Brompheniramine Maleate is an antihistamine having the chemical name 2-pyridinepropanamine, -[4-bromophenyl)-N,N-dimethyl-,(±)-,[Z]-2-butenedioate (1:1) with the following chemical structure:

Pseudoephedrine Hydrochloride is a nasal decongestant with the chemical name, Benzenemethanol,-[1-(methylamino)ethyl]-,[S-(R*,R*)],hydrochloride. Its structure is as follows:

Brompheniramine Maleate
Brompheniramine Maleate is a histamine antagonist, specifically an H1-receptor-blocking agent belonging to the alkylamine class of antihistamines. Antihistamines appear to compete with histamine for receptor sites on effector cells. Brompheniramine also has anticholinergic (drying) and sedative effects. Among the antihistaminic effects, it antagonizes the allergic response (vasodilatation, increased vascular permeability, increased mucus secretion) of nasal tissue. Brompheniramine is well absorbed from the gastrointestinal tract, with peak plasma concentration after a single, oral dose of 4 mg reached in 5 hours; urinary excretion is the major route of elimination, mostly as products of biodegradation; the liver is assumed to be the main site of metabolic transformation.

Indications and Usage for Brompheniramine and Pseudoephedrine Drops

Patients with hypersensitivity or idiosyncrasy to any of its ingredients. Do not use in newborn infants, premature infants, in nursing mothers, in patients with severe hypertension, severe coronary artery disease, ischemic heart disease, or in those receiving monoamine oxidase (MAO) inhibitors. Antihistamines are contraindicated in patients with narrow-angle glaucoma, urinary retention, peptic ulcer, and during an asthma attack. Antihistamines should not be used to treat lower respiratory tract conditions including asthma.

Antihistamines may diminish mental alertness, and may cause hyperexcitability especially in children. At doses higher than the recommended dose, nervousness, dizziness, or sleeplessness may occur. Especially in infants and small children, antihistamines in overdosage may cause hallucinations, convulsions, and death. Use with caution in patients with hypertension, ischemic heart disease, and persons older than 60 years old. Do not give this product to children who have a chronic pulmonary disease, breathing problems such as chronic bronchitis, glaucoma, or those who are taking sedatives or tranquilizers without first consulting with a doctor. Considerable caution should be exercised in patients with hypertension, diabetes mellitus, ischemic heart disease, hyperthyroidism, increased intraocular pressure and prostatic hypertrophy. Do not exceed the recommended dosage. If nervousness, dizziness, or sleeplessness occurs, discontinue use and consult a doctor.

Information for Patients (or Parents)
Patients (or parents) should be warned about engaging in activities requiring mental alertness. In mild cases or in particularly sensitive patients, less frequent doses may be adequate.

Drug Interactions
Do not use this medication in a child who is taking a prescription monoamineoxidase (MAO) inhibitor (certain drugs used for depression, psychiatric or emotional conditions, or Parkinson’s disease), or for 2 weeks after stopping the MAO inhibitor. MAO inhibitors prolong and intensify the anticholinergic effects of antihistamines and may enhance the effect of pseudoephedrine HCl. Sympathomimetic agents may reduce the effects of anti-hypertensive drugs. Antihistamines have additive effects with alcohol and other CNS (central nervous system) depressants (hypnotics, sedatives, tranquilizers, anti-anxiety agents, etc.)

Carcinogenesis, Mutagenesis, Impairment of Fertility
Studies have not been performed to assess the carcinogenic and mutual potential of Brompheniramine Maleate 1 mg and Pseudoephedrine HCl 7.5 mg Drops or its effects on fertility.

Pregnancy, Teratogenic Effects – Pregnancy Category C
Animal reproductive studies have not been performed with Brompheniramine Maleate 1 mg and Pseudoephedrine HCl 7.5 mg Drops. It is also not known if it can cause fetal harm when administered to a pregnant woman or can affect reproduction capacity. Brompheniramine Maleate 1 mg Drops should be given to a pregnant women only if clearly needed.

Nursing Mothers
Because of the higher risk of intolerance of antihistamines in small infants generally, and in newborns and prematures in particular, Brompheniramine Maleate 1 mg and Pseudoephedrine HCl 7.5 mg Drops is contraindicated in nursing mothers.

Geriatric Use
The elderly (60 years of age or older) are more likely to experience adverse reactions. Caution should be taken when prescribing this drug to the elderly.

Signs and Symptoms
Central nervous system effects from overdosage of brompheniramine may vary from depression to stimulation, especially in children. Anticholinergic effects may also occur. Overdosage of pseudoephedrine may result in CNS stimulation, tachycardia, hypertension and cardiac arhythmias, signs of CNS depression may occasionally be seen.

Treatment
Include emesis if patient is alert and is seen prior to 6 hours following ingestion. Precautions against aspiration must be taken, especially in infants and small children. Gastric lavage may be carried out, but in some cases tracheotomy may be needed prior to lavage. For CNS hyperactivity or convulsive seizures, intravenous shortacting barbiturates may be indicated. Hypertensive responses and/or tachycardia should be treated appropriately. Oxygen, intravenous fluids and other supportive measures should be used as indicated.

Take by mouth only.

Do not exceed 4 doses during a 24-hour period.
*In mild cases or in particularly sensitive patients, less frequent or reduced doses may be adequate.

How is Brompheniramine and Pseudoephedrine Drops Supplied

Storage
Store at 25°C (77°F); excursions permitted to 15-30°C (59-86°F). Dispense in a tight, light resistant container as defined is the USP/NF- with a child resistant cap. Dispense in the original container. Avoid exposure to excessive heat. Keep tightly closed.

WARNING: KEEP THIS AND ALL MEDICATIONS OUT OF THE REACH OF CHILDREN. IN CASE OF ACCIDENTAL OVERDOSE, SEEK PROFESSIONAL ASSISTANCE OR CONTACT A POISON CONTROL CENTER IMMEDIATELY. 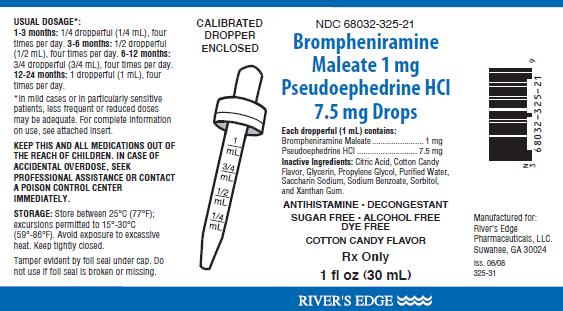 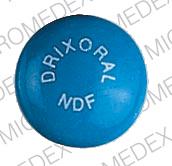