ATryn® is a recombinant antithrombin indicated for the prevention of peri-operative and peri-partum thromboembolic events in hereditary antithrombin deficient patients1.

It is not indicated for treatment of thromboembolic events in hereditary antithrombin deficient patients.

AT Activity Monitoring and Dose Adjustment

AT activity monitoring is required for proper treatment. Check AT activity once or twice per day with dose adjustments made according to Table 2.

ATryn is a sterile white to off white lyophilized powder supplied in single-use vials containing nominal potencies of 525 IU or 1750 IU. The actual potency is labeled on each vial and carton.

ATryn is contraindicated in patients with known hypersensitivity to goat and goat milk proteins.

Allergic-type hypersensitivity reactions are possible. Patients must be closely monitored and carefully observed for any symptoms throughout the infusion period. Patients should be informed of the early signs of hypersensitivity reactions including hives, generalized urticaria, tightness of the chest, wheezing, hypotension, and anaphylaxis. If these symptoms occur during administration, treatment must be discontinued immediately and emergency treatment should be administered.

The anticoagulant effect of drugs that use antithrombin to exert their anticoagulation may be altered when ATryn is added or withdrawn. To avoid excessive or insufficient anticoagulation, coagulation tests suitable for the anticoagulant used (e.g., aPTT and anti-Factor Xa activity) are to be performed regularly, at close intervals, and in particular in the first hours following the start or withdrawal of ATryn. Additionally, monitor the patients for the occurrence of bleeding or thrombosis in such situation.

Adverse reactions that occurred in clinical trials with hereditary AT deficient patients are shown in Table 4 by System Organ Class.

Table 4: Adverse Reactions in Hereditary AT Deficient Patients
(one per patient, 2% of total population, n=47)

As with all therapeutic proteins, there is a potential for immunogenicity. The detection of antibody formation is highly dependent on the sensitivity and specificity of the assay. Additionally, the observed incidence of antibody (including neutralizing antibody) positivity in an assay may be influenced by several factors including assay methodology, sample handling, timing of sample collection, concomitant medications, and underlying disease. For these reasons, comparison of the incidence of antibodies to antithrombin (Recombinant) in the studies described below with the incidence of antibodies in other studies or to other products may be misleading.

In clinical trials, serum samples were collected from individuals before treatment and at various time points (1, 7, 21-30, 60 and 90 days) after one or more treatments with ATryn. Samples were screened by enzyme-linked immunosorbent assays (ELISA) for IgM and IgG antibodies to antithrombin (Recombinant). Serum samples that were screen-positive were tested by a confirmatory assay: either a radio-immunoprecipitation assay or by an inhibition of binding dose response ELISA. Samples that were confirmed positive in the confirmatory assay were to be tested using a thrombin inhibitory activity assay to assess the endogenous antithrombin level.

No confirmed specific immunological reaction was seen in any of the patients tested, nor were there any clinical adverse reactions that might indicate such a response.

In post-marketing patient registry studies, seven patients (four pregnant, three surgical) were enrolled in the studies after a single exposure to ATryn. Patient serum samples were collected within one week from initiation of treatment and on days 1, 7 and 28 days from initiation of treatment and were tested to detect antibodies against antithrombin (Recombinant), goat and goat milk proteins. No antibodies were detected.

ATryn is indicated for the treatment of pregnant women during the peri-partum period. Pregnant patients who need a surgical procedure other than Cesarean section are to be treated according to the dosing formula for pregnant patients.

In rats, a dose of 210 mg/kg/day ATryn (5-6 times the human dose for pregnant women) administered during most of the pregnancy and entire lactation showed a slight but statistically significant increase in pup mortality in day one through day four when compared to concurrent control (90% compared to 94% viability index for 210 mg/kg/day versus control). This slight statistical difference does not reflect a true treatment-related effect. This same dose was shown to be safe in a second rat study when administered around parturition and during lactation where the no adverse effect level for dam and pups was 210 mg/kg/day.

There are no adequate and well-controlled studies in pregnant women. Because animal reproductive studies are not always predictive of human response, this drug should be used during pregnancy only if clearly needed.

Studies in pregnant women have not shown that ATryn increases the risk of fetal abnormalities if administered during the third trimester of pregnancy. In clinical trials in hereditary AT deficient patients, 22 pregnant women have been treated with ATryn around parturition.

No adverse reactions were reported in 22 neonates born from pregnant women treated with ATryn during clinical trials.

ATryn is present in breast milk at levels estimated to be 1/50 to 1/100 of its concentration in the blood. This level is the same as that estimated to be present in breast milk of normal lactating women which is not known to be harmful to breastfed neonates. However, caution should be exercised when ATryn is administered to a nursing woman. Use only if clearly needed.

In 2 reproductive toxicology studies performed in rats, antithrombin (Recombinant) was administered to pregnant dams at doses up to 210 mg/kg/day, resulting in supraphysiologic plasma levels of antithrombin. Pups were allowed to breastfeed and were monitored for changes in prothrombin (PT) or aPTT, as well as pup viability, body weight at birth, growth, and development. In these studies, there were no adverse effects in offspring who consumed milk from dams treated with ATryn.

Clinical studies of ATryn did not include sufficient numbers of subjects aged 65 and over to determine whether they respond differently from younger subjects. In general, dose selection for an elderly patient should be cautious, usually starting at the low end of the dosing range, reflecting the greater frequency of decreased hepatic, renal, or cardiac function, and of concomitant disease or other drug therapy.

ATryn is a sterile white to off white lyophilized powder supplied in single-use vials containing nominal potencies of 525 IU or 1750 IU. The actual potency is labeled on each vial and carton. Antithrombin (Recombinant), active ingredient of ATryn, is a recombinant human antithrombin. It is a 432 amino acid glycoprotein with a molecular weight of approximately 57,215 Daltons. The molecular formula is: C2191H3457N583O656S18. Antithrombin (Recombinant) is produced by recombinant DNA technology using genetically engineered goats into which the DNA coding sequence for human antithrombin has been introduced along with a mammary gland specific DNA sequence, which directs the expression of the antithrombin into the milk. The goats in which antithrombin (Recombinant) is produced are USDA certified scrapie-free, and controlled for specific pathogens.

ATryn does not contain any preservatives nor is it formulated with human plasma proteins. Antithrombin (Recombinant) is affinity purified using a heparin immobilized resin and contains no detectable heparin (<0.0002 IU heparin per IU antithrombin) in the final product.

In addition, although the goats are from a closed, USDA certified scrapie-free herd, the purification process was challenged to remove prions. The manufacturing steps were shown capable of achieving the following log10 reductions: 2.0 (tangential filtration), 2.2 (affinity column), ≥ 3.3 (ion exchange column), ≥ 3.8 (hydrophobic interaction column).

Hereditary AT deficiency causes an increased risk of venous thromboembolism (VTE). During high-risk situations such as surgery or trauma or for pregnant women, during the peri-partum period, the risk of development of VTEs as compared to the normal population in these situations is increased by a factor 10 to 504,5,6.

In an open-label, single dose pharmacokinetic study, male and female patients (≥ 18 years of age) with hereditary AT deficiency, received either 50 (n = 9, all females) or 100 (n = 6, 2 males and 4 females) IU/kg ATryn intravenously. These patients were not in high-risk situations. The baseline corrected pharmacokinetic parameters for antithrombin (Recombinant) are summarized in Table 6.

Pharmacokinetics may be influenced by concomitant heparin administration, as well as surgical procedures, delivery, or bleeding. AT activity monitoring (see 2.1 Dose and Schedule) should be performed to properly treat such patients.

13.1 Carcinogenesis, Mutagenesis, and Impairment of Fertility

Carcinogenesis: No carcinogenicity data for ATryn are available in animals or humans.

Mutagenesis and Genotoxicity: ATryn was not mutagenic when tested in the Ames bacterial test and in in vitro cytogenetic assays nor was it shown to be genotoxic when tested in an in vivo test to assess chromosomal aberration.

Impairment of Fertility: No studies have been conducted to evaluate the effects of ATryn on fertility in humans.

Pharmacokinetic and toxicokinetic (1 single, 2 repeated dose) studies of antithrombin (Recombinant) were performed in mice, rats, dogs and monkeys. In toxicokinetic studies in monkeys the area under the curve was 3-4 times greater than in the rat at all doses used.

The toxicological profile of antithrombin (Recombinant) administered by the intravenous route as bolus injections and infusions has been evaluated in both single- and repeat-dose studies performed in rats, dogs, and monkeys across a range of doses from 2.1 to 360 mg/kg. The highest doses in the single dose toxicity studies in rats and dogs were 360 mg/kg and 210 mg/kg, respectively. Toxicities observed were limited to transient injection site swelling observed in rats and dogs at the highest doses tested, and increased AST at highest dose in the dog study, both resolved during recovery period.

The efficacy of ATryn to prevent the occurrence of venous thromboembolic events was assessed by comparing the incidence of the occurrence of such events in 31 ATryn treated hereditary AT deficient patients with the incidence in 35 human plasma-derived AT treated hereditary AT deficient patients. Data on ATryn-treated patients were derived from two prospective, single-arm, open-label studies. Data on plasma AT treated patients were collected from a prospectively designed concurrently conducted retrospective chart review. Patients in both studies had confirmed hereditary AT deficiency (AT activity ≤ 60% of normal) and a personal history of thromboembolic events. Patients had to be treated in the peri-operative and peri-partum period. ATryn was administered as a continuous infusion for at least 3 days, starting one day prior to the surgery or delivery. Plasma AT was administered for at least two days as single bolus infusions. Due to the retrospective nature of the study, dosing was done with the locally available AT concentrate according to the local practice.

In the ATryn-treated group there was one confirmed diagnosis of an acute deep vein thrombosis (DVT). The incidence of any thromboembolic event from the start of treatment to 7 days after last dosing is summarized by treatment group in Table 7as are the Clopper-Pearson exact 95% CI for the proportion of patients with a thromboembolic event and the exact 95% lower confidence bound for the difference between treatments.

The lower 95% confidence bound of difference between treatment groups was -0.167, a value that is greater than the pre-specified lower confidence bound of -0.20. This demonstrates that ATryn was non-inferior to plasma AT in terms of the prevention of peri-operative or peri-partum thromboembolic events.

Supportive data come from a study in the same population with 5 hereditary AT deficient patients treated on 6 occasions in a compassionate use program and provides additional reassurance of the efficacy of ATryn. None of these patients reported a thromboembolic event7.

Approximately 525 IU/vial in a sterile white to off white lyophilized powder for reconstitution. Each carton contains one single dose vial of ATryn.

The actual potency of ATryn is stated on the vial label and carton.

Approximately 1750 IU/vial in a sterile white to off white lyophilized powder for reconstitution. Each carton contains one single dose vial of ATryn.

The actual potency of ATryn is stated on the vial label and carton.

Do not use product beyond the expiration date printed on the package. Discard unused portions.

Vial stopper is not made with natural latex rubber.

Patients should be informed: 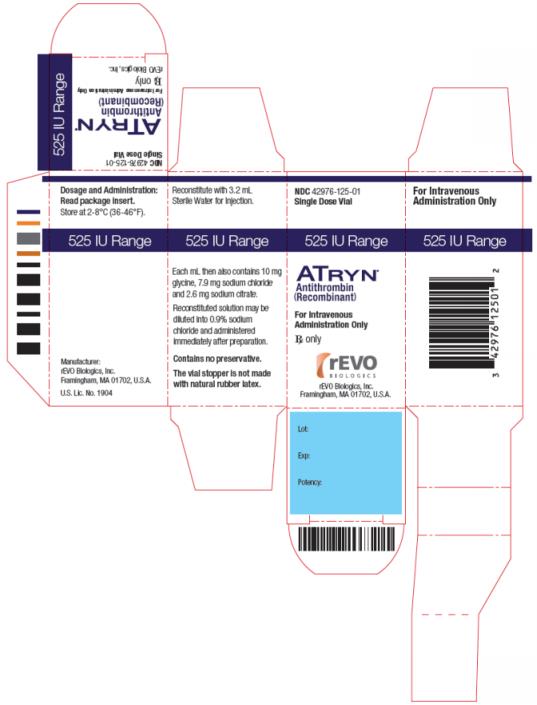 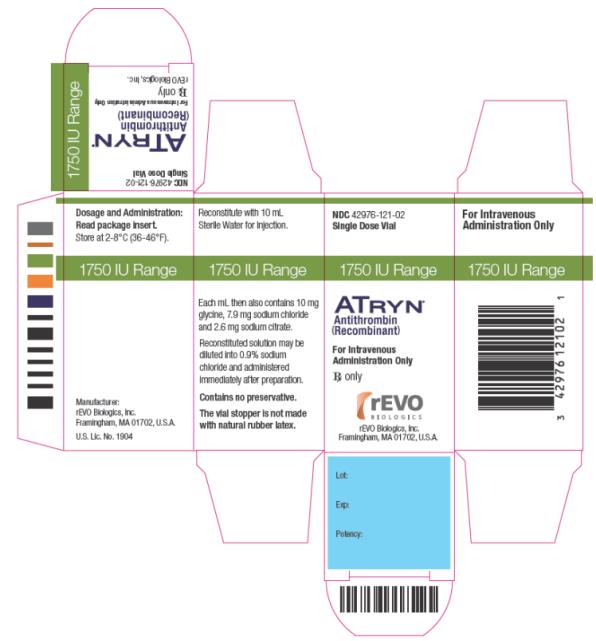