Indications and Usage for Acetadote

Acetadote is indicated to prevent or lessen hepatic injury after ingestion of a potentially hepatotoxic quantity of acetaminophen in patients with acute ingestion or from repeated supratherapeutic ingestion (RSI).

Acetadote is an antidote for acetaminophen overdose. The critical ingestion-treatment interval for maximal protection against severe hepatic injury is between 0 – 8 hours. Efficacy diminishes progressively after 8 hours and treatment initiation between 15 and 24 hours post-ingestion of acetaminophen yields limited efficacy. However, it does not appear to worsen the condition of patients and it should not be withheld, since the reported time of ingestion may not be correct.

The nomogram may underestimate the hepatotoxicity risk in patients with chronic alcoholism, malnutrition, or CYP2E1 enzyme inducing drugs (e.g., isoniazid), and consideration should be given to treating these patients even if the acetaminophen concentrations are in the nontoxic range.

For patients whose acetaminophen concentrations are at or above the “possible” toxicity line (dotted line in nomogram):

For patients whose values are below the “possible” toxicity line, but time of ingestion was unknown or sample was obtained less than 4 hours after ingestion:

For patients whose values are below the “possible” toxicity line and time of ingestion is known and the sample was obtained more than 4 hours after ingestion, do not administer Acetadote because there is minimal risk of hepatotoxicity. 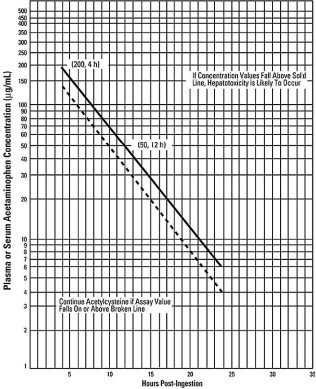 Determine need for continued treatment with Acetadote after the loading dose. Choose ONE of the following based on the acetaminophen concentration:

The acetaminophen concentration is above the possible toxicity line according to the nomogram (see Figure 1):

The acetaminophen concentration could not be obtained:

For patients whose acetaminophen concentration is below the “possible” toxicity line (see Figure 1) and time of ingestion is known and the sample was obtained more than 4 hours after ingestion:

The acetaminophen concentration was in the non-toxic range, but time of ingestion was unknown or less than 4 hours:

Continued Therapy After Completion of Loading and Maintenance Doses

In cases of suspected massive overdose, or with concomitant ingestion of other substances, or in patients with preexisting liver disease; the absorption and/or the half-life of acetaminophen may be prolonged. In such cases, consideration should be given to the need for continued treatment with Acetadote beyond a total of three separate doses over a 21-hour infusion period.

Acetaminophen levels and ALT/AST and INR should be checked after the last maintenance dose. If acetaminophen levels are still detectable, or if the ALT/AST are still increasing or the INR remains elevated; dosing should be continued and the treating physician should contact a US regional poison center at 1-800-222-1222, alternatively, a “special health professional assistance line for acetaminophen overdose” at 1-800-525-6115 for assistance with dosing recommendations, or 1-877-484-2700 for additional information.

Preparation and Storage of Acetadote Diluted Solution Prior to Administration

Because Acetadote is hyperosmolar (2600 mOsmol/L), Acetadote must be diluted in sterile water for injection, 0.45% sodium chloride injection (1/2 normal saline), or 5% dextrose in water prior to intravenous administration [see Warnings and Precautions (5.2)]. Dilution in these three solutions results in different osmolarity of the solution for intravenous administration (see Table 1 for examples of different osmolarity of the solution depending on the type of solution and the Acetadote concentration).

Visually inspect for particular matter and discoloration prior to administration. The color of the diluted solution ranges from colorless to a slight pink or purple once the stopper is punctured (the color change does not affect the quality of the product). The diluted solution can be stored for 24 hours at room temperature. Discard unused portion. If a vial was previously opened, do not use for intravenous administration.

Recommended Dosage in Adults and Pediatrics for Acute Acetaminophen Ingestion

Acetadote is for intravenous administration only.

For specific Acetadote dosage and administration information in patients with RSI, consider contacting your regional poison center at 1-800-222-1222, or alternatively, a special health professional assistance line for acetaminophen overdose at 1-800-525-6115.

Acetadote is contraindicated in patients with a previous hypersensitivity reaction to acetylcysteine [see Warnings and Precautions (5.1)].

Serious acute hypersensitivity reactions during acetylcysteine administration including rash, hypotension, wheezing, and/or shortness of breath, have been observed in patients receiving intravenous acetylcysteine for acetaminophen overdose and occurred soon after initiation of the infusion [see Adverse Reactions (6.1)]. If a severe hypersensitivity reaction occurs, immediately stop the infusion of Acetadote and initiate appropriate treatment.

The total volume of Acetadote administered should be adjusted for patients less than 40 kg and for those requiring fluid restriction. To avoid fluid overload, the volume of diluent should be reduced as needed [see Dosage and Administration (2)]. If volume is not adjusted fluid overload can occur, potentially resulting in hyponatremia, seizure and death.

In a randomized, open-label, multi-center clinical study conducted in Australia in patients with acetaminophen poisoning, the rates of hypersensitivity reactions between a 15-minute and 60-minute intravenous infusion for the 150 mg/kg loading dose of acetylcysteine were compared.

The incidence of drug-related adverse reactions occurring within the first 2 hours following acetylcysteine administration is presented in Table 5. Overall, 17% of patients developed an acute hypersensitivity reaction (18% in the 15-minute infusion group; 14% in the 60-minute infusion group) [see Warnings and Precautions (5.1), Clinical Studies (14)].

A large multi-center study was performed in Canada where data were collected from patients who were treated with intravenous acetylcysteine for acetaminophen overdose between 1980 and 2005. This study evaluated 4709 adult cases and 1905 pediatric cases. The incidence of hypersensitivity reactions in adult (overall incidence 8%) and pediatric (overall incidence 10%) patients is presented in Tables 6 and 7.

Acetaminophen and acetylcysteine cross the placenta. Delaying treatment in pregnant women with acetaminophen overdose and potentially toxic acetaminophen plasma levels may increase the risk of maternal and fetal morbidity and mortality.

An initial 150 mg/kg dose of acetylcysteine for a patient weighting 106 kg was mistakenly calculated as 160 g (a decimal point error resulting in a 10-fold higher than prescribed dose). An hour after the infusion started, the patient complained of generalized heat sensation and body pain and developed widespread urticaria and hypotension. The second acetylcysteine infusion was withheld and the patient was treated for anaphylaxis. Despite treatment the patient subcomed to the acute inflammatory reaction and died.

Single intravenous doses of acetylcysteine at 1000 mg/kg in mice, 2445 mg/kg in rats, 1500 mg/kg in guinea pigs, 1200 mg/kg in rabbits and 500 mg/kg in dogs were lethal. Symptoms of acute toxicity in the animals were ataxia, hypoactivity, labored respiration, cyanosis, loss of righting reflex and convulsions.

Acetylcysteine injection is an intravenous antidote for the treatment of acetaminophen overdose. Acetylcysteine is the nonproprietary name for the N-acetyl derivative of the naturally occurring amino acid, L-cysteine (N-acetyl-L-cysteine,). The compound is a white crystalline powder, which melts in the range of 104° to 110°C and has a very slight odor.

The molecular formula of the compound is C5H9NO3S, and its molecular weight is 163.2. Acetylcysteine has the following structural formula:

Acetadote is supplied as a sterile solution in vials containing 20% w/v (200 mg/mL) acetylcysteine. The pH of the solution ranges from 6.0 to 7.5. Acetadote contains the following inactive ingredients: sodium hydroxide (used for pH adjustment), and Water for Injection, USP.

Acetylcysteine has been shown to reduce the extent of liver injury following acetaminophen overdose. Acetaminophen doses of 150 mg/kg or greater have been associated with hepatotoxicity. Acetylcysteine probably protects the liver by maintaining or restoring the glutathione levels, or by acting as an alternate substrate for conjugation with, and thus detoxification of, the reactive metabolite of acetaminophen.

After a single intravenous dose of acetylcysteine, the plasma concentration of total acetylcysteine declined in a poly-exponential decay manner with a mean terminal half-life (T1/2) of 5.6 hours. The mean clearance (CL) for acetylcysteine was 0.11 liter/hr/kg and renal CL constituted about 30% of the total CL.

After a single oral dose of [35S]-acetylcysteine 100 mg, between 13 to 38% of the total radioactivity administered was recovered in urine within 24 hours. In a separate study, renal clearance was estimated to be approximately 30% of total body clearance.

Hemodialysis may remove some of total acetylcysteine.

Long-term studies in animals have not been performed to evaluate the carcinogenic potential of acetylcysteine.

Acetylcysteine was not genotoxic in the Ames test or the in vivo mouse micronucleus test. It was, however, positive in the in vitro mouse lymphoma cell (L5178Y/TK+/-) forward mutation test.

Treatment of male rats with acetylcysteine at an oral dose of 250 mg/kg/day for 15 weeks (0.1 times the recommended total human intravenous dose of 300 mg/kg based on body surface comparison) did not affect the fertility or general reproductive performance.

A randomized, open-label, multi-center clinical study was conducted in Australia in patients with acetaminophen poisoning to compare the rates of hypersensitivity reactions between two rates of infusion for the intravenous acetylcysteine loading dose. One hundred nine subjects were randomized to a 15-minute infusion rate and seventy-one subjects were randomized to a 60 minute infusion rate. The loading dose was 150 mg/kg followed by a maintenance dose of 50 mg/kg over 4 hours and then 100 mg/kg over 16 hours. Of the 180 patients, 27% were male and 73% were female. Ages ranged from 15 to 83 years, with the mean age being 30 years (±13.0).

Do not use previously opened vials for intravenous administration.

Note: The color of Acetadote may turn from essentially colorless to a slight pink or purple once the stopper is punctured. The color change does not affect the quality of the product.

Advise patients and caregivers that hypersensitivity reactions related to administration and infusion may occur during and after Acetadote treatment, including hypotension, wheezing, shortness of breath and bronchospasm [see Warnings and Precautions (5.1)].

MUST BE FURTHER DILUTED
PRIOR TO INTRAVENOUS USE

MUST BE FURTHER DILUTED
PRIOR TO INTRAVENOUS USE 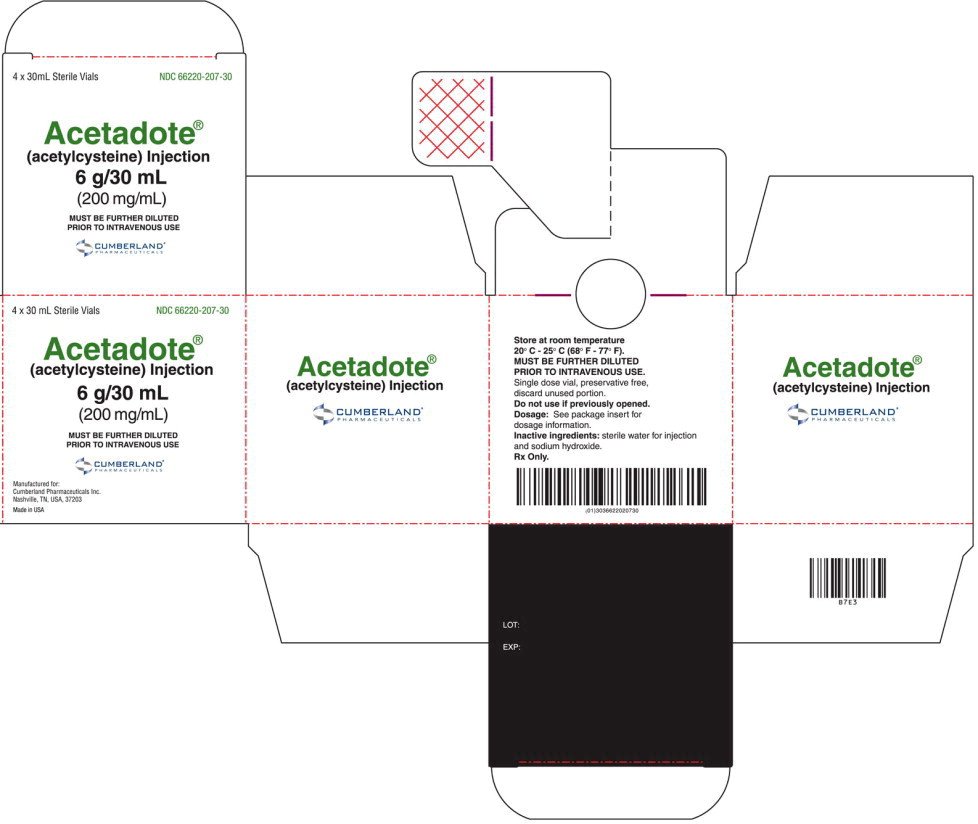