Trichinosis (trik-ih-NO-sis), sometimes called trichinellosis (trik-ih-nuh-LOW-sis), is a type of roundworm infection. Roundworm parasites use a host body to live and reproduce. These parasites primarily infect meat-eating animals (carnivores) such as bears and foxes, or meat- and plant-eating animals (omnivores) such as domestic pigs and wild boars. The infection is acquired by eating roundworm larvae in raw or undercooked meat.

When humans eat undercooked meat containing trichinella larvae, the larvae mature into adult worms in the small intestine over several weeks. The adult worms then produce larvae that travel through various tissues, including muscle. Trichinosis is most widespread in rural areas throughout the world.

Trichinosis can be treated with medication, though it's not always necessary. It's also easy to prevent.

Signs and symptoms of trichinosis infection and their severity vary depending on the number of larvae consumed in the infected meat. Abdominal symptoms can occur one to two days after infection. Other symptoms usually start two to eight weeks after infection.

Possibly no signs or symptoms

Mild cases of trichinosis — those with only a small number of parasites in your body — may cause no recognizable signs or symptoms. Symptoms can develop with moderate or heavy infestation, sometimes progressing as the parasite travels through your body.

You swallow trichinella larvae encased in a cyst. Your digestive juices dissolve the cyst, releasing the parasite into your body. The larvae then penetrate the wall of the small intestine, where they mature into adult worms and mate. At this stage, you may experience:

About a week after infection, the adult female worms produce larvae that go through the intestinal wall, enter your bloodstream, and eventually burrow into muscle or other tissue. This tissue invasion can cause:

If you have a mild case of trichinosis with no symptoms, you might not need medical attention. If you experience gastrointestinal problems or muscle pain and swelling about a week after eating pork or wild-animal meat, talk to your doctor. 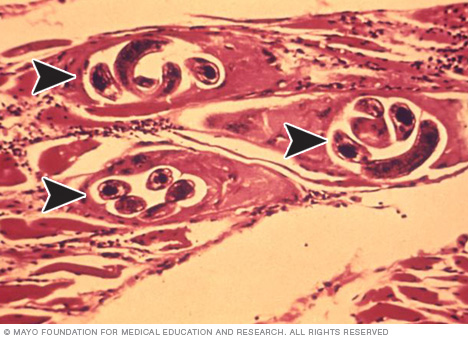 After you eat trichinella larvae, they mature into adult worms in your small intestine. The adults then produce larvae that migrate through various tissues, including muscle tissue, shown here.

Due to increased regulation of pork feed and products in the United States, pigs have become a less common source of infection. Wild animals, including bear, continue to be sources of infection.

Risk factors for trichinosis include:

Except in severe cases, complications related to trichinosis are rare. In cases of heavy infestation, larvae can migrate to vital organs, causing potentially dangerous, even fatal, complications, including:

The best defense against trichinosis is proper food preparation. Follow these tips to avoid trichinosis:

Trichinella larvae travel from the small intestine through the arteries to bury themselves inside muscle tissue, so stool sample tests don't often show evidence of the parasite. Your doctor can diagnose trichinella infection by performing a physical exam and discussing your signs and symptoms such as swelling around the eyes, muscle inflammation and fever.

To confirm the diagnosis, your doctor might use these tests:

Trichinosis usually isn't serious and often gets better on its own, usually within a few months. However, fatigue, mild pain, weakness and diarrhea may linger for months or years. Your doctor may prescribe medications depending on your symptoms and the severity of infection.

You're likely to start by seeing your family doctor. In some cases, you may be referred to an infectious disease specialist.

Preparing a list of questions will help you make the most of your time with your doctor. For trichinosis, some basic questions to ask your doctor include:

Questions your doctor is likely to ask include: