Scorpion stings are painful but rarely life-threatening. Young children and older adults are most at risk of serious complications.

In the United States, the bark scorpion, found mainly in the desert Southwest, is the only scorpion species with venom potent enough to cause severe symptoms. Worldwide, only about 30 of the estimated 1,500 species of scorpions produce venom toxic enough to be fatal. But with more than a million scorpion stings taking place each year, deaths from these stings are a significant public health problem in areas where access to medical care is limited.

Healthy adults usually don't need treatment for scorpion stings. But a scorpion sting can have serious effects in young children. 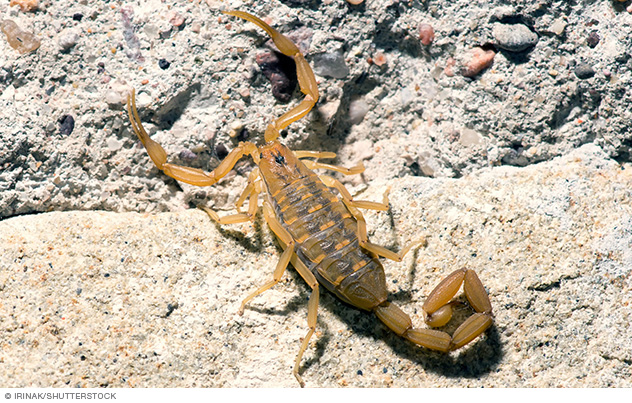 The bark scorpion is commonly found in the desert of the southwestern United States.

Signs and symptoms at the site of a scorpion sting may include:

Signs and symptoms related to widespread (systemic) venom effects usually occur in children who are stung and may include:

As with other stinging insects, such as bees and wasps, it is possible for people who have previously been stung by scorpions to have allergic reactions with subsequent stings. Reactions to these subsequent stings are sometimes severe enough to cause a life-threatening condition called anaphylaxis. Signs and symptoms in these cases are similar to those of anaphylaxis caused by bee stings and can include hives, trouble breathing, and nausea and vomiting.

Get immediate medical care for a child stung by a scorpion.

Seek prompt medical care if you've been stung by a scorpion and begin to experience severe symptoms.

A scorpion sting is caused by the stinger in a scorpion's tail. When a scorpion stings, its stinger can release venom. The venom contains a complex mix of toxins that affect the nervous system (neurotoxins).

Scorpions are arthropods — a relative of insects, spiders and crustaceans. Bark scorpions are about 2 inches (5 centimeters) long. Scorpions have eight legs and a pair of lobster-like pinchers and a tail that curves up. Scorpions are nocturnal creatures that resist stinging unless provoked or attacked.

Certain activities can increase your risk of a scorpion sting:

The very old and the very young are most likely to die of untreated venomous scorpion stings. The cause is usually heart or respiratory failure occurring some hours after the sting. Very few deaths from scorpion stings have been reported in the United States.

Another possible complication of scorpion stings, though rare, is a severe allergic reaction (anaphylaxis).

Scorpions tend to avoid contact. If you live in an area where scorpions are common, prevent chance meetings by doing the following:

Scorpions glow under a black light, so you might want to use one at night to inspect your surroundings. If you find a scorpion, use tongs to gently move it away from people.

Your history and symptoms are usually all your doctor needs to make a diagnosis. If you have severe symptoms, you may have blood or imaging tests to check for the effects of the venom on your liver, heart, lungs and other organs.

Most scorpion stings don't need medical treatment. But if symptoms are severe, you may need to receive care in a hospital. You may be given drugs through a vein (intravenously) to treat pain.

If a scorpion stings you or your child, follow the suggestions below. Healthy adults may not need further treatment, and these tips can help keep children safe until they see a doctor:

Check your or your child's vaccination records to be sure a tetanus vaccine is up to date.