Proctitis is inflammation of the lining of the rectum. The rectum is a muscular tube that's connected to the end of your colon. Stool passes through the rectum on its way out of the body.

Proctitis can cause rectal pain, diarrhea, bleeding and discharge, as well as the continuous feeling that you need to have a bowel movement. Proctitis symptoms can be short-lived, or they can become chronic.

Proctitis is common in people who have inflammatory bowel disease (Crohn's disease or ulcerative colitis). Sexually transmitted infections are another frequent cause. Proctitis also can be a side effect of radiation therapy for certain cancers.

Proctitis signs and symptoms may include:

Make an appointment with your doctor if you have any signs or symptoms of proctitis.

Several diseases and conditions can cause inflammation of the rectal lining. They include:

Risk factors for proctitis include:

Proctitis that isn't treated or that doesn't respond to treatment may lead to complications, including:

If you're diagnosed with a sexually transmitted infection, stop having sex until after you've completed treatment. Ask your doctor when it's safe to have sex again.

Tests and procedures used to diagnose proctitis include: 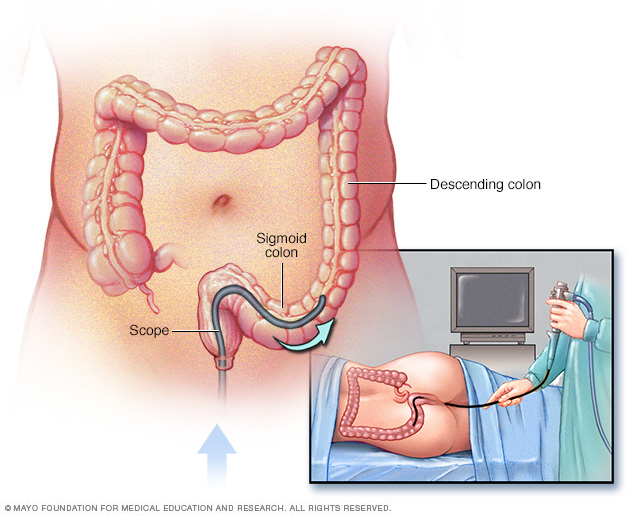 During a flexible sigmoidoscopy exam, the doctor inserts a sigmoidoscope into your rectum to check for abnormalities in your lower colon.

During a colonoscopy, the doctor inserts a colonoscope into your rectum to check for abnormalities in your entire colon.

Treatment for proctitis depends on the underlying cause of the inflammation.

Treatment for proctitis caused by an infection

Your doctor may recommend medications to treat your infection. Options may include:

Treatment of proctitis related to Crohn's disease or ulcerative colitis is aimed at reducing the inflammation in your rectum. Treatment may include:

Start by seeing your family doctor or a general practitioner if you have rectal pain or bleeding, or if you continuously feel the need to have a bowel movement. If your doctor suspects you may have proctitis, you may be referred to a doctor who specializes in diseases of the digestive system (gastroenterologist).

Here's some information to help you get ready and to know what to expect from your doctor.