Legg-Calve-Perthes (LEG-kahl-VAY-PER-tuz) disease is a childhood condition that occurs when blood supply to the ball part (femoral head) of the hip joint is temporarily interrupted and the bone begins to die.

This weakened bone gradually breaks apart and can lose its round shape. The body eventually restores blood supply to the ball, and the ball heals. But if the ball is no longer round after it heals, it can cause pain and stiffness. The complete process of bone death, fracture and renewal can take several years.

To keep the ball part of the joint as round as possible, doctors use a variety of treatments that keep it snug in the socket portion of the joint. The socket acts as a mold for the fragmented femoral head as it heals. 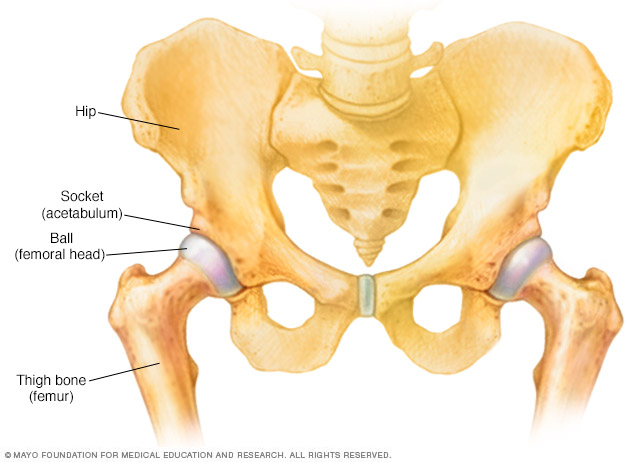 The hip joint is a ball-and-socket joint. The ball (femoral head) is at the top of the thigh bone (femur) and the socket (acetabulum) is part of the hipbone.

Signs and symptoms of Legg-Calve-Perthes disease include:

Legg-Calve-Perthes disease usually involves just one hip. Both hips are affected in some children, usually at different times.

Make an appointment with your doctor if your child begins limping or complains of hip, groin or knee pain. If your child has a fever or can't bear weight on the leg, seek emergency medical care.

Legg-Calve-Perthes disease occurs when too little blood is supplied to the ball portion of the hip joint (femoral head). Without enough blood, this bone becomes weak and fractures easily. The cause of the temporary reduction in blood flow to the femoral head remains unknown.

Risk factors for Legg-Calve-Perthes disease include:

Children who have had Legg-Calve-Perthes disease are at higher risk of developing hip arthritis in adulthood — particularly if the hip joint heals in an abnormal shape. If the hipbones don't fit together well after healing, the joint can wear out early.

In general, children who are diagnosed with Legg-Calve-Perthes after age 6 are more likely to develop hip problems later in life. The younger the child is at the time of diagnosis, the better the chances for the hip joint to heal in a normal, round shape.

During the physical exam, your doctor might move your child's legs into various positions to check range of motion and see if any of the positions cause pain.

These types of tests, which are vital to the diagnosis of Legg-Calve-Perthes disease, might include:

In Legg-Calve-Perthes disease, the complete process of bone death, fracture and renewal can take several years. The types of treatment recommended will depend on the:

For this molding to work, the femoral head must sit snugly within the socket. Sometimes this can be accomplished with a special type of leg cast that keeps the legs spread widely apart for four to six weeks.

Some children require surgery to help keep the ball of the joint snug within the socket. This procedure might involve making wedge-shaped cuts in the thigh bone or pelvis to realign the joint.

Surgery usually isn't needed for children younger than 6. In this age group, the hip socket is naturally more moldable, so the ball and socket typically continue to fit together well without surgery.

You'll probably first bring your concerns to the attention of your child's doctor. After an initial evaluation, your child might be referred to a doctor who specializes in bone problems in children (pediatric orthopedist).

Before your appointment, you may want to write a list of answers to the following questions:

Your doctor might ask some of the following questions: