Infant reflux, when a baby spits up, occurs when food moves back up from a baby's stomach. Reflux occurs in healthy infants multiple times a day. As long as your baby is healthy, content and growing well, reflux is not a cause for concern.

Sometimes called gastroesophageal reflux (GER), the condition is rarely serious and becomes less common as a baby gets older. It's unusual for infant reflux to continue after age 18 months.

Rarely, infant reflux can be accompanied by worrisome symptoms, such as failure to thrive or weight loss. These can indicate a medical problem, such as an allergy, a blockage in the digestive system or gastroesophageal reflux disease (GERD). 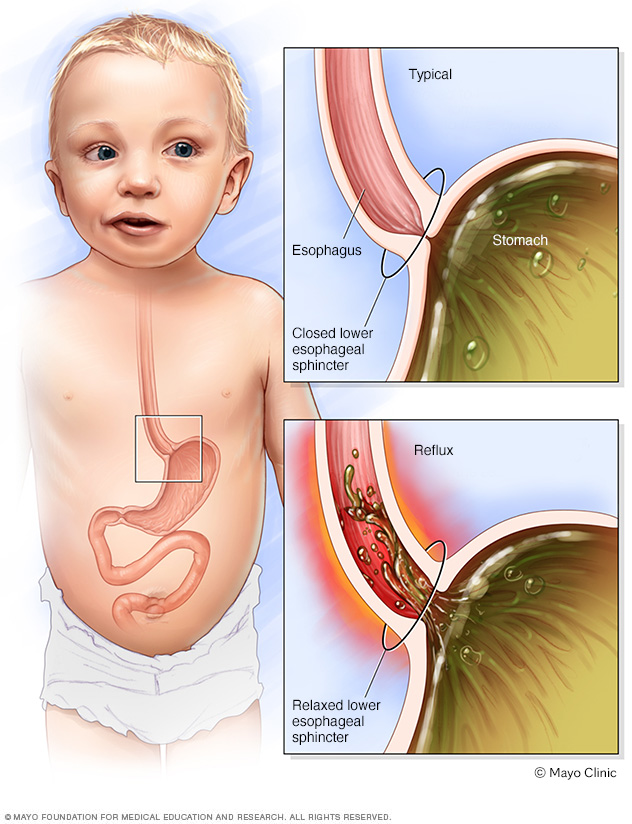 If the muscle between the esophagus and the stomach (lower esophageal sphincter) relaxes when the stomach is full, food might flow up the baby's esophagus.

Infant reflux generally isn't a cause for concern. It's unusual for the stomach contents to have enough acid to irritate the throat or esophagus and to cause signs and symptoms.

See your baby's doctor if your baby:

Some of these signs can indicate possibly serious but treatable conditions, such as GERD or a blockage in the digestive tract.

In infants, the ring of muscle between the esophagus and the stomach — the lower esophageal sphincter (LES) — is not yet fully mature. That allows stomach contents to flow back up. Eventually, the LES will open only when your baby swallows and will remain tightly closed at other times, keeping stomach contents where they belong.

The factors that contribute to infant reflux are common in babies and often can't be avoided. These factors include:

Occasionally, infant reflux can be caused by more-serious conditions, such as:

Infant reflux usually resolves without causing problems for your baby.

If your baby has a more-serious condition such as GERD, he or she might grow poorly. Some research indicates that babies who have frequent episodes of spitting up might be more likely to develop GERD during later childhood.

Your doctor will start with a physical exam and questions about your baby's symptoms. If your baby is healthy, growing as expected and seems content, then testing usually isn't needed. In some cases, however, your doctor might recommend:

For most babies, making some adjustments to feeding will ease infant reflux until it resolves on its own.

Reflux medications aren't recommended for children with uncomplicated reflux. However, a short-term trial of an acid-blocking medication — such as cimetidine (Tagamet HB) or famotidine (Pepcid AC) for infants ages 1 month to 1 year or omeprazole magnesium (Prilosec) for children age 1 year or older — might be recommended if your baby:

Rarely, the lower esophageal sphincter is surgically tightened to prevent acid from flowing back into the esophagus. This procedure is usually done only when reflux is severe enough to prevent growth or to interfere with your baby's breathing.

Remember, infant reflux is usually little cause for concern. Just keep plenty of burp cloths handy as you ride it out.

If reflux continues after your child's first birthday, or if your child is having symptoms such as lack of weight gain and breathing problems, you might be referred to a doctor who specializes in children's digestive diseases (pediatric gastroenterologist).