If treated quickly with appropriate antibiotics, you'll likely recover within a few days. Untreated ehrlichiosis and anaplasmosis can result in serious or life-threatening complications.

The best way to prevent these infections is to avoid tick bites. Tick repellents, thorough body checks after being outside and proper removal of ticks are your best defenses against these tick-borne diseases.

Additional signs and symptoms associated with ehrlichiosis but rarely with anaplasmosis include:

Some people may be infected and not develop symptoms.

The time from getting a bite to showing signs and symptoms is usually five to 14 days. If you develop any of the signs or symptoms after a tick bite or after a possible exposure to ticks, see your doctor.

Ehrlichiosis and anaplasmosis are caused by different bacteria.

Anaplasmosis is caused by the bacterium Anaplasma phagocytophilum. It's primarily carried by deer ticks in the Upper Midwest, northeastern states and central Canadian provinces. It's also carried by the Western black-legged tick in Western coastal states and other tick species in Europe and Asia.

The ehrlichia and anaplasma species belong to the same family of bacteria. Although each bacterium appears to have a specific target among immune system cells in the host, all of these infectious agents generally cause the same symptoms.

Spread of the bacteria causing ehrlichiosis or anaplasmosis is possible through blood transfusions, from mother to fetus, or through direct contact with an infected, slaughtered animal. 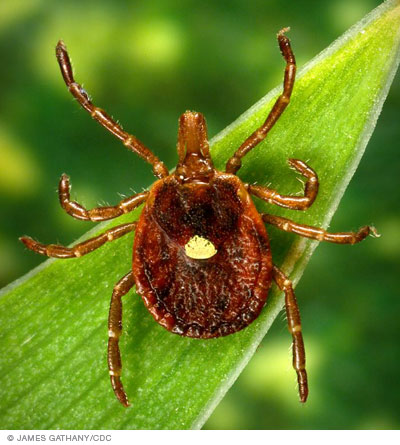 The adult female Lone Star tick displays a characteristic white spot on its back, and may grow to be as large as 1/3 of an inch before feeding. 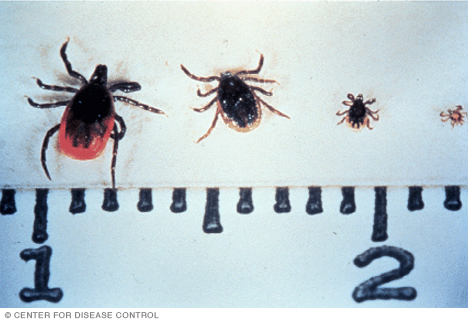 The deer tick (Ixodes scapularis) goes through three life stages. Shown from left to right is the adult female, adult male, nymph and larva on a centimeter scale.

Ticks live near the ground in wooded or brushy areas. They do not fly or jump, so they can only reach a host who brushes up against them. Factors that increase your risk of a tick bite include:

Without prompt treatment, ehrlichiosis and anaplasmosis can have serious effects on an otherwise healthy adult or child. People with weakened immune systems are at a higher risk of more-serious and life-threatening complications.

Complications of an untreated infection may include:

The best way to steer clear of ehrlichiosis or anaplasmosis is to avoid tick bites when you are outdoors. Most ticks attach themselves to your lower legs and feet as you walk or work in grassy, wooded areas or overgrown fields. After a tick attaches to your body, it usually crawls upward to find a location to burrow into your skin.

If you are going to be working or playing in an area that is a likely tick habitat, follow these tips to protect yourself.

Tick-borne infections are difficult to diagnose based solely on signs and symptoms because they are similar to many other common conditions. Therefore, a history of a known tick bite or possible exposure to ticks is an important piece of information in making a diagnosis. Your doctor will also conduct a physical exam and order tests.

If you have ehrlichiosis or anaplasmosis, the following results are likely found from blood tests:

Tests of your blood may also indicate a tick-borne infection by detecting one of the following:

If your doctor diagnoses ehrlichiosis or anaplasmosis — or suspects a diagnosis based on the symptoms and clinical findings — you'll begin treatment with the antibiotic doxycycline (Doryx, Vibramycin, others).

You'll take the drugs at least three days after you no longer have a fever and your doctor has observed improvement in other signs of disease. The minimum treatment is five to seven days. More serious illness may require two to three weeks of antibiotic treatment.

If you're pregnant or allergic to doxycycline, your doctor may prescribe the antibiotic rifampin (Rifadin, Rimactane, others).

If you find a tick on your body, don't be alarmed. Removing a tick promptly is a good defense against transmission of bacteria. Use the following steps:

A small, red bump, similar to the bump of a mosquito bite, often appears at the site of a tick bite or tick removal and resolves over a few days. This is normal and should not cause alarm.

If you experience continued irritation at the site or experience any signs or symptoms that may indicate a tick-borne infection, contact your doctor.

You're likely to first see your primary care doctor or possibly an emergency room doctor, depending on the severity of your signs and symptoms. However, you may be referred to a doctor who specializes in infectious diseases.

If a tick-borne illness is possible because of recent outdoor activities, be prepared to address the following:

Be prepared to answer these additional questions and write down the answers before your appointment.