This page contains information on Pirsue Sterile Solution for veterinary use.
The information provided typically includes the following:

For Intramammary Infusion in Lactating Cows Only

Pirsue Sterile Solution Indications For Use

Infuse one (1) syringe into each affected quarter. Use proper teat end preparation and sanitation and proper intramammary infusion technique (see ADMINISTRATION). Repeat treatment after 24 hours. Daily treatment may be repeated at 24-hour intervals for up to 8 consecutive days.

Teat End Preparation: Wash teats thoroughly with water containing a suitable dairy antiseptic. Dry the teats thoroughly. Milk out the udder completely. Using the alcohol pad provided, wipe the teat end of the affected quarters, using a separate pad for each teat. Allow sufficient time (at least 5 to 10 seconds) for the alcohol to dry. Use of protective gloves by persons applying treatment is recommended as part of aseptic infusion technique.

Important Considerations for Extended Therapy: For extended duration of therapy, infuse only quarters known to be infected with label pathogens. Do not concurrently infuse uninfected low SCC quarters of the same cow. Prepare the teats using the above instructions, and then infuse PIRSUE Sterile Solution using aseptic infusion technique and partial insertion (see diagram below).

Infusion: The Plastet disposable syringe is designed to provide the choice of either insertion of the full cannula as has traditionally been practiced, or insertion of no more than 1/8 inch of the cannula, as reported by Eberhart, R.J., et. al., 1987. Current Concepts of Bovine Mastitis, 3rd Edition, National Mastitis Council, Arlington, VA.

a. Full insertion: Remove the white end cap by pulling straight up as shown. Gently insert the full cannula into the teat canal.

b. Partial insertion: Remove the white end cap by pulling straight up as shown. Gently insert the exposed white tip into the teat canal. 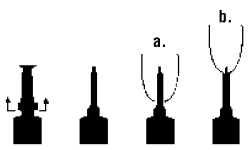 Choose the desired insertion length (full or partial) and gently insert the tip into the teat canal. Carefully push the plunger to infuse the entire contents, and then massage the quarter to distribute the solution into the milk cistern. Following infusion, dip all quarters with an antiseptic teat dip. Cows with systemic clinical signs caused by mastitis should receive other appropriate therapy under the direction of a licensed veterinarian.

Reinfection: After treatment, reinfection may occur unless good herd management, sanitation, and mechanical safety measures are practiced. Affected cows should be watched carefully to detect recurrence and possible spread of infection to other animals.

Repeated infusion during extended duration therapy regimens, even with adequate teat end preparation and sanitation, can result in elevated somatic cell counts and/or clinical mastitis, which can result in animal death. If acute clinical mastitis or other clinical signs of illness develop during extended duration therapy with PIRSUE, discontinue therapy immediately and contact your veterinarian.

Discard Empty Container; DO NOT REUSE

When using extended duration therapy with PIRSUE Sterile Solution, failure to thoroughly clean quarters and to use aseptic infusion technique can result in the infusion of environmental mastitis pathogens not sensitive to pirlimycin.

As demonstrated in the pivotal target animal safety study, even with adequate pre-treatment preparation, repeated infusion of PIRSUE Sterile Solution resulted in elevated SCC and clinical mastitis due to infection with Gram-negative environmental pathogens. For additional information about adverse drug experience reporting for animal drugs, contact FDA at 1-888-FDA-VETS or online at www.fda.gov/reportanimalae. For technical assistance, to report suspected adverse reactions, or to request a Safety Data Sheet (SDS), call 1-888-963-8471.

Pirlimycin is a lincosaminide antibiotic that has activity against Gram-positive mastitis pathogens. Pirlimycin functions by binding to the 50S ribosomal subunit of bacterial ribonucleic acid, which interferes with protein synthesis within the bacteria. In vitro activity of pirlimycin has been demonstrated against Staphylococcus aureus, Streptococcus agalactiae, Streptococcus dysgalactiae, and Streptococcus uberis, four pathogens associated with clinical and subclinical mastitis in lactating dairy cattle.

* These interpretive criteria are only intended for use when CLSI M31-A2 performance standards are used to determine antimicrobial susceptibility.

The effectiveness of pirlimycin was demonstrated in a field dose response study in lactating dairy cattle with clinical mastitis. Three investigators enrolled 486 cows from 39 herds. Cows with abnormal milk (clots, flakes) and with or without udder clinical signs (swelling, redness, or soreness) were enrolled and treated, regardless of the mastitis pathogen isolated or the pre-treatment somatic cell count. Cows were treated in the affected quarter(s) with 50, 100, or 200 mg of pirlimycin twice at a 24-hour interval. A non-treated control group was included. In this study, an individual quarter was cured if it had normal milk, no udder clinical signs, and if the milk was negative for any mastitis pathogen at 10 days post-treatment. If no bacteria were isolated pre-treatment, a decrease in somatic cell count was required. A cow was cured if all enrolled quarters in that cow were cured. All three treatment levels had significantly greater cow cure rates than the non-treated control group. Based on this study, the dose of 50 mg of pirlimycin per quarter administered twice at a 24-hour interval was determined to be the effective dose for the treatment of clinical mastitis.

Two pivotal studies addressing the safety of pirlimycin administered at dosages of 50 mg or 200 mg (4X) into all four quarters twice at a 24-hour interval indicate that the formulation is safe and non-irritating to the bovine udder. Safety observations were also made during the clinical effectiveness study. No udder irritation was noted due to intramammary infusion with pirlimycin during these studies.

An additional study was conducted to determine the safety of extended duration therapy. Twenty lactating Holstein cows, first lactation or greater, at various milk production levels, and with no evidence of clinical mastitis were enrolled and treated with pirlimycin administered at a dosage of 50 mg/quarter in all four quarters daily for eight consecutive days. Cows were monitored for general health, changes in milk production and quality, and signs of udder irritation for a total of 14 days, beginning three days prior to the first treatment. Milk production was not affected by treatment. SCCs of treated cows were statistically significantly increased post-treatment relative to the pre-treatment level. A total of 24 pirlimycin-treated quarters (32%) in 15 cows had increased SCCs (>200,000 cells/mL) for at least two consecutive milkings. Of these, six treated cows (8 quarters) had a concurrent bacterial infection attributable to a mastitis pathogen. Udder irritation occurred in seven pirlimycin-treated cows (10 quarters). Abnormal strip cup scores occurred in six pirlimycin-treated cows (9 quarters). Most of the abnormal udder and strip cup observations were seen in quarters where bacteria were also isolated.

Corroborative data from field studies and field use reports indicate that although intramammary infusion of pirlimycin hydrochloride at 50 mg/quarter administered from two to eight consecutive days was well tolerated, repeated infusion with pirlimycin increases the potential for intramammary infections and subsequent clinical mastitis due to environmental bacteria, including coliform bacteria. Adverse reactions, including clinical signs of mastitis (udder swelling and abnormal milk), increased SCCs, and death from coliform mastitis have been reported in cows following extended therapy with pirlimycin. Some, but not all, adverse reactions were associated with failure to thoroughly clean quarters and to use aseptic infusion technique.

Store Plastets in Carton or Pail Until Used.