Note: This “Introduction and Test Instructions” contains information for:

The BreathTek™ UBT Collection Kit is intended for use in the qualitative detection of urease associated with Helicobacter pylori in the human stomach and as an aid in the initial diagnosis and post-treatment monitoring of Helicobacter pylori infection in adult patients. The test may be used for monitoring treatment if used at least four (4) weeks following completion of therapy. For these purposes, the system utilizes an Infrared Spectrophotometer for the measurement of the ratio of 13CO2 to 12CO2 in breath samples.

For administration by health care professionals. To be administered under a physician’s supervision.

Since the isolation of the spiral urease-producing Helicobacter pylori bacteria (H. pylori) in 1983 by Drs. Marshall and Warren1, a significant body of evidence has accumulated indicating that the bacteria is an important pathogen in the upper GI tract of humans.2.3 The causal relationship between H. pylori and chronic active gastritis, duodenal ulcer, and gastric ulcer is well documented.4.5 Methods available for detecting current infection of the human stomach by H. pylori are generally divided into two (2) general types: Invasive and Non-invasive.

Invasive methods are so named because they include, as a first step, an esophagogastroduodenoscopy (“EGD”) with collection of gastric biopsies. These biopsies are then examined by one or more detection methods: histological examination of stained tissue, microbiological culture of the organism, or direct detection of urease activity in the tissue (for example, the CLOtest®). Biopsy based methods are expensive, entail some patient risk and discomfort and may give false negative results due to sampling errors when colonization of the gastric mucosa is patchy.6

The non-invasive, non-radioactive method for detecting current H. pylori infection is based on the BreathTek™ UBT which is described in the next section. Several serological tests that detect serum antibodies to H. pylori are commercially available. A positive result with these tests cannot distinguish between current infection and past exposure to infection and, therefore, is not a conclusive indicator of current gastrointestinal colonization by H. pylori.

III. Principle of the BreathTek™ UBT for H. pylori

The BreathTek™ UBT Collection Kit should be stored at 15°-30°C (59°-86°F). Pranactin®-Citric has an expiration date. Do not use beyond the expiration date stated on the label.

Time intervals listed in the following step-by-step procedure are critical. They are highlighted by the timer icon:

Complete operating information, including self-diagnostic instrument routines and user maintenance procedures, is provided in the Instruction Manuals for the UBiT®-IR300 Spectrophotometer, the UBiT®-AS10 Autosampler and the POCone™ Spectrophotometer, respectively. Additionally, each office laboratory or test facility should follow its own internal procedures for quality control.

X. Limitations of the Test

Values for the Meretek UBT® Breath Test were determined in a controlled clinical study of sixty-six (66) infected and fifty-three (53) uninfected asymptomatic, apparently healthy volunteers. Histological examination of biopsy tissue was used as the reference method in the determination of infection in this study. The range of Meretek UBT® Delta Over Baseline values for the uninfected group was determined to be 0.0 to 2.2. A histogram for the distribution of Delta Over Baseline values from the uninfected subjects is shown in Figure 2b.

XIV. Name and Place of Business

Directions For Use:
The PranactinR-Citric in this container
is intended for use only as a
componet of a BreathTekTM UBT for
H. pylori. See package insert for
instructions on how to prepare the
solution and directions for use.

For in vitro diagnostic use only.
The PranactinR-Citric drug is
taken orally as part of the
BreathTekTM UBT for H. pylori. 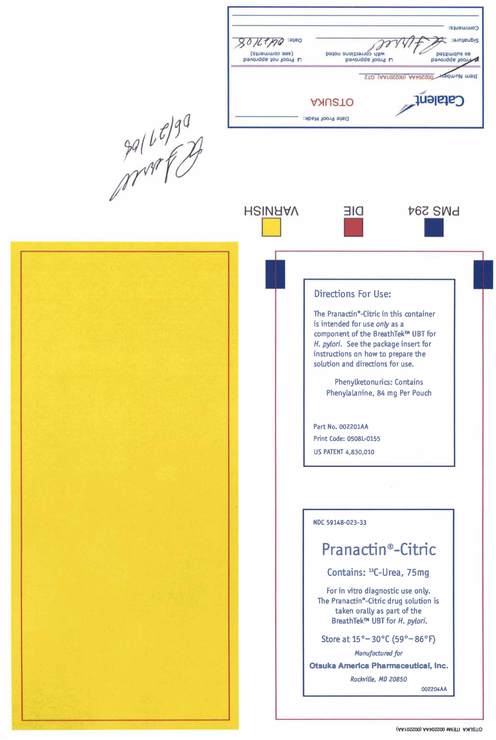