Package insert / prescribing information
Dosage form: FOR ANIMAL USE ONLY

Consult your veterinarian for assistance in the diagnosis, treatment, and control of parasitism.

Ivermectin is an injectable parasiticide for cattle and swine. One low-volume dose effectively treats and controls the following internal and external parasites that may impair the health of cattle and swine: gastrointestinal roundworms (including inhibited Ostertagia ostertagi in cattle), lungworms, grubs, sucking lice, and mange mites of cattle; and gastrointestinal roundworms, lungworms, lice, and mange mites in swine.

Ivermectin is a member of the macrocyclic lactone class of endectocides which have a unique mode of action. Compounds of the class bind selectively and with high affinity to glutamate-gated chloride ion channels which occur in invertebrate nerve and muscle cells. This leads to an increase in the permeability of the cell membrane to chloride ions with hyperpolarization of the nerve or muscle cell, resulting in paralysis and death of the parasite. Compounds of this class may also interact with other ligand-gated chloride channels, such as those gated by the neurotransmitter gamma-aminobutyric acid (GABA)

Swine: Ivermectin Injection is indicated for the effective treatment and control of the following harmful species of gastrointestinal roundworms, lungworms, lice and mange mites in swine:

Cattle: IVERMECTIN should be given only by subcutaneous injection under the loose skin in front of or behind the shoulder at the recommended dose level of 200 mcg ivermectin per kilogram of body weight. Each mL of IVERMECTIN contains 10 mg of ivermectin, sufficient to treat 110 lb (50 kg) of body weight (maximum 10 mL per injection site.). 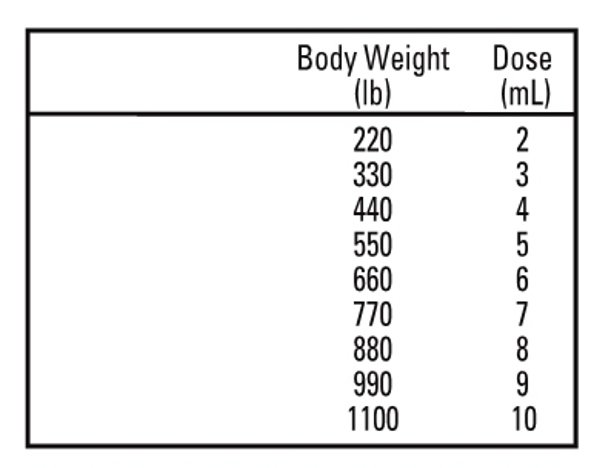 Swine: IVERMECTIN should be given only by subcutaneous injection in the neck of swine at the recommended dose level of 300 mcg ivermectin per kilogram (2.2 lb) of body weight. Each mL of IVERMECTIN contains 10 mg of ivermectin, sufficient to treat 75 lb of body weight. 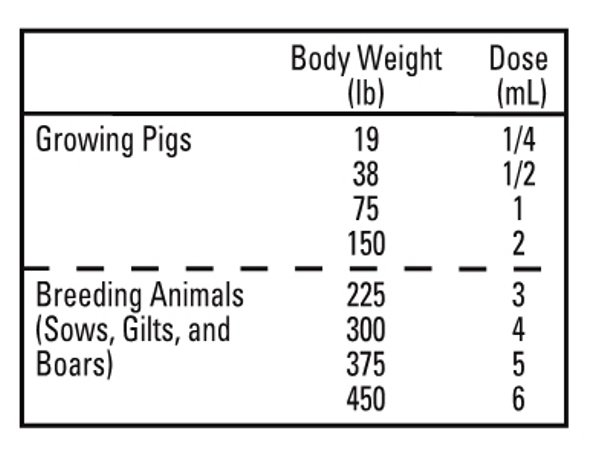 Cattle: Ivermectin Injection is to be given subcutaneously only, to reduce risk of potentially fatal clostridial infection of the injection site.
Animals should be appropriately restrained to achieve the proper route of administration. Use of a 16-gauge, 1/2 to 3/4" needle is suggested. Inject under the loose skin in front of or behind the shoulder (see illustration). When using the 200 mL, 500 mL size, use only automatic syringe equipment. Use sterile equipment and sanitize the injection site by applying a suitable disinfectant. Clean, properly disinfected needles should be used to reduce the potential for injection site infections. No special handling or protective clothing is necessary. 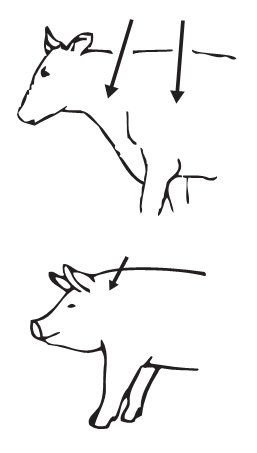 Swine: Ivermectin Injection is to be given subcutaneously in the neck. Animals should be appropriately restrained to achieve the proper route of administration. Use of a 16- or 18-gauge needle is suggested for sows and boars, while an 18- or 20-gauge needle may be appropriate for young animals. Inject under the skin, immediately behind the ear (see illustration). When using the 200 mL, 500 mL size, use only automatic syringe equipment. As with any injection, sterile equipment should be used. The injection site should be cleaned and disinfected with alcohol before injection. The rubber stopper should also be disinfected with alcohol to prevent contamination of the contents. Mild and transient pain reactions may be seen in some swine following subcutaneous administration.


SWINE: At the time of initiating any parasite control program, it is important to treat all breeding animals in the herd. After the initial treatment, use Ivermectin Injection regularly as follows:

FEEDER PIGS
(Weaners/Growers/Finishers)
All weaner/feeder pigs should be treated before placement in clean quarters.
Pigs exposed to contaminated soil or pasture may need retreatment if reinfections occurs.

NOTE:
(1) Ivermectin Injection has a persistent drug level sufficient to control mite infestations throughout the egg to adult life cycle. However, since the ivermectin effect is not immediate, care must be taken to prevent reinfestation from exposure to untreated animals or contaminated facilities. Generally, pigs should not be moved to clean quarters or exposed to uninfested pigs for approximately one week after treatment. Sows should be treated at least one week before farrowing to minimize transfer of mites to newborn baby pigs.
(2) Louse eggs are unaffected by Ivermectin Injection and may require up to three weeks to hatch. Louse infestations developing from hatching eggs may require retreatment.
(3) Consult a veterinarian for aid in the diagnosis and control of internal and external parasites of swine.

Reindeer: For the treatment and control of warbles (Oedemagena tarandi) in reindeer, inject 200 micrograms ivermectin per kilogram of body weight, subcutaneously. Follow use directions for cattle as described under ADMINISTRATION.

American Bison: For the treatment and control of grubs (Hypoderma bovis) in American bison, inject 200 micrograms ivermectin per kilogram of body weight, subcutaneously. Follow use directions for cattle as described under ADMINISTRATION.

RESIDUE WARNING: Do not treat reindeer or American bison within 8 weeks (56 days) of slaughter.

Not for use in humans.

Keep this and all drugs out of the reach of children.

RESIDUE WARNING: Do not treat cattle within 35 days of slaughter. Because a withdrawal time in milk has not been established, do not use in female dairy cattle of breeding age.
A withdrawal period has not been established for this product in pre-ruminating calves. Do not use in calves to be processed for veal.
Do not treat swine within 18 days of slaughter.

Use sterile equipment and sanitize the injection site by applying a suitable disinfectant. Clean, properly disinfected needles should be used to reduce the potential for injection site infection.

Observe cattle for injection site reactions. Reactions may be due to clostridial infection and should be aggressively treated with appropriate antibiotics. If injection site infections are suspected, consult your veterinarian.

This product is not for intravenous or intramuscular use.

Ivermectin Injection for Cattle and Swine has been developed specifically for use in cattle, swine, reindeer and American bison only. This product should not be used in other animal species as severe adverse reactions, including fatalities in dogs may result.

When to Treat Cattle with Grubs
IVERMECTIN effectively controls all stages of cattle grubs. However, proper timing of treatment is important. For most effective results, cattle should be treated as soon as possible after the end of the heel fly (warble fly) season. Destruction of Hypoderma larvae (cattle grubs) at the period when these grubs are in vital areas may cause undesirable host-parasite reactions including the possibility of fatalities. Killing Hypoderma lineatum when it is in the tissue surrounding the esophagus (gullet) may cause salivation and bloat.: Killing H. bovis when it is in the vertebral canal may cause staggering or paralysis. These reactions are not specific to treatment with a IVERMECTIN, but can occur with any successful treatment of grubs. Cattle should be treated either before or after these stages of grub development. Consult your veterinarian concerning the proper time for treatment. Cattle treated with IVERMECTIN after the end of the heel fly season may be retreated with IVERMECTIN during the winter for internal parasites, mange mites, or sucking lice without danger of grub-related reactions. A planned parasite control program is recommended.

Studies indicate that when ivermectin comes in contact with the soil, it readily and tightly binds to the soil and becomes inactive over time. Free ivermectin may adversely affect fish and certain water-borne organisms on which they feed. Do not permit water runoff from feedlots or production sites to enter lakes, streams, or ponds. Do not contaminate water by direct application or by the improper disposal of drug containers. Dispose of containers in an approved landfill or by incineration.
As with other avermectins, ivermectin is excreted in the dung of treated animals and can inhibit the reproduction and growth of pest and beneficial insects that use dung as a source of food and for reproduction. The magnitude and duration of such effects are species and lifestyle specific. When used according to label directions, the product is not expected to have an adverse impact on populations of dung-dependent insects.

Restricted Drug (California) - use only as directed.