For use with Haemonetics Apheresis Devices
Rx Only

I. Indications for Use

The Haemonetics 250mL Anticoagulant Citrate Phosphate Double Dextrose (CP2D) and 250mL Additive Solution Formula 3 (AS-3) nutrient solution are intended to be used only with automated apheresis devices for collecting human blood and blood components. The anticoagulant solution is metered by the apheresis machine into the collected whole blood. It is not to be infused directly into the donor. After the anticoagulant is used, the bag in which it was contained is discarded. When collecting plasma in the RBCP protocol, the plasma is collected into an empty plasma collection bag. One hundred milliliters (100ml) of AS-3 is transferred into one RBC collection bag when using the RBCP protocol or 2 separate bags when using the 2RBC protocol. AS-3 solution provides nutrients to keep the red blood cells viable for 42 days when refrigerated.

CP2D is also indicated for the collection of FFP and PF24 plasma, collected and stored plasma collected using the 822, 822-2P and 822F-2P disposable sets may be frozen within 8 hours (FFP) or within 24 hours which includes 8 hours room temperature storage and 16 hours refrigeration storage (PF24).

Neither the CP2D nor the AS-3 container is used for the storage of blood or blood components.

The container for all CP2D and AS-3 solutions is a flexible polyvinyl chloride (PVC) bag sized for holding the appropriate amount of solution. The bag has a single port that is used for bag filling. The port is sealed after filling with a male luer assembly (CP2D) or female luer assembly (AS-3). Both the male and female luers are gamma irradiated prior to use. The plastic bag is contained in an overwrap which is added prior to sterilization.

The formulations for these products are as follows:

CP2D Anticoagulant Solution and AS-3 Solution may be used with Haemonetics apheresis devices. See the Haemonetics Operation Manual for full operating instructions.

Studies of the effectiveness of 250mL CP2D and 250mL AS-3 made by Haemonetics Corporation Union, South Carolina facility included in vivo survival data in healthy subjects at one test site and in vitro characterization of stored red blood cells at three test sites.

In vitro tests of red blood cell functional and physical integrity were conducted at Days 0 and 42 of storage. All plasma units from the RBCP and manual procedures were evaluated on Day 0 for in vitro product characteristics. Group t-tests (two tailed) were performed to examine any statistically significant differences between the properties of apheresis and manual RBCs. Statistically significant differences
(p<n; 0.05) were evaluated in terms of clinical significance. Differences in glucose or lactate levels, hematocrit, pH, and supernatant potassium were not considered clinically relevant because these parameters have not been found to correlate significantly with the in vivo 24 hour percent recovery.

The results from this study confirmed the observations from Clinical Evaluation #95012. The quality of stored RBC products collected by apheresis is similar to RBC products collected manually. A difference in ATP and hemolysis levels, both after processing and on day 42 of storage, for the apheresis units were not statistically significant when compared to ATP and hemolysis levels from manually collected RBCs and were similar to historical reference values.

AS-3 300mL was used in conjunction with an automated closed system, the Haemonetics Model 215 (now called the ACP) in Clinical Evaluation #97002. Five test sites were used in this study. 100 samples were tested in vitro and 30 in vivo. Red blood cells derived from CPDA-1 whole blood units were used. AS-1 red blood cells were used as a control. A total of 140 red blood cell units were glycerolized and deglycerolized. The in vitro RBC quality and in vivo RBC viability data obtained on these units demonstrate that red cell units glycerolized and deglycerolized using the Model 215 System and resuspended in 300mL AS-3 solution manufactured by Haemonetics, Union, South Carolina are processed in a closed system and can be stored for 15 days at 4°C.

Clinical report TR-CLN-100229-B summarizes a study conducted to support the use of CP2D for the collection of FFP and PF24 (plasma collected and stored Plasma collected using the 822, 822-2P and 822F-2P disposable sets may be frozen within 8 hours (FFP) or within 24 hours which includes 8 hours room temperature storage and 16 hours refrigeration storage (PF24). The following tables provide a summary of the results of this evaluation.

Note: Table 1, Table 2, and Table 3 below demonstrate the results of a clinical study conducted for various coagulation factors on plasma that was frozen within 8 hours (FPP) versus plasma frozen within 24 hours, which includes 8 hours room temperature storage and 16 hours refrigeration storage (PF24).

As noted in Table 1 below, significant differences were observed between PF24 and FFP for assays Prothrombin Time, Partial Thromboplastin Time, FVIIa, and FVIII.

Table 2 provides the results for Plasma Sample A and Plasma Sample B, which were outliers and subsequently excluded from the analysis.

Table 3 provides a summary of how many samples tested in each group differed by >20% when FFP and PF24 were compared.

One sample (Plasma Sample A) showed significantly increased levels for Factor VIIa and F1.2. Another sample (Plasma Sample B) showed significantly decreased level of Factor VIII:C for the FFP sample (Table 2). These data were excluded from Table 1 since the values for VIIa and F1.2 were more than 4 SD from the mean. The factor VIII:C was not more than 4 SD from the mean but was significantly lower in FFP as compared to PF24. While other parameters in this sample did not show significant differences when compared to the control FFP, the FDA could not exclude the possibility that the activation found in the PF24 sample was related to the preparation procedure. The rate of such event occurrence was unknown and, based on review of published values for PF24 products, is most likely very rare. The clinical significance of the elevated markers of clotting activation for transfusion recipients is undetermined.

Note: Plasma collected may be labeled as FFP or Plasma Frozen within 24 Hours (PF24).

• Solutions are NOT INTENDED FOR DIRECT INFUSION.
• Do not use if particulate matter is present or if the solution is cloudy.
Note: Some opacity of the plastic container due to moisture absorbance by the PVC during the sterilization process may be observed. This is normal and does not affect the quality or the safety of the product. This white, hazy appearance will diminish gradually over time. This advice only applies to the plastic container. Do not use if the solution itself is cloudy or contains particulate matter.
• Do not use if the container is damaged, leaking or if there is any visible sign of deterioration.
Note: The over wrap serves as a moisture barrier. Upon removing the solution bag, small droplets of condensation may be present in the packaging. This is considered normal. After removing the over wrap gently squeeze the inner bag which protects the sterility of the solution. Discard if any leaks are observed or if an excessive amount of solution is noted within the over wrap.
• Do not reuse solution. Discard any unused or partially used solutions.
• Protect from sharp objects.
• Verify that solutions have been appropriately connected to avoid leaks.
• The set should be loaded and primed for use within 8 hours of the start of the collection.
• Carry out the apheresis procedure in accordance with the detailed instructions of the manufacturer of the apheresis device.

Both solutions are intended to be used only with automated apheresis devices for collecting human blood and blood components. CP2D is used as an anticoagulant solution and AS-3 is intended for use a nutrient solution. Neither solution is intended for direct infusion. 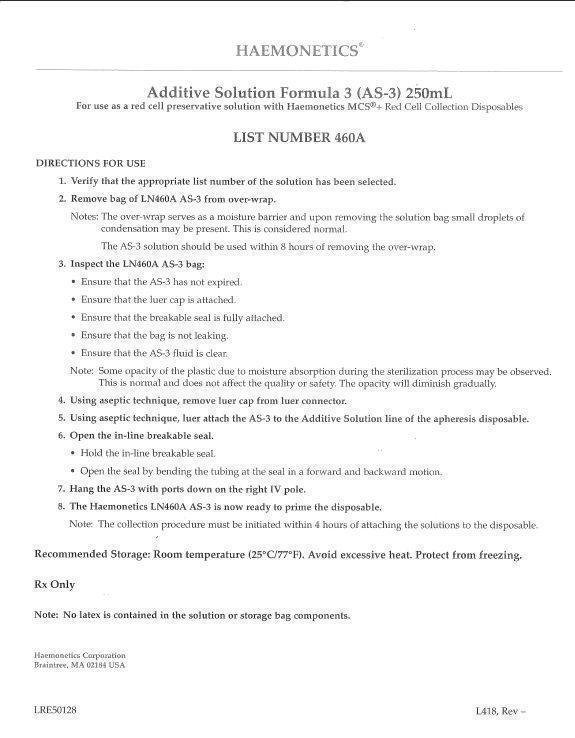 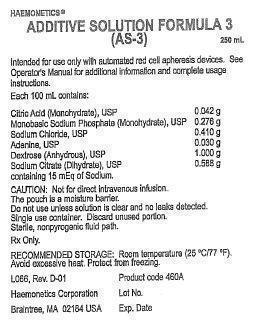