Indications and Usage for GA-68-DOTATOC

Ga 68 DOTATOC Injection is indicated for use with positron emission tomography (PET) for the localization of somatostatin receptor positive neuroendocrine tumors (NETs) in adult and pediatric patients.

Radiopharmaceuticals should be used by or under the control of physicians who are qualified by specific training and experience in the safe use and handling of radionuclides, and whose experience and training have been approved by the appropriate governmental agency authorized to license the use of radionuclides.

In adults, the recommended amount of radioactivity to be administered for PET imaging is 4 mCi (148 MBq) with a range of 3 mCi to 5 mCi (111 MBq to 185 MBq) administered as an intravenous injection with an injection rate of approximately 10 seconds per mL.

In pediatric patients, the recommended amount of radioactivity to be administered for PET imaging is 0.043 mCi/kg of body weight (1.59 MBq/kg) with a range of 0.3 mCi (11.1 MBq) to 3 mCi (111 MBq) as an intravenous injection with an injection rate of approximately 10 seconds per mL.

Use with Somatostatin Analogs and Patient Hydration

Instruct patients to drink water to ensure adequate hydration prior to administration of Ga 68 DOTATOC Injection and to continue to drink and void frequently during the first hours following administration to reduce radiation exposure [see Warnings and Precautions (5.1)].

The effective radiation dose resulting from the administration of 148 MBq (4 mCi) to an adult weighing 75 kg, is about 3.11 mSv. For an administered activity of 148 MBq (4 mCi) the typical radiation dose to the critical organs, which are the urinary bladder wall, the spleen and the kidneys/adrenals, are about 18 mSv, 16 mSv and 12 mSv, respectively. Because the spleen has one of the highest physiological uptakes, higher uptake and radiation dose to other organs or pathologic tissues may occur in patients with splenectomy.

A negative scan after the administration of Ga 68 DOTATOC Injection in patients who do not have a history of NET disease does not rule out disease [see Clinical Studies (14)].

The following adverse reactions occurred at a rate of < 2%:
Gastrointestinal Disorders: nausea

The following adverse reactions occurred at a rate of a < 1%
Skin and Subcutaneous Tissue Disorders: pruritus
Vascular Disorders: flushing

The following adverse reactions have been identified during postapproval use of other somatostatin receptor imaging agents. Because these reactions are reported voluntarily from a population of uncertain size, it is not always possible to reliably estimate their frequency or establish a causal relationship to the drug.

To decrease exposure to the breastfed infant, advise a lactating woman to interrupt breastfeeding and pump and discard breast milk for 8 hours after Ga 68 DOTATOC Injection administration.

Clinical studies of Ga 68 DOTATOC did not include sufficient numbers of subjects aged 65 and over to determine whether they respond differently from younger subjects. Other reported clinical experience has not identified differences in responses between the elderly and younger patients. In general, dose selection for an elderly patient should be cautious, usually starting at the low end of the dosing range, reflecting the greater frequency of decreased hepatic, renal, or cardiac function, and of concomitant disease or other drug therapy.

In the event of a radiation overdose, reduce the absorbed dose to the patient by increasing the elimination of the radionuclide from the body by reinforced hydration, frequent bladder voiding, and diuretics, if needed. If possible, perform an estimate of the radioactive dose given to the patient.

Ga 68 DOTATOC, also known as Gallium-68 (DOTA0-Phe1-Tyr3) octreotide, is a cyclic 8 amino acid peptide with a covalently bound chelator (DOTA). The peptide has the amino acid sequence: H-D-Phe-Cys-Tyr-D-Trp-Lys-Thr-Cys-Thr-OH, and contains one disulfide bond. Ga 68 DOTATOC has a molecular weight of 1489.65 g/mol and its chemical structure is shown in Figure 1. 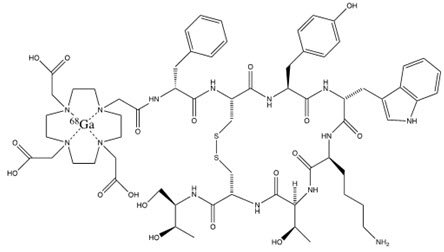 The relationship between Ga 68 DOTATOC plasma concentrations and successful imaging was not explored in clinical trials.

Ga 68 DOTATOC distributes to all sstr2-expressing organs such as pituitary, thyroid, spleen, adrenals, kidney, pancreas, prostate, liver, and salivary glands. Uptake in the lung and lymph nodes are lower as compared to other sstr-2 expressing organs.

Radiotracer elimination is exclusively via urine. Approximately 16% of the injected dose is excreted in urine in the first two to four hours post-injection.

Study A (NCT: 01619865) included 220 subjects with known or suspected SSTR positive tumors referred for diagnosis or evaluation of disease extension before or after treatment. A total of 178 of the 220 patients (81%) had a history of neoplasm at the time of Ga-68 DOTATOC imaging. In 177 of the 220 patients, sufficient data to establish NET status per composite reference was available for efficacy evaluation. Table 6 shows the performance of Ga-68 DOTATOC in the detection of NETs for Study A.

Study B (NCT: 01869725) included 62 patients with histologically positive NET or other SSTR positive tumor referred for evaluation of disease before or after treatment. In 59 of the 62 patients, sufficient data to establish NET status per composite reference was available for efficacy evaluation. The estimated positive and negative percent agreements were 92% and 75% for reader 1 and 90% and 75% for reader 2, respectively.

Receipt, transfer, handling, possession or use of this product is subject to the radioactive material regulations and licensing requirements of the U.S. Nuclear Regulatory Commission, Agreement States or Licensing States as appropriate. Store and dispose of Ga 68 DOTATOC Injection in accordance with the regulations and a general license, or its equivalent, of an Agreement State or a Licensing State.

Advise patients to drink water to ensure adequate hydration prior to their PET study and recommend they drink and urinate as often as possible during the first hours following the administration of Ga 68 DOTATOC Injection, in order to reduce radiation exposure [see Dosage and Administration (2.3) and Warnings and Precautions (5.1)].

Advise a lactating woman to interrupt breastfeeding and pump and discard breast milk for 8 hours after Ga 68 DOTATOC Injection administration in order to minimize radiation exposure to a breastfed infant [see Use in Specific Populations (8.2)].

Do not use if cloudy or if contains particulate matter.
CAUTION: RADIOACTIVE MATERIAL