Each Serving Size of 2 caplets contain: 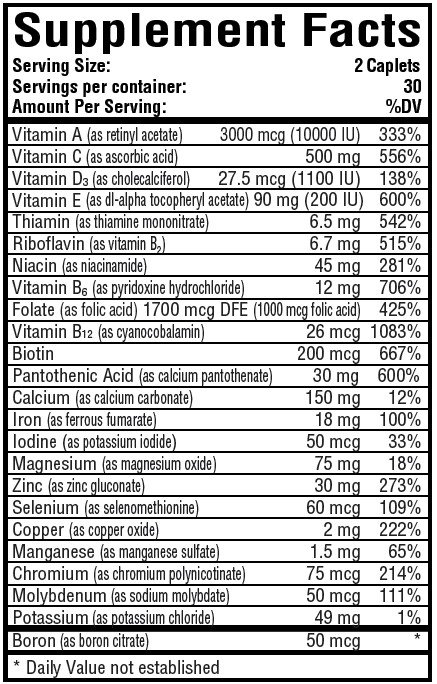 Accidental overdose of iron-containing products is a leading cause of fatal poisoning in children under 6. Keep this product out of reach of children. In case of accidental overdose, call a doctor or poison control center immediately. Administration of folic acid alone is improper therapy for pernicious anemia and other megaloblastic anemias in which vitamin B 12 is deficient.

Folic acid in doses above 0.1 mg daily may obscure pernicious anemia, in that hematologic remission can occur while neurological manifestations remain progressive.

There is a potential danger in administering folic acid to patients with undiagnosed anemia, since folic acid may obscure the diagnosis of pernicious anemia by alleviating the hematologic manifestations of the disease while allowing the neurologic complications to progress. This may result in severe nervous system damage before the correct diagnosis is made. Adequate doses of vitamin B12 may prevent, halt, or improve the neurologic changes caused by pernicious anemia.

The patient’s medical conditions and consumption of other drugs, herbs, and/or supplements should be considered.

For use on the order of a healthcare practitioner.
Call your doctor about side effects. To report side effects, call PureTek Corporation at
1-877-921-7873 or FDA at 1-800-FDA-1088 or www.fda.gov/medwatch.

Foliflex TM is not recommended for and should not be given to patients receiving levodopa because the action of levodopa is antagonized by pyridoxine. There is a possibility of increased bleeding due to pyridoxine interaction with anticoagulants (e.g., Aspirin, Heparin, or Clopidogrel).

Folic Acid: Allergic sensitizations have been reported following both oral and parenteral administration of folic acid.

Ferrous Fumarate: Gastrointestinal disturbances (anorexia, nausea, diarrhea, constipation) occur occasionally, but are usually mild and may subside with continuation of therapy. Although the absorption of iron is best when taken between meals, giving Foliflex TM after meals may control occasional gastrointestinal disturbances. Foliflex TM is best absorbed when taken at
bedtime.

Adverse reactions have been reported with specific vitamins and minerals but generally at levels substantially higher than those contained herein. However, allergic and idiosyncratic reactions are possible at lower levels. Iron, even at the usually recommended levels, has been associated with gastrointestinal intolerance in some patients.

Iron: Signs and Symptoms: Iron is toxic. Acute overdosage of iron may cause nausea and vomiting and, in severe cases, cardiovascular collapse and death. Other symptoms include pallor and cyanosis, melena, shock, drowsiness, and coma. The estimated overdose of orally ingested iron is 300 mg/kg body weight. When overdoses are ingested by children, severe reactions, including fatalities, have resulted. Foliflex TM should be stored beyond the reach of children to prevent against accidental iron poisoning. Keep this and all other drugs out of reach of children.

For specific therapy, exchange transfusion and chelating agents should be used. For general management, perform gastric lavage with sodium bicarbonate solution or milk. Administer intravenous fluids and electrolytes and use oxygen.

Adults (persons over 12 years of age) Two (2) Foliflex TM caplet daily, between meals, or as directed by a physician. Do not administer to children under the age of 12.

Do not use it if the bottle seal is broken.
KEEP THIS AND ALL MEDICATIONS OUT OF THE REACH OF CHILDREN.
Store at controlled room temperature 20° to 25°C (68° to 77°F). [See USP].
Protect from light and moisture and avoid excessive heat.
To report a serious adverse event or to obtain product information, contact
1-877-921-7873. 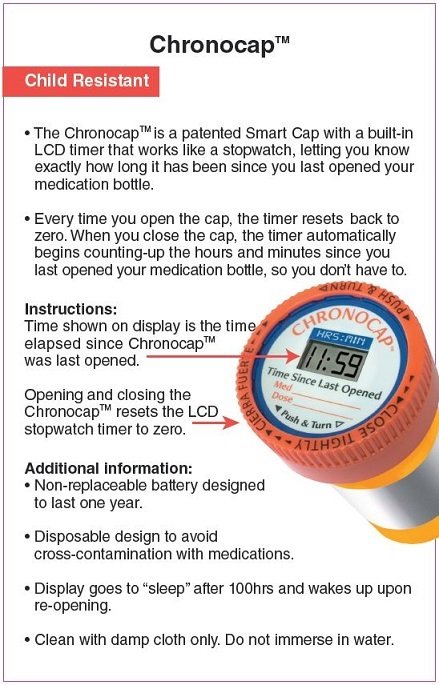 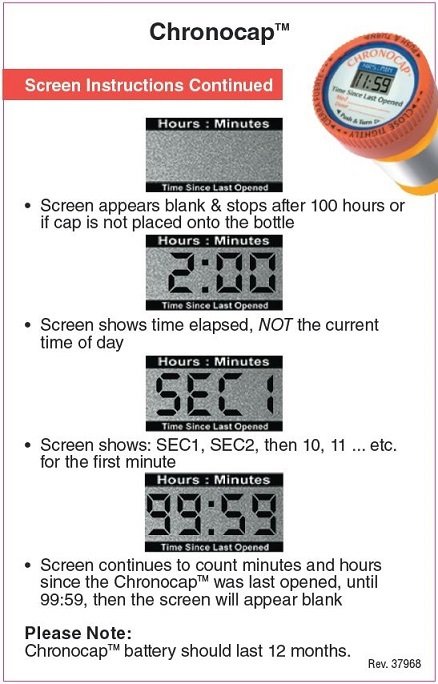