For Ototopical Use In Dogs

Caution: Federal (U.S.A.) Law restricts this drug to use by or on the order of a licensed veterinarian.

Each milliliter of Baytril® Otic contains: enrofloxacin 5 mg (0.5% w/v), silver sulfadiazine (SSD) 10 mg (1.0% w/v), benzyl alcohol (as a preservative) and cetylstearyl alcohol (as a stabilizer) in a neutral oil and purified water emulsion. The active ingredients are delivered via a physiological carrier (a nonirritating emulsion). 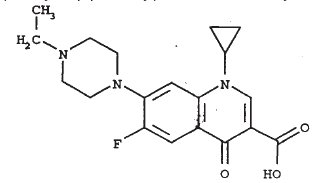 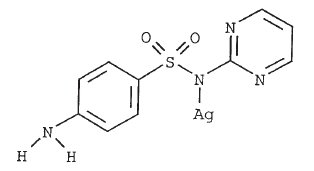 Enrofloxacin, a 4-fluoroquinolone compound, is bactericidal with activity against a broad spectrum of both Gram negative and Gram positive bacteria. Fluoroquinolones elicit their bactericidal activities through interactions with two intracellular enzymes, DNA gyrase (DNA topoisomerase II) and DNA topoisomerase IV, which are essential for bacterial DNA transcription, synthesis and replication. It is believed that fluoroquinolones actively bind with bacterial DNA:ENZYME complexes and thereby inhibit the essential processes catalyzed by the enzymes (DNA supercoiling and chromosomal decatenation).1 The ultimate outcome of the fluoroquinolone intervention is DNA fragmentation and bacterial cell death.2,3

Silver sulfadiazine (SSD) is synthesized from silver nitrate and sodium sulfadiazine.4 This compound has a wide spectrum of antimicrobial activity against Gram negative and Gram positive bacteria and is also an effective antimycotic.5,6 SSD suppresses microbial growth through inhibition of DNA replication and modification of the cell membrane.

In vitro assays, such as disk-diffusion and agar/broth-dilution, are used to determine the susceptibilities of microbes to antimicrobial therapies. Results of agar/broth-dilution assays are reported as a Minimal Inhibitory Concentration (MIC) which represents the lowest antimicrobial concentration, expressed in μg/mL, capable of inhibiting the growth of a pathogenic microorganism. MICs are used in conjunction with pharmacokinetics to predict the in vivo efficacy of systemically administered antimicrobials. Topical administration of Baytril® Otic to an exudate and debris-free canal, however, will generally result in local antimicrobial concentrations that greatly exceed serum and tissue levels resulting from systemic therapy. Therefore, when using Baytril® Otic as a treatment for canine otitis externa, interpret susceptibility data cautiously.

Baytril® Otic is indicated as a treatment for canine otitis externa complicated by bacterial and fungal organisms susceptible to enrofloxacin and/or silver sulfadiazine (see Microbiology section).

Due to its combination of active ingredients, Baytril® Otic provides antimicrobial therapy against bacteria and fungi (which includes yeast) commonly encountered in cases of canine otitis externa.

The effectiveness of Baytril® Otic was evaluated in a controlled, double-blind, multi-site clinical trial. One hundred and sixty-nine dogs (n=169), with naturally occurring active otitis externa participated in the study. The presence of active disease was verified by aural cytology, microbial culture and otoscopy/clinical scoring. Qualified cases were randomly assigned to either Baytril Otic treatment (n=113) or to a comparable placebo-based regimen (n=56).

Treatments were administered twice daily for up to 14 days. Assessment of effectiveness was based on continued resolution of clinical signs 3 to 4 days following administration of the last dose.

At study conclusion, Baytril® Otic was found to be a significantly more effective treatment for canine otitis externa than the placebo regimen. Based on the scoring system used to assess treatment response, therapeutic success occurred in 67% of Baytril® Otic-treated infections compared to 14% with placebo (r-value2 0.001) after 14 days of treatment.

Baytril® Otic is contraindicated in dogs with suspected or known hypersensitivity to quinolones and/or sulfonamides.

Not for human use. Keep out of the reach of children. Avoid contact with eyes. In case of contact, immediately flush eyes with copious amounts of water for 15 minutes. In case of dermal contact, wash skin with soap and water. Consult a physician if irritation develops or persists following ocular or dermal exposures. Individuals with a history of hypersensitivity to quinolone compounds or antibacterials should avoid handling this product. In humans, there is a risk of user photosensitization within a few hours after excessive exposure to quinolones. If excessive accidental exposure occurs, avoid direct sunlight.

Quinolone-class drugs have been associated with cartilage erosions in weightbearing joints and other forms of arthropathy in immature animals of various species.

The safe use of Baytril® Otic in dogs used for breeding purposes, during pregnancy, or in lactating bitches, has not been evaluated.

During clinical trials, 2 of 113 (1.7%) dogs exhibited reactions that may have resulted from treatment with Baytril® Otic.

Both cases displayed local hypersensitivity responses of the aural epithelium to some component within the Baytril® Otic formulation. The reactions were characterized by acute inflammation of the ear canal and pinna.

In a target animal safety study, Baytril® Otic was administered in both ears of 24 clinically normal beagle dogs at either recommended or exaggerated dosages: 10, 30 or 50 drops applied twice daily for 42 consecutive days. A control group of 8 beagle dogs was treated by administering 50 drops of vehicle in one ear twice daily for 42 consecutive days, with the contralateral ear untreated. Erythema was noted in all groups, including both treated and untreated ears in the controls, which resolved following termination of treatment.

In order to test safety in case of ingestion, Baytril® Otic was administered, twice daily for 14 consecutive days, to the dorsum of the tongue and to the left buccal mucosa of 6 clinically normal dogs. No adverse local or systemic reactions were reported.

Shake well before each use.

Tilt head so that the affected ear is presented in an upward orientation. Administer a sufficient quantity of Baytril® Otic to coat the aural lesions and the external auditory canal. As a general guide, administer 5-10 drops per treatment in dogs weighing 35 lbs. or less and 10-15 drops per treatment in dogs weighing more than 35 lbs. Following treatment, gently massage the ear so as to ensure complete and uniform distribution of the medication throughout the external ear canal. Apply twice daily for a duration of up to 14 days.

Bayer (reg'd), the Bayer Cross (reg'd), Baytril® and the dog design are trademarks of Bayer.

For Ototopical Use in Dogs

CAUTION: Federal (U.S.A.) law restricts this drug to use by or on the order of a licensed veterinarian. 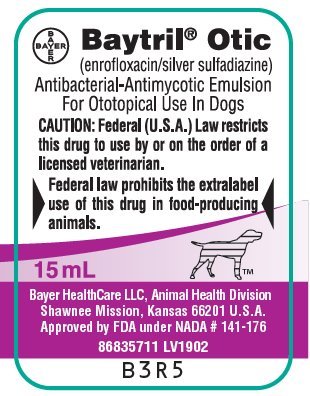 For Ototopical Use in Dogs

CAUTION: Federal (U.S.A.) Law restricts this drug to use by or on the order of a licensed veterinarian.