Federal (USA) law restricts this drug to use by or on the order of a licensed veterinarian. Keep this and all drugs out of reach of children.

Atopica (cyclosporine capsules) USP MODIFIED is an oral form of cyclosporine that immediately forms a microemulsion in an aqueous environment. Cyclosporine, the active ingredient in Atopica, is a cyclic polypeptide, immune modulating agent consisting of 11 amino acids. It is produced as a metabolite by the fungal species Beauveria nivea. 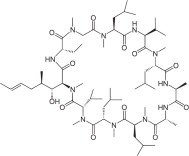 Atopica is indicated for the control of atopic dermatitis in dogs weighing at least 4 lbs. (1.8 kg) body weight.

The initial dose of Atopica is 5 mg/kg/day (3.3-6.7 mg/kg/day) as a single daily dose for 30 days. Following this initial daily treatment period, the dose of Atopica may be tapered by decreasing the frequency of dosing to every other day or twice weekly, until a minimum frequency is reached which will maintain the desired therapeutic effect. Atopica should be given at least one hour before or two hours after a meal. If a dose is missed, the next dose should be administered (without doubling) as soon as possible, but dosing should be no more frequent than once daily.

Atopica (cyclosporine) is a systemic immunosuppressant that may increase the susceptibility to infection and the development of neoplasia.

Not for human use. Keep this and all drugs out of reach of children.

For use only in dogs.

Capsules should not be broken or opened. Wear gloves during administration.

Wash hands after administration. In case of accidental ingestion, seek medical advice immediately and provide the package insert or the label to the physician.

The safety and effectiveness of Atopica has not been established in dogs less than 6 months of age or less than 4 lbs body weight. Atopica is not for use in breeding dogs, pregnant or lactating bitches.

As with any immunomodulation regimen, exacerbation of sub-clinical neoplastic and infectious conditions may occur.

Atopica may cause elevated levels of serum glucose, and should be used with caution in cases with diabetes mellitus. If signs of diabetes mellitus develop following the use of Atopica, consideration should be given to tapering or discontinuing the dose.

Since the effect of cyclosporine use on dogs with compromised renal function has not been studied, Atopica should be used with caution in dogs with renal insufficiency.

Killed vaccines are recommended for dogs receiving Atopica because the impact of cyclosporine on the immune response to modified live vaccines is unknown (See Animal Safety).

A total of 265 dogs were included in the field study safety analysis. One hundred and eleven (111) dogs were treated with placebo for the first 30 days. For the remainder of the study, all dogs received Atopica capsules.

Persistent otitis externa, urinary tract infections, anorexia, gingival hyperplasia, lymphadenopathy and lethargy were the next most frequent adverse events observed. Gingival hyperplasia regressed with dose tapering. Owners of four dogs reported seizures while dogs were receiving Atopica. In one dog, seizures were the result of a brain tumor diagnosed one month into the study. Another dog experienced seizures before and after the study.

Otitis externa, allergic otitis, or pinna erythema, with or without exudates, commonly accompanies atopy. Many dogs entered the study with otitis externa, which did not resolve without otic treatment. New cases of otitis externa, allergic otitis, or pinna erythema developed while dogs were receiving Atopica. However, the incidence rate was lower with Atopica compared to placebo. A change in the dose frequency was not necessary when new cases occurred.

Clinical Pathology Changes: During the study, some dogs experienced changes in clinical chemistry parameters while receiving Atopica, as described in the following table:

Neoplasms have been reported in dogs taking Atopica, including reports of lymphoma/lymphosarcoma and mast cell tumor. It is unknown if these were preexisting or developed de novo while on Atopica.

Cyclosporine is an immunosuppressive agent that has been shown to work via suppression of T-helper and T-suppressor cells and inhibition of interleukin-2.

It does not depress hematopoesis or the function of phagocytic cells.

A decrease in CD4 and CD8 cells was not seen in dogs receiving 20 mg/kg/day of cyclosporine for 56 days. Atopica is not a corticosteroid or an antihistamine.

Cyclosporine is extensively metabolized by the cytochrome P-450 enzyme system in the liver, and to a lesser degree in the gastrointestinal tract and the kidney. The metabolism of cyclosporine can be altered by the co-administration of a variety of agents (See Precautions).

Dogs were treated with Atopica capsules for a total of 4 months. No additional therapy with antihistamines, corticosteroids or medicated shampoos was permitted.

Evaluations for pruritus and for skin lesions to derive a Canine Atopic Dermatitis Extent and Severity Index (CADESI) score occurred at enrollment and at monthly intervals. One hundred ninety-two (192) dogs were included in the statistical analysis of effectiveness.

At the end of the 30 day placebo controlled period, CADESI scores of dogs treated with Atopica capsules improved by 45% from enrollment, while CADESI scores of dogs treated with placebo worsened by 9%. Seventy-four percent (74%) of Atopica treated dogs showed improvement in their pruritus scores over the first 30 day period, while only 24% of the placebo treated dogs showed an improvement. Owner and Veterinary Global Assessment in response to treatment also demonstrated statistically significant (p<0.0001) improvement. After 4 weeks of therapy, Owner and Veterinary Global Assessments showed approximately twice as much improvement in the Atopica treated dogs as compared to placebo treated dogs.

In a 52-week oral study with dose levels of 0, 1, 3, and 9 times the target initial daily dose, emesis, diarrhea and weight loss were seen in all cyclosporine treated groups with increasing frequency as the dose increased.

When administered at higher than the maximum recommended dose, raised skin lesions, papilloma-like areas on the integument, popliteal lymph node enlargement, and weight loss were also seen. There were no Atopica related changes in urinalysis, ECG, blood pressure, or ophthalmologic exams.

Gross necropsy revealed epithelial changes consistent with those seen on physical examination. Proliferation of gingiva and toe pad epithelium was seen in all Atopica dosed groups, and was seen in a dose dependent fashion. The degree of the proliferation was greater in dogs in the non-tapered groups as compared to the tapered groups. Similar changes were noted on histopathologic examination of the cutaneous changes seen on physical examination. These lesions were characterized by epidermal hyperplasia, chronic dermatitis and hyperkeratosis.

Vaccination effect: The effect of Atopica administration on the immunological response to vaccination was evaluated in a study in which 16 dogs were dosed with either Atopica at 20 mg/kg/day (4X the initial daily dose) or placebo for 56 days. All dogs were vaccinated on Day 27 with a killed commercial rabies virus and a multivalent vaccine (DHLPP) which included a modified live virus. Antibody titers for rabies, canine distemper, canine adenovirus type 2, parainfluenza, parvovirus, Leptospira canicola, and Leptospira icterohaemmorrhagiae were examined on Days 0, 27 (prior to vaccination), 42 and 56. Quantification of CD4, CD8, and CD3 T-lymphocytes was analyzed.

Clinical changes included soft stool and dermatologic changes consistent with those seen in previous studies. Antibody titers did not rise in dogs treated with Atopica or the placebo for any component of the multivalent vaccine which included a modified live virus while all animals demonstrated a significant increase in antibody rabies titer by Day 42 or 15 days post-revaccination. No effect was seen on T-lymphocytes.

Atopica should be stored and dispensed in the original unit-dose container at controlled room temperature between 59° and 77°F (15-25°C).

Manufactured for: Elanco US Inc.
Greenfield, IN 46140, USA

Atopica, Elanco and the diagonal bar logo are trademarks of Elanco or its affiliates. 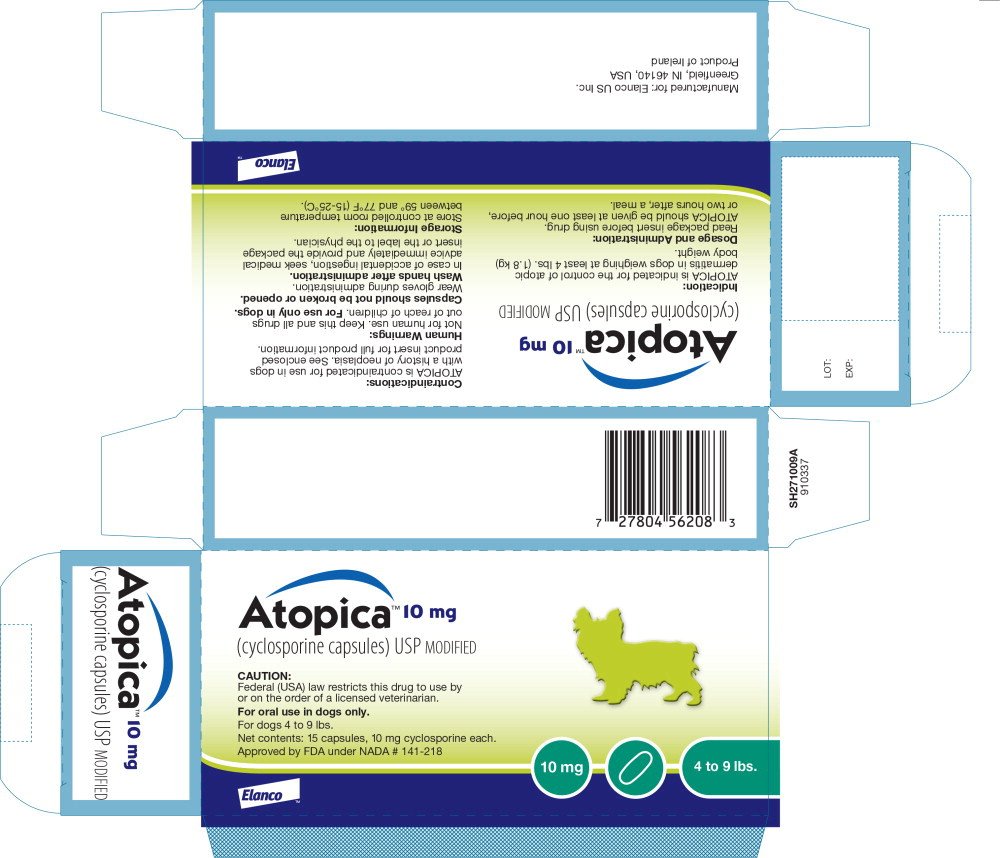 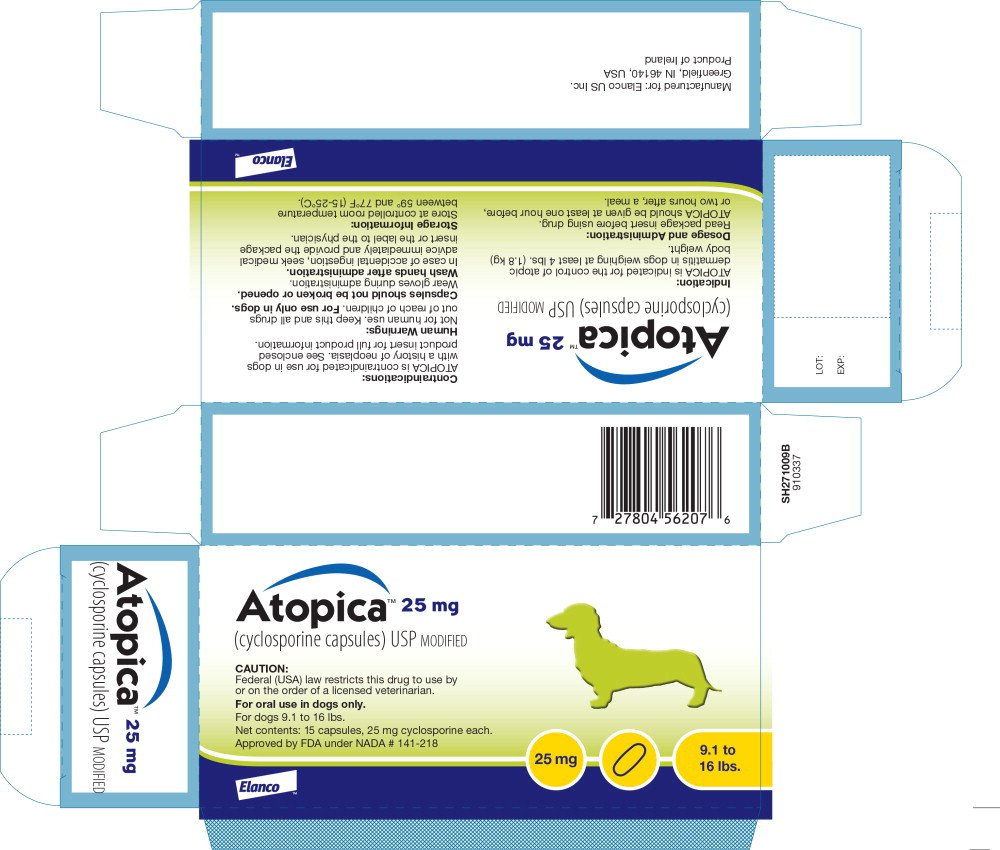 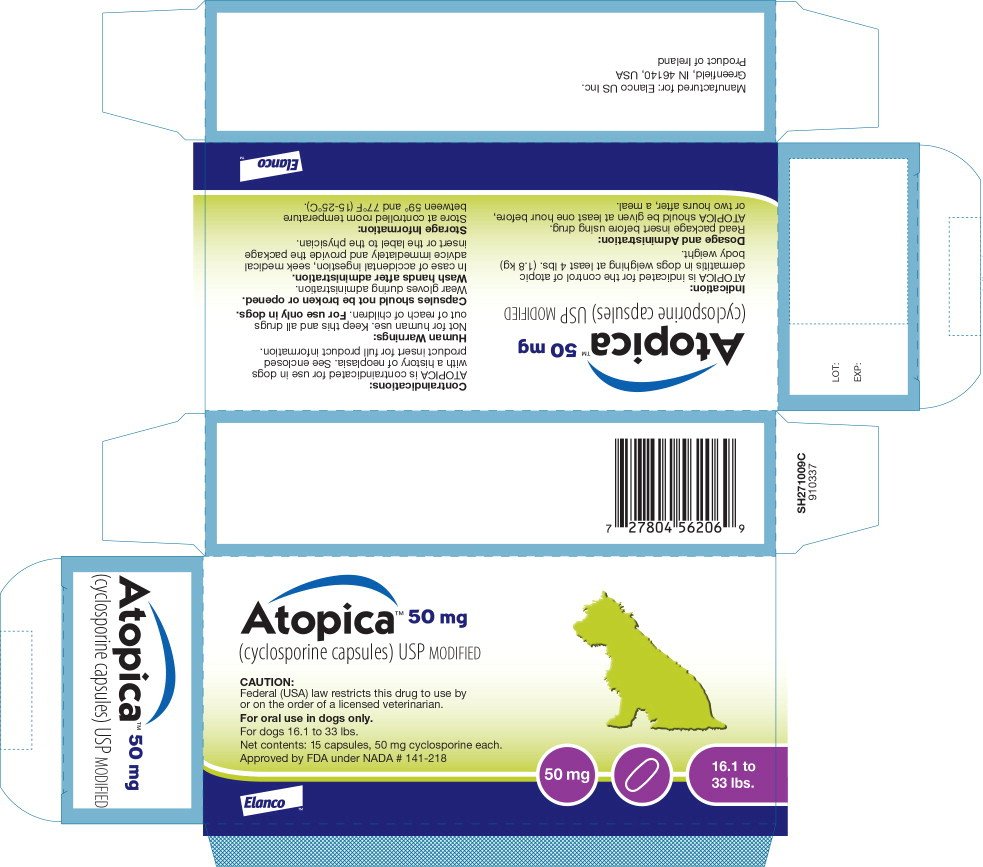 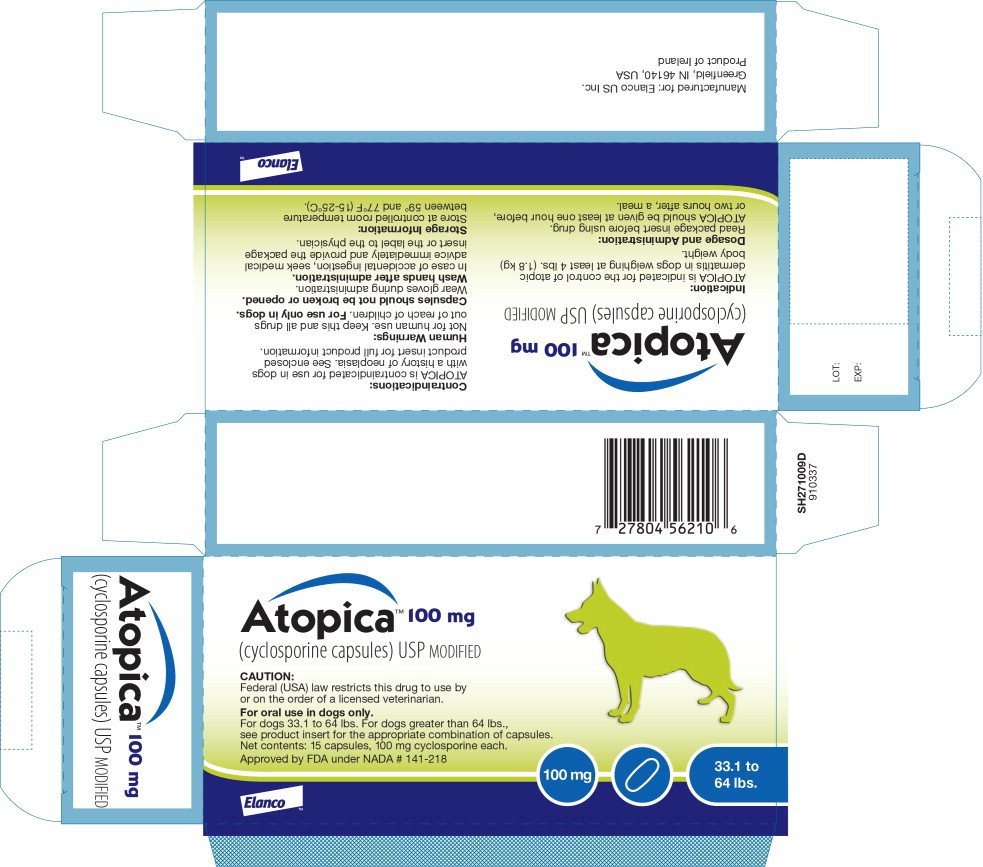