Indications and Usage for Anavip

For Intravenous use only.

The amount of antivenin required to treat a snake bitten patient is highly variable owing in part to the venom burden, the potency of the venom and the time to health care presentation. Use supportive measures to treat certain manifestations of North American Pit Viper envenomation, such as pain, swelling, hypotension, and wound infection. Contact the local poison control centers for additional individual treatment advice.

Anavip is supplied as a sterile, lyophilized powder. Each vial contains not more than 120 milligrams (mg) total protein and not less than the indicated number of mouse LD50 neutralizing units:

1The venom of these species is used in the manufacture of Anavip.

2The Mohave phenotype A is used for standardization.

Anavip may cause allergic reactions.

Anavip is made from equine (horse) plasma and may therefore carry a risk of transmitting infectious agents, e.g., viruses.

Trace amounts of cresol from the manufacturing process are contained in Anavip. Localized reactions and generalized myalgias have been reported with the use of cresol as an injectable excipient.

The most common adverse reactions observed in more than 2 percent (2%) of patients in the clinical trials for Anavip were: pruritus, nausea, rash, arthralgia, peripheral edema, erythema, headache, myalgia, pain in extremity, and vomiting.

A total of 86 patients were treated with Anavip, ranging from 2 to 80 years old. The patient population was comprised of 60 males and 26 females. Patients were monitored for signs and symptoms of adverse reactions including acute hypersensitivity reactions and serum sickness. Follow-up interviews were conducted at 5, 8, 15 and 22 days after treatment to assess symptoms of ongoing venom effect, serum sickness, and any other adverse reactions.

The following adverse reactions have been identified during post approval use of Anavip. Because these reactions are reported as monotherapy or in combination with other drugs and voluntarily from a global population of uncertain size, it is not always possible to reliably estimate their frequency or establish a causal relationship to drug exposure.

Risk Summary
Animal reproduction studies have not been conducted with Anavip. It is also not known whether Anavip can cause fetal harm when administered to a pregnant woman or can affect reproduction capacity. In the U.S. general population, the estimated background risk of major birth defects and miscarriage in clinically recognized pregnancies is 2-4% and 15-20% respectively.

Risk Summary
There is no information regarding the presence of Anavip in human milk, its effects on the breastfed infant, or its effect on milk production. The developmental and health benefits of breastfeeding should be considered along with the mother’s clinical need for Anavip and any potential adverse effects on the breastfed infant from Anavip or from the underlying material condition.

Over nine percent (9%; 8/86) of patients studied in clinical trials were over 65 years of age. The efficacy of Anavip in the geriatric population appears comparable to the overall population.

The manufacturing procedures that contribute to the reduction of risk of viral transmission include pepsin digestion, ammonium sulfate precipitation/heat treatment and nanofiltration.

Anavip contains venom-specific F(ab')2 fragments of immunoglobulin G (IgG) that bind and neutralize venom toxins, facilitating redistribution away from target tissues and elimination from the body.1,2

No pharmacodynamic studies were conducted on Anavip.

Thirteen healthy volunteers each received an intravenous (IV) dose of one vial (one vial = 81.86 mg) of an antivenin comparable to Anavip both in composition and manufacturing. On the first day of antivenin administration, blood samples were collected from all subjects at 16 specific time points: 0 (prior to drug infusion), 5, 10, 20, 30, 45, 60, 120, and 480 minutes after drug infusion. Additional samples were drawn just prior to discharge (Day 1), and on days 3, 5, 7, 9, 11, and 21. A two-compartment model best described the concentration-time data. The pharmacokinetic parameters of the antivenin are summarized in Table 3.

In a published non-Good Laboratory Practice study3, Anavip and another licensed North American Pit Viper antivenin were tested and cross-reactivity to the venoms of multiple different North American Pit Vipers was demonstrated in rabbits and mice. Animal studies to determine a no observed adverse effect level were unsuccessful due to technical limitations that prevented determination of a systematically toxic dose.

Anavip is standardized by its ability to neutralize the lethal action of each of the 7 venom immunogens following intravenous injection in mice. The potency of the product will vary from batch to batch; however, a minimum number of mouse LD50 neutralizing units against each of the 7 venoms is included in every vial of final product, as shown in Table 1 [see Dosage Forms and Strengths (3)].

Anavip was effective in neutralizing the venoms of 7 clinically important North American Pit Vipers in a murine lethality model see Table 1 [see Dosage Forms and Strengths(3)]. The ED50 data demonstrate the number of milligrams of antivenom necessary to neutralize a milligram of venom.

The amount of Anavip necessary to neutralize one milligram of venom was determined in a murine model. The dynamic between the venom and antivenom in a murine model provides a controlled environment to test the cross reactivity of antivenom against a variety of different snake venoms. Unlike the potency assays performed, as shown in Table 1 [see Dosage Forms and Strengths (3)], the effective dose study provides a mg per mg comparison for venoms from 7 species commonly associated with North American Pit Viper envenomations. The results for each species are shown in Table 4.

1C. scutulatus A is the Mohave phenotype containing neurotoxic venom

Study 1 was a randomized, prospective, open-label, controlled, comparative, multicenter study was conducted in 12 patients aged 18 to 70 years of age with signs of North American Pit Viper envenomation.6 The subjects received either a licensed North American Pit Viper antivenin as an active control, or Anavip. The subjects were dosed until initial control was achieved, followed by maintenance doses. All patients in both treatment groups achieved initial control of local injury and coagulopathy following early antivenin treatment.

The Follow-up Phase began immediately after the third maintenance dose. Patients returned to the clinical site on Days 5, 8, and 15 for scheduled follow-up visits. Patients with ongoing signs of envenomation received 4 vials of Anavip or 2 vials of Comparator product. Dosing was provided as needed until the patient was stabilized. One hundred twenty-one (121) patients received blinded study drug and were analyzed for safety and efficacy.

An exact logistic regression analysis adjusting for baseline coagulopathic effect and region was conducted and showed that treatment effect for both Groups 1 and 2 is statistically significant (Table 7). This analysis provides supportive evidence of the efficacy of Anavip.

Analysis by snakebite type was performed but was limited due to the number of unknown snakebite types (n=43). However, 57 subjects who were envenomated by rattlesnakes showed more severe coagulopathic effects and resolution of these effects after treatment with Anavip as compared to 21 subjects who were envenomated by copperhead snakes. Due to limited coagulopathic effects in the copperhead snake bite subgroup, efficacy outcomes for late coagulopathies could not be evaluated. 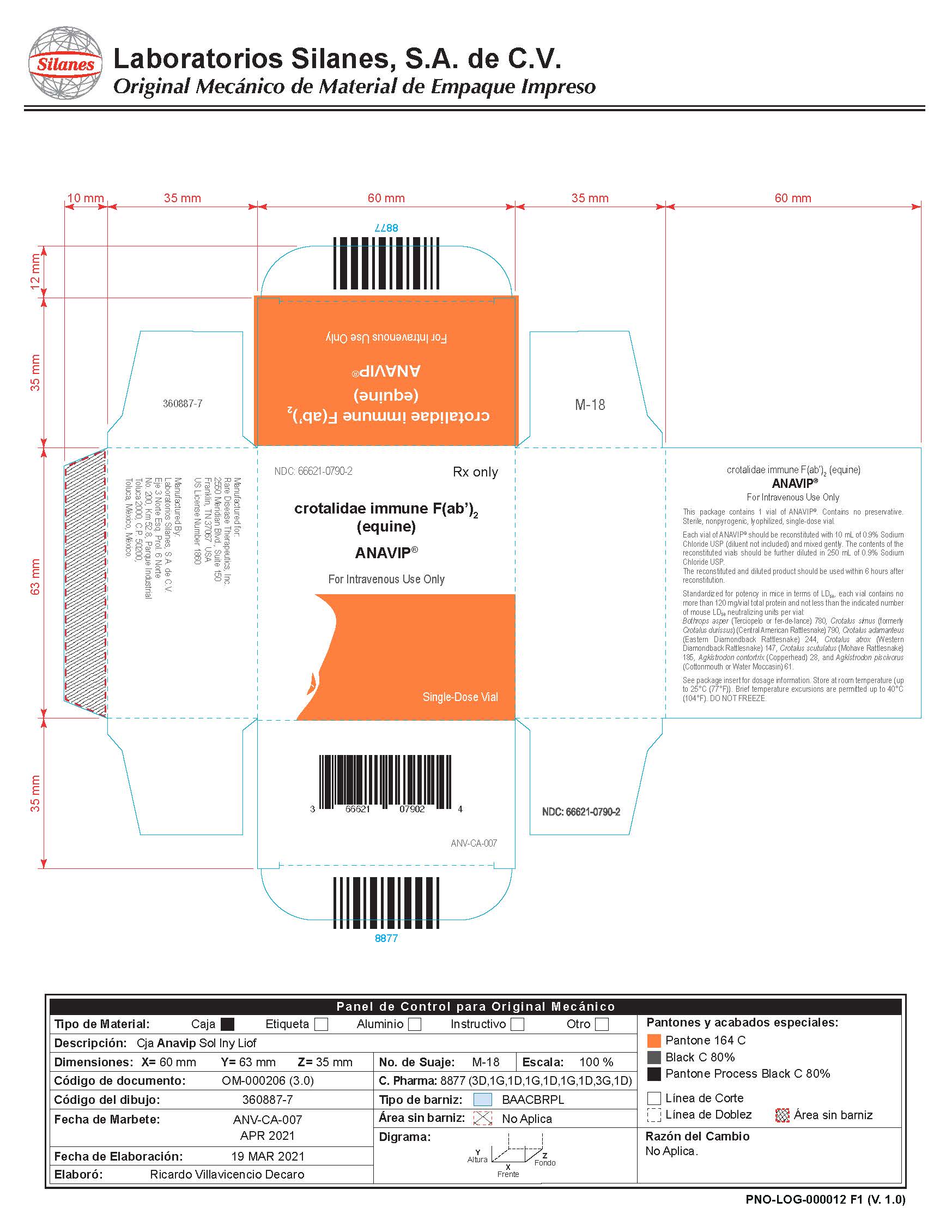 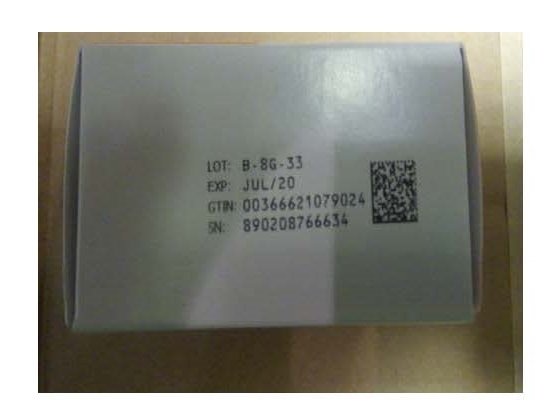 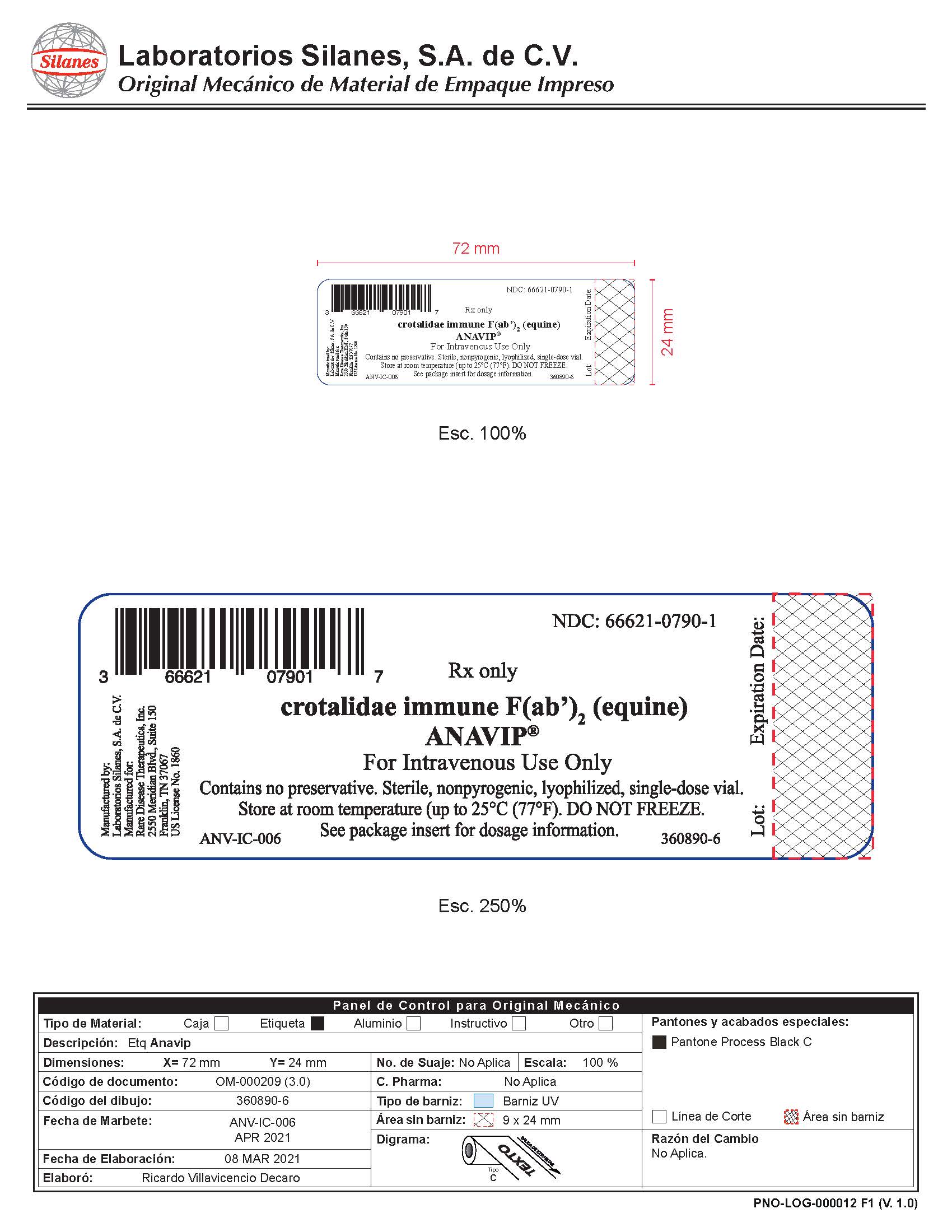