Central sleep apnea is a disorder in which your breathing repeatedly stops and starts during sleep.

Central sleep apnea can result from other conditions, such as heart failure and stroke. Another possible cause is sleeping at a high altitude.

Common signs and symptoms of central sleep apnea include:

Consult a medical professional if you have — or if your partner notices — any signs or symptoms of central sleep apnea, particularly the following:

Ask your doctor about any sleep problem that leaves you chronically fatigued, sleepy and irritable. Excessive daytime drowsiness can be due to other disorders, such as not allowing yourself time to get enough sleep at night (chronic sleep deprivation), sudden attacks of sleep (narcolepsy) or obstructive sleep apnea.

Central sleep apnea occurs when your brain fails to transmit signals to your breathing muscles.

Central sleep apnea can be caused by a number of conditions that affect the ability of your brainstem — which links your brain to your spinal cord and controls many functions such as heart rate and breathing — to control your breathing.

The cause varies with the type of central sleep apnea you have. Types include:

Central sleep apnea is a serious medical condition. Some complications include:

Your doctor might evaluate your condition based on your signs and symptoms or refer you to a sleep specialist in a sleep disorder center.

A sleep specialist can help you decide on your need for further evaluation. That might involve overnight monitoring of your breathing and other body functions during a sleep study called polysomnography.

During polysomnography, you're connected to equipment that monitors your heart, lung and brain activity, breathing patterns, arm and leg movements, and blood oxygen levels while you sleep. You may have a full-night or split-night sleep study.

In a split-night sleep study, you're monitored during the first half of the night. If you're diagnosed with central sleep apnea, staff might wake you and give you positive airway pressure for the second half of the night.

Polysomnography can help your doctor diagnose central sleep apnea. It can also help your doctor rule out other sleep disorders, such as obstructive sleep apnea, repetitive movements during sleep (periodic limb movements) or sudden attacks of sleep (narcolepsy), which can cause excessive daytime sleepiness but require different treatment.

Doctors trained in nervous system diseases (neurologists), heart diseases (cardiologists) and others might be involved in evaluating your condition. You might undergo imaging of your head or heart to look for contributing conditions.

Surgery or other procedures

A newer therapy for central sleep apnea is transvenous phrenic nerve stimulation. A system approved by the U.S. Food and Drug Administration (remedē System) delivers an electrical pulse to the nerve that controls the diaphragm (phrenic nerve) during sleep, which causes you to take a breath. This involves a battery-powered pulse generator that's implanted under the skin in the upper chest. 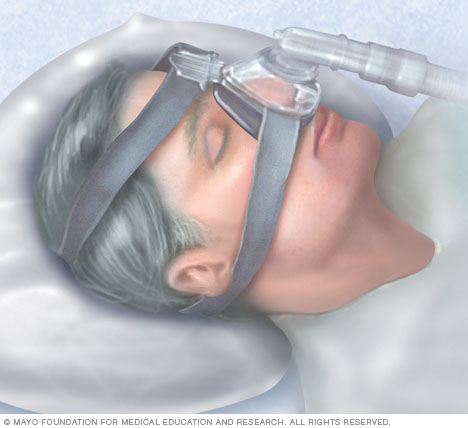 You're likely to start by seeing your primary care doctor. You might then be referred to a sleep specialist.

For central sleep apnea, some basic questions to ask your doctor include: