Blastocystis is a microscopic parasite that can live in your digestive tract. Researchers don't fully understand the role blastocystis plays, if any, in causing disease. Some people experiencing diarrhea, abdominal pain or other gastrointestinal problems have blastocystis organisms in their stool.

Most commonly, however, blastocystis organisms simply live in a person's digestive tract without causing harm.

Signs and symptoms possibly associated with blastocystis include:

See your doctor if you have signs and symptoms, such as diarrhea or abdominal pain, that lasts longer than three days.

Blastocystis is a microscopic single-celled organism (protozoan). Many parasitic protozoans normally live in your digestive tract and are harmless or even helpful; others cause disease.

It's not clear whether blastocystis causes disease. Most people who carry the organism have no signs or symptoms, but it's also found in people who have diarrhea and other digestive problems.

Explanations for this variability include:

Blastocystis can be passed between people and from animals to people. Transmission may be from: 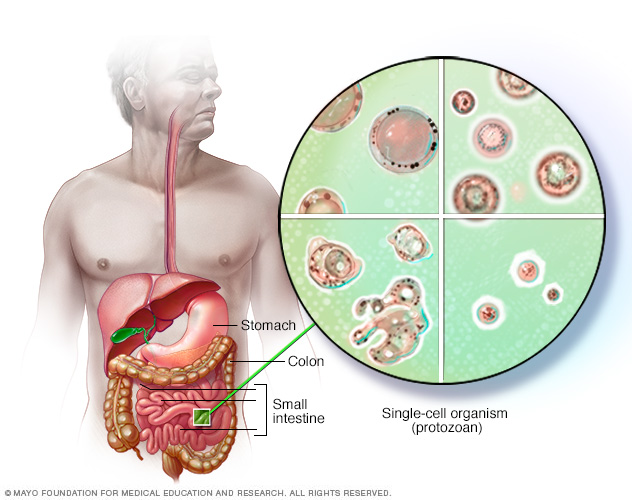 Blastocystis is common, but you may have a greater risk of exposure if you:

Wash your hands often with soap and water for at least 20 seconds. When you can't use soap and water, use a hand sanitizer that contains at least 60% alcohol.

When you travel, you can take steps to lower your risk of exposure to blastocystis. A general guideline is to avoid eating what you can't boil, cook or peel. More specifically, avoid:

If you're visiting a country with poor sanitation or possible unsafe drinking water, use the following tips:

If you have diarrhea and related symptoms, the cause may be difficult to diagnose. Even if blastocystis is found in your stool, it might not be causing your symptoms. Often another food- or water-borne organism is the likely cause of illness.

Your doctor will take your medical history, ask you about recent activities, such as traveling, and perform a physical exam. A number of lab tests help diagnose parasitic diseases and other noninfectious causes of gastrointestinal symptoms:

If you have a blastocystis infection without signs or symptoms, then you don't need treatment. Mild signs and symptoms might improve on their own within a few days.

Potential medications for eliminating a blastocystis infection and improving symptoms include:

Responses to these medications vary greatly. Also, because the organism might not be the cause of your symptoms, improvement might be due to the medication's effect on another organism.

You'll likely see your primary care doctor. However, in some cases, you might be referred to someone who specializes in either infectious disease or in digestive system disorders (gastroenterologist).

Be aware of pre-appointment restrictions. When you make the appointment, ask if there's anything you need to do in advance, such as restrict your diet.

Questions to ask your doctor include:

If your symptoms are related to blastocystis, they'll likely go away on their own before you even see your doctor. Stay well hydrated. Oral rehydration solutions — available through drugstores and health agencies worldwide — can replace lost fluids and electrolytes.