This page contains information on TorphaJect for veterinary use.
The information provided typically includes the following:

TORPHAJECT™ (Butorphanol Tartrate Injection) is a totally synthetic, centrally acting, narcotic agonist-antagonist analgesic with potent antitussive activity. It is a member of the phenanthrene series. The chemical name is Morphinan-3, 14-diol, 17-(cyclobutylmethyl)-, (-)-, (S-(R*, R*))-2, 3-dihydroxybutanedioate (1:1) (salt). It is a white, crystalline, water soluble substance having a molecular weight of 477.55: its molecular formula is C21H29NO2•C4H6O6.

As an antagonist, butorphanol is approximately equivalent to nalorphine and 30 times more potent than pentazocine.1

Cardiopulmonary depressant effects are minimal after treatment with butorphanol as demonstrated in dogs5, humans6,7 and horses.8 Unlike classical narcotic agonist analgesics which are associated with decreases in blood pressure, reduction in heart rate and concomitant release of histamine, butorphanol does not cause histamine release.1 Furthermore, the cardiopulmonary effects of butorphanol are not distinctly dosage-related but rather reach a ceiling effect beyond which further dosage increases result in relatively lesser effects.

Reproduction: Studies performed in mice and rabbits revealed no evidence of impaired fertility or harm to the fetus due to butorphanol tartrate. In the female rat, parenteral administration was associated with increased nervousness and decreased care for the newborn, resulting in a decreased survival rate of the newborn. This nervousness was seen only in the rat species.

Following intravenous injection in horses, butorphanol is largely eliminated from the blood within 3 to 4 hours. The drug is extensively metabolized in the liver and excreted in the urine.

In ponies, butorphanol given intramuscularly at a dosage of 0.22 mg/kg, was shown to alleviate experimentally induced visceral pain for about 4 hours.9

In horses, intravenous dosages of butorphanol ranging from 0.05 to 0.4 mg/kg were shown to be effective in alleviating visceral and superficial pain for at least 4 hours, as illustrated in the following figure: 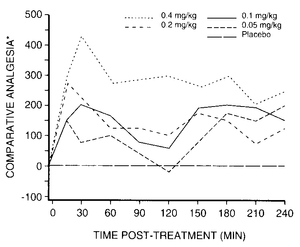 A definite dosage-response relationship was detected in that butorphanol dosage of 0.1 mg/kg was more effective than 0.05 mg/kg but not different from 0.2 mg/kg in alleviating deep abdominal pain.

Rapid intravenous administration of butorphanol at a dosage of 2 mg/kg (20 times the recommended dosage) to a previously unmedicated horse resulted in a brief episode of inability to stand, muscle fasciculation, a convulsive seizure of 6 seconds duration and recovery within three minutes. The same dosage administered after 10 successive daily 1 mg/kg dosages of butorphanol resulted only in transient sedative effects. During the 10-day course of administration at 1 mg/kg (10 times the recommended use level) in two horses, the only detectable drug effects were transient behavioral changes typical of narcotic agonist activity. These included muscle fasciculation about the head and neck, dysphoria, lateral nystagmus, ataxia and salivation. Repeated administration of butorphanol at 1 mg/kg (10 times the recommended dose) every four hours for 48 hours caused constipation in one of two horses.

Horses were found to tolerate butorphanol given intravenously at dosages of 0.1, 0.3 and 0.5 mg/kg every 4 hours for 48 hours followed by once daily injections for a total of 21 days. The only detectable drug effects were slight transient ataxia observed occasionally in the high dosage group. No clinical, laboratory, or gross or histopathologic evidence of any butorphanol related toxicity was encountered in the horses.

NOT FOR USE IN HORSES INTENDED FOR FOOD. NOT FOR HUMAN USE.

TORPHAJECT™ a potent analgesic, should be used with caution with other sedative or analgesic drugs as these are likely to produce additive effects.

There are no well-controlled studies using butorphanol in breeding horses, weanlings and foals. Therefore, the drug should not be used in these groups.

The recommended dosage in the horse is 0.1 mg of butorphanol per kilogram of body weight, (0.05 mg/lb) by intravenous injection. This is equivalent to 5 mL of TORPHAJECT™ for each 1000 lb body weight. The dose may be repeated within 3 to 4 hours but treatment should not exceed 48 hours. Pre-clinical model studies and clinical field trials in horses demonstrate that the analgesic effects of TORPHAJECT™ are seen within 15 minutes following injection and persist for about 4 hours.

FOR USE IN HORSES ONLY