Teslac® (testolactone tablets, USP) is available for oral administration as tablets providing 50 mg testolactone per tablet. Testolactone is a synthetic antineoplastic agent that is structurally distinct from the androgen steroid nucleus in possessing a six-membered lactone ring in place of the usual five-membered carbocyclic D-ring. Testolactone is chemically designated as 13-hydroxy-3-oxo-13,17-secoandrosta-1,4-dien-17-oic acid δ-lactone. Graphic formula: 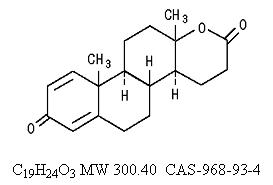 Testolactone is a white, odorless, crystalline solid, soluble in ethanol and slightly soluble in water.

Although the precise mechanism by which testolactone produces its clinical antineoplastic effects has not been established, its principal action is reported to be inhibition of steroid aromatase activity and consequent reduction in estrone synthesis from adrenal androstenedione, the major source of estrogen in postmenopausal women. Based on in vitro studies, the aromatase inhibition may be noncompetitive and irreversible. This phenomenon may account for the persistence of testolactone’s effect on estrogen synthesis after drug withdrawal.

Despite some similarity to testosterone, testolactone has no in vivo androgenic effect. No other hormonal effects have been reported in clinical studies in patients receiving testolactone. In one study, testolactone administered orally (1000 mg/day) was reported to increase renal tubular reabsorption of calcium but to have no effect on serum calcium concentration. The mechanism of the hypocalciuric effect is unknown. No clinical effects in humans of testolactone on adrenal function have been reported; however, one study noted an increase in urinary excretion of 17-ketosteroids in most of the patients treated with 150 mg/day orally.

Testolactone is well absorbed from the gastrointestinal tract. It is metabolized to several derivatives in the liver, all of which preserve the lactone D-ring. These metabolites, as well as some unmetabolized drug, are excreted in the urine. Additional pharmacokinetic data in humans are unavailable.

In animals, parenteral but not oral testolactone reduced cortisone acetate induced hepatic glycogen deposits. In animal tests conducted to detect any hormonal activity for testolactone, some evidence of antiandrogenic and antiglucocorticoid activity was seen; increased growth rate in the newborn was suggested. However there was no clear manifestation of androgenic, estrogenic or antiestrogenic, progestational or antiprogestational, gonadotropin-like or antigonadotropic effects. Testolactone did not demonstrate anti-inflammatory, mineralocorticoid-like, or glucocorticoid-like properties.

Indications and Usage for Teslac

Teslac (testolactone tablets, USP) is recommended as adjunctive therapy in the palliative treatment of advanced or disseminated breast cancer in postmenopausal women when hormonal therapy is indicated. It may also be used in women who were diagnosed as having had disseminated breast carcinoma when premenopausal, in whom ovarian function has been subsequently terminated.

Teslac (testolactone tablets, USP) was found to be effective in approximately 15 percent of patients with advanced or disseminated mammary cancer evaluated according to the following criteria: 1) those with a measurable decrease in size of all demonstrable tumor masses; 2) those in whom more than 50 percent of non-osseous lesions decreased in size although all bone lesions remained static; and 3) those in whom more than 50 percent of total lesions improved while the remainder were static.

Testolactone is contraindicated in the treatment of breast cancer in men and in patients with a history of hypersensitivity to the drug.

The physician should be consulted regarding missed doses. Notify the physician if adverse reactions occur or become more pronounced.

Plasma calcium levels should be routinely determined in any patient receiving therapy for mammary cancer, particularly during periods of active remission of bony metastases. If hypercalcemia occurs, appropriate measures should be instituted.

No long-term animal studies have been performed to evaluate carcinogenic potential or mutagenesis. Testolactone did not affect fertility in male or female rats.

Insufficient data from clinical studies of Teslac are available for patients 65 years of age and older to determine whether they respond differently than younger patients. Other reported clinical experience has not identified differences in responses between elderly and younger patients. In general, caution should be exercised when prescribing to elderly patients, reflecting the greater frequency of decreased hepatic, renal, or cardiac function, and of concomitant disease or other drug therapy.

Testolactone and its metabolites appear to be substantially excreted by the kidney, and the risk of toxic reactions to this drug may be greater in patients with impaired renal function. Because elderly patients are more likely to have decreased renal function, care should be taken in dose selection, and it may be useful to monitor renal function.

Certain signs and symptoms have been reported in association with the use of this drug but, in these instances, it is often impossible to determine the relationship of the underlying disease and drug administration to the reported reaction. Such reactions include maculopapular erythema, increase in blood pressure, paresthesia, malaise, aches and edema of the extremities, glossitis, anorexia and nausea and vomiting. Alopecia alone and with associated nail growth disturbance have been reported rarely; these side effects subsided without interruption of treatment.

Teslac is classified as a controlled substance under the Anabolic Steroids Control Act of 1990 and has been assigned to Schedule III.

There have been no reports of acute overdosage with testolactone tablets.

In order to evaluate the response, therapy with testolactone should be continued for a minimum of three months unless there is active progression of the disease. 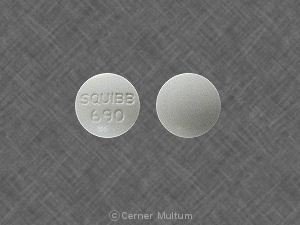