WARNING: DEATH RELATED TO ULTRA-RAPID METABOLISM OF CODEINE TO MORPHINE
Respiratory depression and death have occurred in children who received codeine following tonsillectomy and/or adenoidectomy and had evidence of being ultra-rapid metabolizers of codeine due to a CYP2D6 polymorphism.

The Synalgos-DC brand name has been discontinued in the U.S. If generic versions of this product have been approved by the FDA, there may be generic equivalents available.

Dihydrocodeine is a semisynthetic narcotic analgesic, related to codeine, with multiple actions qualitatively similar to those of codeine; the most prominent of these involve the central nervous system and organs with smooth-muscle components. The principal action of therapeutic value is analgesia.

Indications and Usage for Synalgos-DC

For the relief of moderate to moderately severe pain.

Synalgos-DC is contraindicated for postoperative pain management in children who have undergone tonsillectomy and/or adenoidectomy.

Synalgos-DC is contraindicated in patients with hypersensitivity to dihydrocodeine, codeine, or aspirin

Salicylates should be used with extreme caution in the presence of peptic ulcer or coagulation abnormalities.

Death Related to Ultra-Rapid Metabolism of Codeine to Morphine

Respiratory depression and death have occurred in children who received codeine in the post-operative period following tonsillectomy and/or adenoidectomy and had evidence of being ultra-rapid metabolizers of codeine (i.e., multiple copies of the gene for cytochrome P450 isoenzyme 2D6 or high morphine concentrations). Deaths have also occurred in nursing infants who were exposed to high levels of morphine in breast milk because their mothers were ultra-rapid metabolizers of codeine.

Some individuals may be ultra-rapid metabolizers because of a specific CYP2D6 genotype (gene duplications denoted as *1/*1xN or *1/*2xN). The prevalence of this CYP2D6 phenotype varies widely and has been estimated at 0.5 to 1% in Chinese and Japanese, 0.5 to 1% in Hispanics, 1 to 10% in Caucasians, 3% in African Americans, and 16 to 28% in North Africans, Ethiopians, and Arabs. Data are not available for other ethnic groups. These individuals convert dihydrocodeine into its active metabolite, dihydromorphine, more rapidly and completely than other people. This rapid conversion results in higher than expected serum dihydromorphine levels. Even at labeled dosage regimens, individuals who are ultra-rapid metabolizers may have life-threatening or fatal respiratory depression or experience signs of overdose (such as extreme sleepiness, confusion, or shallow breathing).

Children with obstructive sleep apnea who are treated with codeine for post-tonsillectomy and/or adenoidectomy pain may be particularly sensitive to the respiratory depressant effects of codeine that has been rapidly metabolized to morphine. Synalgos-DC is contraindicated for post-operative pain management in all pediatric patients undergoing tonsillectomy and/or adenoidectomy [see Contraindications].

When prescribing dihydrocodeine-containing drugs, healthcare providers should choose the lowest effective dose for the shortest period of time and inform patients and caregivers about these risks and the signs of dihydromorphine overdose.

Dihydrocodeine can produce drug dependence of the codeine type and therefore has the potential of being abused. Psychic dependence, physical dependence, and tolerance may develop upon repeated administration of dihydrocodeine, and it should be prescribed and administered with the same degree of caution appropriate to the use of other oral narcotic-containing medications. Like other narcotic-containing medications, dihydrocodeine is subject to the provisions of the Federal Controlled Substances Act.

Dihydrocodeine may impair the mental and/or physical abilities required for the performance of potentially hazardous tasks, such as driving a car or operating machinery. The patient using Synalgos-DC should be cautioned accordingly.

Patients receiving other narcotic analgesics, general anesthetics, tranquilizers, sedative-hypnotics, or other CNS depressants (including alcohol) concomitantly with Synalgos-DC may exhibit an additive CNS depression. When such combined therapy is contemplated, the dose of one or both agents should be reduced.

Reproduction studies have not been performed in animals. There is no adequate information on whether this drug may affect fertility in human males and females or has a teratogenic potential or other adverse effect on the fetus.

The risk of infant exposure to dihydrocodeine and dihydromorphine through breast milk should be weighed against the benefits of breastfeeding for both the mother and the baby. Caution should be exercised when dihydrocodeine is administered to a nursing woman. If a dihydrocodeine containing product is selected, the lowest dose should be prescribed for the shortest period of time to achieve the desired clinical effect. Mothers using dihydrocodeine should be informed about when to seek immediate medical care and how to identify the signs and symptoms of neonatal toxicity, such as drowsiness or sedation, difficulty breastfeeding, breathing difficulties, and decreased tone, in their baby. Nursing mothers who are ultra-rapid metabolizers may also experience overdose symptoms such as extreme sleepiness, confusion, or shallow breathing. Prescribers should closely monitor mother-infant pairs and notify treating pediatricians about the use of dihydrocodeine during breast-feeding [see Warnings].

Aspirin and caffeine are also excreted in breast milk in small amounts. Because of the potential for serious adverse reactions in nursing infants from this combination product, a decision should be made whether to discontinue nursing or to discontinue the drug, taking into account the importance of the drug to the mother.

Preparations containing aspirin should be kept out of the reach of children. Synalgos-DC is not recommended for patients 12 years of age and under. Since there is no experience in chil­dren who have received this drug, safety and efficacy in children have not been established.

Respiratory depression and death have occurred in children with obstructive sleep apnea who received codeine in the post-operative period following tonsillectomy and/or adenoidectomy and had evidence of being ultra-rapid metabolizers of codeine (i.e., multiple copies of the gene for cytochrome P450 isoenzyme 2D6 or high morphine concentrations). These children may be particularly sensitive to the respiratory depressant effects of codeine that has been rapidly metabolized to morphine. Synalgos-DC is contraindicated for post-operative pain management in all pediatric patients undergoing tonsillectomy and/or adenoidectomy [see Contraindications].

Synalgos-DC should be given with caution to certain patients, such as the elderly or debilitated.

Advise patients that some people have a genetic variation that results in dihydrocodeine changing into dihydromorphine more rapidly and completely than other people. Most people are unaware of whether they are an ultra-rapid dihydrocodeine metabolizer or not. These higher-than-normal levels of dihydromorphine in the blood may lead to life-threatening or fatal respiratory depression or signs of overdose such as extreme sleepiness, confusion, or shallow breathing. Children with this genetic variation who were prescribed codeine after tonsillectomy and/or adenoidectomy for obstructive sleep apnea may be at greatest risk based on reports of several deaths in this population due to respiratory depression. Synalgos- DC is contraindicated in all children who undergo tonsillectomy and/or adenoidectomy. Advise caregivers of children receiving Synalgos-DC for other reasons to monitor for signs of respiratory depression.

Advise patients that nursing mothers taking dihydrocodeine can have higher dihydromorphine levels in their breast milk if they are ultra-rapid metabolizers. These higher levels of dihydromorphine in breast milk may lead to life-threatening or fatal side effects in nursing babies. Advise nursing mothers to watch for signs of dihydromorphine toxicity in their infants which includes increased sleepiness (more than usual), difficulty breastfeeding, breathing difficulties, or limpness. Instruct nursing mothers to talk to the baby’s doctor immediately if they notice these signs and, if they cannot reach the doctor right away, to take the baby to an emergency room or call 911 (or local emergency services).

The CNS-depressant effects of Synalgos-DC may be additive with that of other CNS depressants. See “WARNINGS.”

Clinical studies of Synalgos-DC did not include sufficient numbers of subjects aged 65 and over to determine whether elderly subjects respond differently from younger subjects.

In general, dose selection for an elderly patient should be cautious, starting at the low end of the dosing range, reflecting the greater frequency of decreased hepatic, renal, or cardiac function, and of concomitant disease or other drug therapy.

Dosage should be adjusted according to the severity of the pain and the response of the patient. Synalgos-DC is given orally. The usual adult dose is two capsules every 4 hours as need­ed for pain.

SEALED FOR YOUR PROTECTION 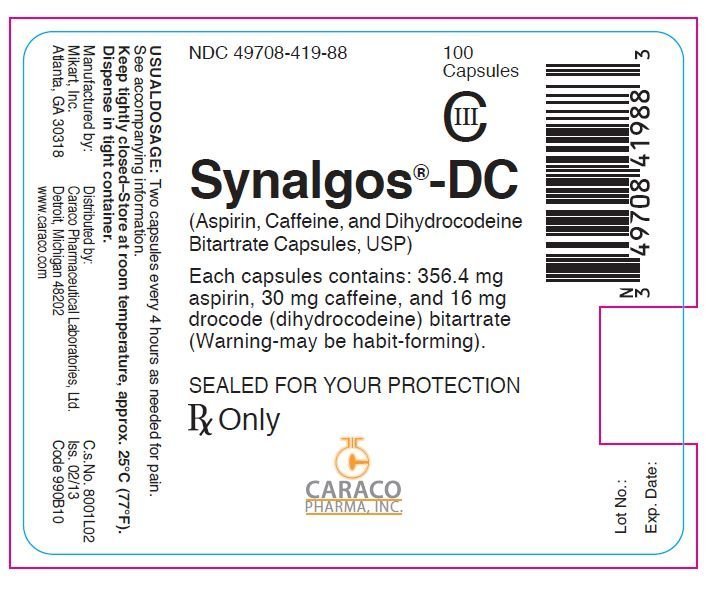