Skelid is a bisphosphonate characterized by a (4-chlorophenylthio) group on the carbon atom of the basic P-C-P structure common to all bisphosphonates. Its generic name is tiludronate disodium. Tiludronate disodium is the hydrated hemihydrate form of the disodium salt of tiludronic acid. Its chemical name is [[(4-Chlorophenyl) thio]methylene]bis[phosphonic acid], disodium salt, and its structural formula is as follows:

In vitro studies indicate that tiludronate disodium acts primarily on bone through a mechanism that involves inhibition of osteoclastic activity with a probable reduction in the enzymatic and transport processes that lead to resorption of the mineralized matrix.

Bone resorption occurs following recruitment, activation, and polarization of osteoclasts. Tiludronate disodium appears to inhibit osteoclasts through at least two mechanisms: disruption of the cytoskeletal ring structure, possibly by inhibition of protein-tyrosine-phosphatase, thus leading to detachment of osteoclasts from the bone surface and the inhibition of the osteoclastic proton pump.

Animal pharmacology studies in rats demonstrate that tiludronic acid is widely distributed to bone and soft tissues. Over a period of days, loss of drug occurs from most tissues with the exception of bone and cartilage. Tiludronate is then slowly released from bone with a half-life in rats of 30 days or longer depending on the status of bone turnover.

After oral administration of doses equivalent to 400 mg/day tiludronic acid to nonpagetic patients with osteoarthrosis, the steady state in bone was not reached after 30 days of dosing. At plasma concentrations between 1 and 10 mg/L, tiludronic acid was approximately 90% bound to human serum protein (mainly albumin).

No dosage adjustment in elderly patients is necessary. Plasma concentrations of tiludronic acid were higher in elderly pagetic patients (≥65 years of age); however, this difference was not clinically significant.

Skelid pharmacokinetics have not been investigated in subjects under the age of 18 years.

There were no clinically significant differences in plasma concentrations after repeated administration of tiludronate disodium to male and female pagetic patients.

Pharmacokinetic differences due to race have not been studied.

Skelid is not recommended for patients with severe renal failure (creatinine clearance <30 mL/min) due to lack of clinical experience. After a single oral dose equivalent to 400 mg tiludronic acid, subjects with creatinine clearance between 11 and 18 mL/min had Cmax values (approximately 3 mg/L) in the range of healthy volunteers. However, the plasma elimination half-life was approximately 205 hours, which is longer than that observed in pagetic patients after repeated doses (150 hours) and healthy subjects after single doses (50 hours). These values were obtained in a cross-study comparison between healthy volunteers and pagetic patients.

No dosage adjustment is needed. Since tiludronate undergoes little or no metabolism, no studies were conducted in subjects with hepatic insufficiency.

(See also PRECAUTIONS, Drug Interactions.) The bioavailability of Skelid is decreased 80% by calcium, when calcium and Skelid are administered at the same time, and 60% by some aluminum- or magnesium-containing antacids, when administered 1 hour before Skelid. Aspirin may decrease bioavailability of Skelid by up to 50% when taken 2 hours after Skelid. The bioavailability of Skelid is increased 2–4 fold by indomethacin and is not significantly altered by coadministration of diclofenac. The pharmacokinetic parameters of digoxin are not significantly modified by Skelid coadministration. In vitro studies show that tiludronate disodium does not displace warfarin from its binding site on protein.

Clinical manifestations of Paget's disease range from no symptoms to severe bone pain, bone deformity, pathological fractures, and neurological and other complications. Serum alkaline phosphatase, the most frequently used biochemical index of disease activity, provides an objective measure of disease severity and response to therapy.

In pagetic patients treated with Skelid 400 mg/day for 3 months, changes in urinary hydroxyproline, a biochemical marker of bone resorption, and in serum alkaline phosphatase, a marker of bone formation, indicate a reduction toward normal in the rate of bone turnover. In addition, reduced numbers of osteoclasts by histomorphometric analysis and radiological improvement of lytic lesions indicate that Skelid can suppress the pagetic disease process. 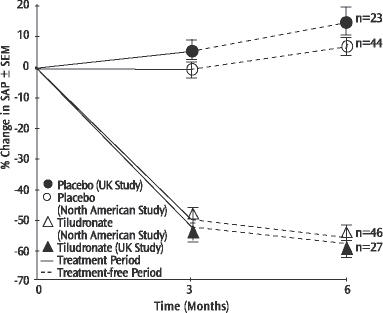 In the placebo-controlled trials, suppression of SAP levels was statistically significantly greater with 400 mg/day Skelid both at the end of treatment (3 months) and on follow-up (6 months) than with placebo (See Figure 1). The proportion of patients demonstrating at least a 50% reduction in SAP at 3 months with 400 mg/day Skelid was 61% in the North American study and 52% in the UK study. 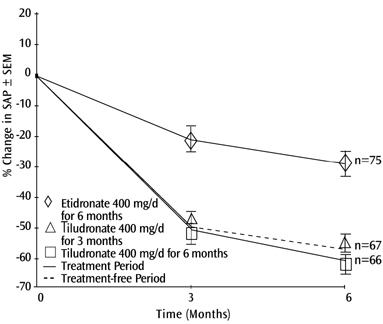 Treatment effects of Skelid were similar, regardless of pagetic patients' baseline SAP level, gender or age in the population studied.

Histomorphometry of the bone was studied in 19 pagetic and 29 nonpagetic patients. Bone biopsy results in nonpagetic bone confirmed that Skelid did not impair bone remodeling or induce a significant decline in bone turnover. Results obtained in pagetic and nonpagetic bone indicated no evidence of osteomalacia or accumulation of unmineralized osteoid, and there was no reduction in the mineralization rate.

Indications and Usage for Skelid

Skelid is indicated for treatment of Paget's disease of bone (osteitis deformans).

Treatment is indicated in patients with Paget's disease of bone (1) who have a level of serum alkaline phosphatase (SAP) at least twice the upper limit of normal, or (2) who are symptomatic, or (3) who are at risk for future complications of their disease.

Skelid is contraindicated in individuals with known hypersensitivity to any component of this product.

Inability to stand or sit upright for at least 30 minutes.

Skelid, like other bisphosphonates administered orally, may cause local irritation of the upper gastrointestinal mucosa. Because of these possible irritant effects and a potential for worsening of the underlying disease, caution should be used when Skelid is given to patients with active upper gastrointestinal problems (such as known Barrett's esophagus, dysphagia, other esophageal diseases, gastritis, duodenitis, or ulcers).

Esophageal adverse experiences, such as esophagitis, esophageal ulcers and esophageal erosions, occasionally with bleeding and rarely followed by esophageal stricture or perforation, have been reported in patients receiving treatment with oral bisphosphonates. In some cases, these have been severe and required hospitalization. Physicians should therefore be alert to any signs or symptoms signaling a possible esophageal reaction and patients should be instructed to discontinue Skelid and seek medical attention if they develop dysphagia, odynophagia, retrosternal pain or new or worsening heartburn.

The risk of severe esophageal adverse experiences appears to be greater in patients who lie down after taking oral bisphosphonates and/or who fail to swallow it with the recommended full glass (6–8oz) of water, and/or who continue to take oral bisphosphonates after developing symptoms suggestive of esophageal irritation. Therefore, it is very important that the full dosing instructions are provided to, and understood by, the patient (see DOSAGE AND ADMINISTRATION). In patients who cannot comply with dosing instructions due to mental or physical disability, therapy with Skelid should be used under appropriate supervision.

There have been post-marketing reports of gastric and duodenal ulcers with oral bisphosphonate use, some severe and with complications, although no increased risk was observed in controlled clinical trials.

Skelid is not recommended for patients with severe renal failure, for example, those with creatinine clearance <30 mL/min (see CLINICAL PHARMACOLOGY, Renal Insufficiency).

For patients who develop osteonecrosis of the jaw (ONJ) while on bisphosphonate therapy, dental surgery may exacerbate the condition. For patients requiring dental procedures, there are no data available to suggest whether discontinuation of bisphosphonate treatment reduces the risk of ONJ. Clinical judgement of the treating physician should guide the management plan of each patient based on individual benefit/risk assessment.

In post marketing experience, severe and occasionally incapaciting bone, joint, and/or muscle pain has been reported in patients taking bisphosphonates. However, such reports have been infrequent. This category of drugs includes Skelid. The time to onset of symptoms varied from one day to several months after starting the drug. Most patients had relief of symptoms after stopping. A subset had recurrence of symptoms when rechallenged with the same drug or another bisphosphonate.

Patients receiving Skelid should be instructed to:

Carcinogenicity studies have not yet been completed.

Tiludronate was not genotoxic in the following assays: an in vitro microbial mutagenesis assay with and without metabolic activation, a human lymphocyte assay, a yeast cell assay for forward mutation and mitotic crossing over, or the in vivo mouse micronucleus test.

Tiludronate had no effect on rat fertility (male or female) at exposures up to two times the 400 mg/day human dose, based on surface area, mg/m2 (75 mg/kg/day tiludronic acid dose).

In a teratology study in rabbits dosed during days 6–18 of gestation at 42 mg/kg/day and 130 mg/kg/day (2 and 5 times the 400 mg/day human dose based on body surface area), there was dose-related scoliosis likely attributable to the pharmacologic properties of the drug.

Maternal toxicity (decreased body weight) was also observed in a teratology study in rats dosed during days 6–18 of gestation at 375 mg/kg/day tiludronic acid (10 times the 400 mg/day human dose based on body surface area, mg/m2). There were reduced percent implantations, increased postimplantation loss, and increased intra-uterine deaths in the rats. There were no teratogenic effects on fetuses.

Protracted parturition and maternal death, presumably due to hypocalcemia, occurred at 75 mg/kg/day tiludronic acid (two times the 400 mg/day human dose based on body surface area, mg/m2) when rats were treated from day 15 of gestation to day 25 postpartum.

There are no adequate and well-controlled studies in pregnant women. Skelid should be used during pregnancy only if the potential benefit justifies the potential risk to the fetus.

Safety and effectiveness of Skelid in pediatric patients have not been established.

The safety of Skelid has been studied in more than 1100 patients, and the adverse experience profile is similar between controlled and uncontrolled clinical trials. Adverse events occurring in placebo-controlled trials of pagetic patients treated with Skelid 400 mg/day are presented in the table below.

The most frequently occurring adverse events in patients who received Skelid 400 mg/day were in the gastrointestinal body system: nausea (9.3%), diarrhea (9.3%), and dyspepsia (5.3%).

Other adverse events not listed in the table above but reported in ≥1% of pagetic patients treated with Skelid in all clinical trials of at least one month duration, regardless of dose and causality assessment, are listed below. The adverse event terms within each body system are listed in the order of decreasing frequency occurring in the population.

Stevens-Johnson type syndrome has been observed rarely; the causality relationship of this to Skelid has not been established.

Based on the known action of tiludronate, hypocalcemia is a potential consequence of Skelid overdose. In one patient with hypercalcemia of malignancy, intravenous administration of high doses of Skelid (800 mg/day total dose, 6 mg/kg/day for 2 days) was associated with acute renal failure and death.

No specific information is available on the treatment of overdose with Skelid. Dialysis would not be beneficial. Standard medical practices may be used to manage renal insufficiency or hypocalcemia, if signs of these develop.

A single 400-mg daily oral dose of Skelid, taken with 6 to 8 ounces of plain water only, should be administered for a period of 3 months. Beverages other than plain water (including mineral water), food (see below), and some medications (see PRECAUTIONS, Drug Interactions) are likely to reduce the absorption of Skelid (see CLINICAL PHARMACOLOGY, Pharmacokinetics).

Patients should not lie down for at least 30 minutes after taking this medication. In patients who cannot comply with dosing instructions due to mental or physical disability, therapy with Skelid should be used under appropriate supervision (See WARNINGS).

Skelid should not be taken within 2 hours of food.

Skelid should not be taken within 2 hours of indomethacin.

Skelid is supplied as white to practically white, biconvex round tablets containing 240 mg tiludronate disodium, which is the molar equivalent of 200 mg tiludronic acid. Skelid tablets are engraved with "S.W" on one side and "200" on the other side and packaged in foil strips in cartons of 56 tablets per carton (0024-1800-16). 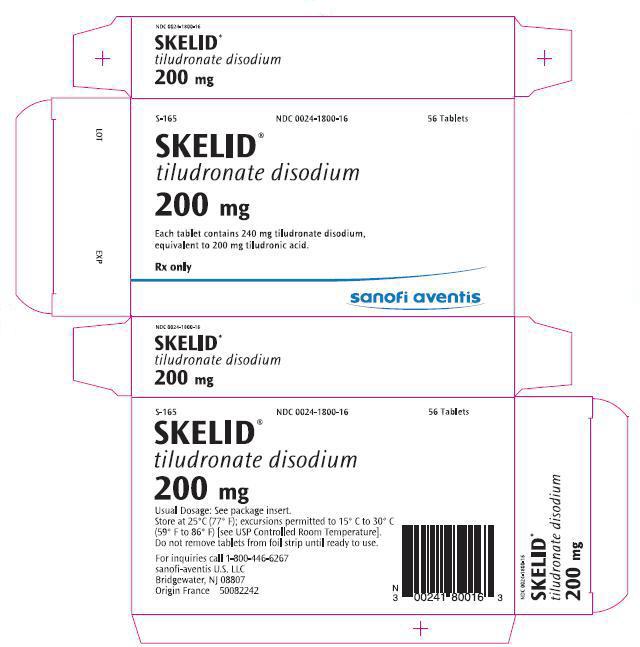