Rubramin PC (Cyanocobalamin Injection) contains cyanocobalamin (vitamin B12) in a clear, red, sterile, nonpyrogenic, aqueous solution in a potency of 1000 mcg/mL (cobalt: 40 mcg/mL) for intramuscular use. Each mL of solution also contains 10 mg benzyl alcohol as a preservative and sodium chloride for isotonicity; pH has been adjusted between 4.5 and 7.0 with sodium hydroxide or hydrochloric acid.

Cyanocobalamin is very hygroscopic in the anhydrous form, and sparingly soluble in water (1:80). The vitamin B12 coenzymes are very unstable in light.

Cyanocobalamin may be chemically designated as 5,6-dimethyl-benzimidazolyl cyanocobamide. The structural formula is represented below: 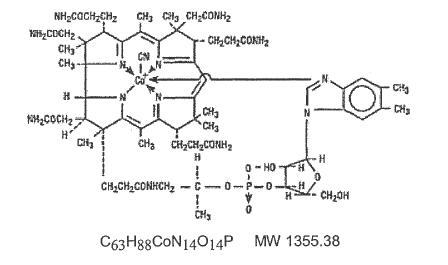 Vitamin B12 is essential to growth, cell reproduction, hematopoiesis, and nucleoprotein and myelin synthesis.

Cyanocobalamin is quantitatively and rapidly absorbed from intramuscular sites of injection; the plasma level of the compound reaches its peak within one hour after intramuscular injection. Absorbed vitamin B12 is transported via specific B12 binding proteins, transcobalamin I and II to the various tissues. The liver is the main organ for vitamin B12 storage.

Within 48 hours after injection of 1000 mcg of vitamin B12, 50 to 98 percent of the injected dose may appear in the urine. The major portion is excreted within the first eight hours.

The average diet supplies about 5 to 15 mcg/day of vitamin B12 in a protein-bound form that is available for absorption after normal digestion. Vitamin B12 is not present in foods of plant origin, but is abundant in foods of animal origin. In people with normal absorption, deficiencies have been reported only in strict vegetarians who consume no products of animal origin (including milk products or eggs).

Vitamin B12 is bound to intrinsic factor during transit through the stomach; separation occurs in the terminal ileum in the presence of calcium, and vitamin B12 enters the mucosal cell for absorption. It is then transported by the transcobalamin binding proteins. A small amount (approximately 1 percent of the total amount ingested) is absorbed by simple diffusion, but this mechanism is adequate only with very large doses. Oral absorption is considered too unreliable in patients with pernicious anemia or other conditions resulting in malabsorption of vitamin B12.

Cyanocobalamin is the most widely used form of vitamin B12, and has hematopoietic activity apparently identical to that of the anti-anemia factor in purified liver extract. Hydroxycobalamin is equally as effective as cyanocobalamin, and they share the cobalamin molecular structure.

Indications and Usage for Rubramin PC

Rubramin PC is indicated for use as the flushing dose in the Schilling (vitamin B12 absorption) Test for pernicious anemia.

This preparation is contraindicated in patients who are sensitive to cobalt and/or vitamin B12.

Patients who have early Leber’s disease (hereditary optic nerve atrophy) have been found to suffer severe and swift optic atrophy when treated with vitamin B12.

Fatal hypokalemia may occur when severe megaloblastic anemia is treated intensively with vitamin B12, as a result of increased erythrocyte potassium requirements (see PRECAUTIONS, Laboratory Tests).

Anaphylactic shock and death have been reported after parenteral vitamin B12 administration. An intradermal test dose is recommended before cyanocobalamin is administered to patients suspected of being sensitive to this drug.

This product contains benzyl alcohol. Benzyl alcohol has been reported to be associated with a fatal "Gasping Syndrome" in premature infants.

Doses of vitamin B12 exceeding 10 mcg daily may produce a hematologic response in patients who have a folate deficiency. Indiscriminate administration of vitamin B12 may mask the true diagnosis of pernicious anemia.

Vitamin B12 deficiency that is allowed to progress for longer than three months may produce permanent degenerative lesions of the spinal cord. Doses of folic acid greater than 0.1 mg per day may result in hematologic remission in patients with vitamin B12 deficiency. Neurologic manifestations will not be prevented with folic acid, and if not treated with vitamin B12, irreversible damage will result.

Patients with pernicious anemia have about three times the incidence of carcinoma of the stomach as the general population, so appropriate tests for this condition should be carried out when indicated.

Neomycin, colchicine, para-aminosalicylic acid, or excessive alcohol intake longer than two weeks may cause malabsorption of vitamin B12. Chloramphenicol and other drugs having bone marrow suppressant properties may cause a lack of therapeutic response to vitamin B12; this effect may be due to interference with erythrocyte maturation.

Long-term studies in animals to evaluate carcinogenic potential have not been done. There is no evidence from long-term use in patients with pernicious anemia that cyanocobalamin is carcinogenic. Pernicious anemia is associated with an increased incidence of carcinoma of the stomach, but this is believed to be related to the underlying pathology and not to treatment with cyanocobalamin.

Pregnancy Category C. Adequate and well-controlled studies have not been done in pregnant women. However, vitamin B12 is an essential vitamin and requirements are increased during pregnancy. Amounts of vitamin B12 that are recommended by the Food and Nutrition Board, National Academy of Science-National Research Council for pregnant women (4 mcg daily) should be consumed during pregnancy.

Vitamin B12 is known to be excreted in human milk. Amounts of vitamin B12 that are recommended by the Food and Nutrition Board, National Academy of Science-National Research Council for lactating women (4 mcg daily) should be consumed during lactation.

Vitamin B12 appears in the milk of nursing mothers in concentrations that approximate the mother’s vitamin B12 blood level.

Safety and effectiveness in pediatric patients has not been established.

Miscellaneous—feeling of swelling of entire body

No overdosage has been reported with this drug.

Rubramin PC (Cyanocobalamin Injection) should be visually inspected for particulate matter and color prior to administration; the solution is clear red.

Do not administer intravenously.

How is Rubramin PC Supplied

The syringes are supplied with sterile disposable 22-gauge, 1-1/4-inch needles.

Directions for Use of
UNIMATIC
® single dose syringe

2)
Holding syringe erect, aseptically remove the rubber cap from the tip of the syringe and attach the sterile, disposable needle using a push-twist action.

3)
Remove the needle guard, hold the syringe erect, and push plunger forward until a drop appears at tip of needle and all of the air is evacuated. Following the usual aspiration procedure complete the injection.

4)
Destroy the needle and syringe immediately after use.