The Poly Hist DHC brand name has been discontinued in the U.S. If generic versions of this product have been approved by the FDA, there may be generic equivalents available.

Dihydrocodeine is a semi-synthetic narcotic analgesic related to codeine, with multiple actions
qualitatively similar to those of codeine; the most prominent of these involve the central nervous
system and organs with smooth muscle components.

Phenylephrine HCl is a sympathomimetic, which acts predominately on alpha-receptors and has little
action on beta-receptors. It therefore functions as an oral nasal decongestant with minimal CNS
stimulation.

Pyrilamine Maleate is an antihistamine used in suppressing symptoms of allergic rhinitis. However, it
is more prone to cause drowsiness than some other antihistamines.

Poly Hist DHC Liquid is indicated to control cough and provide for temporary relief from
congestion associated with the upper respiratory tract.

General: Considerable caution should be exercised in patients with hypertension, diabetes mellitus,
ischemic heart disease, hyperthyroidism, increased intraocular pressure and prostatic hypertrophy.
The elderly (60 years and older) are more likely to exhibit adverse reactions. Antihistamines may
cause excitability, especially in children. At dosages higher than the recommended dose, nervousness,
dizziness, or sleeplessness may occur.

Usage in Ambulatory Patients: Dihydrocodeine may impair the mental and/or physical abilities
required for the performance of potentially hazardous tasks such as driving a car or operating machinery.

Respiratory Depression: Respiratory depression is the most dangerous acute reaction produced
by opioid agonist preparations, although it is rarely severe with usual doses. Opioids decrease the
respiratory rate, tidal volume, minute ventilation, and sensitivity to carbon dioxide. Respiratory
depression occurs most frequently in elderly more debilitated patients, usually after large initial doses
in non-tolerant patients, or when opioids are given in conjunction with other agents that depress
respiration. This combination product should be used with caution in patients with significant chronic
obstructive pulmonary disease or cor pulmonale and in patients with a substantially decreased
respiratory reserve, hypoxia hypercapnia, or respiratory depression.

Hypotensive Effect: Dihydrocodeine, like all opioid analgesics, may cause hypotension in patients
whose ability to maintain blood pressure has been compromised by a depleted blood volume or who
receive concurrent therapy with drugs such as phenothiazines or other agents which compromise
vasomotor tone. Poly Hist DHC Liquid may produce orthostatic hypotension in ambulatory patients.
This combination product should be administered with caution to patients in circulatory shock, since
vasodilation produced by the drug may further reduce cardiac output and blood pressure.

Dependence: Dihydrocodeine can produce drug dependence of the codeine type and has the
potential of being abused. This product should be prescribed and administered with the appropriate
degree of caution. (See Drug Abuse and Dependence section).

General: This combination product should be used with caution in elderly or debilitated patients
or those with any of the following conditions: adrenocortical insufficiency (e.g., Addison's disease);
asthma; central nervous system depression or coma; chronic obstructive pulmonary disease;
decreased respiratory reserve (including emphysema, severe obesity, cor pulmonale, or
kyphoscoliosis); delirium tremens; diabetes; head injury; hypotension; hypertension; increased
intracranial pressure; myxedema or hypothyroidism; prostatic hypertrophy or urethral stricture; and
toxic psychosis. The benefits and risks of opioids in patients taking monoamine oxidase inhibitors
and in those with a history of drug abuse should be carefully considered. This combination product
may aggravate convulsions in patients with convulsive disorders, and like all opioids, may induce or
aggravate seizures in some clinical settings.

Other Central Nervous System Depressants: Patients receiving other opioid analgesics,
sedatives or hypnotics, muscle relaxants, general anesthetics, centrally acting anti-emetics,
phenothiazines or other tranquilizers, or alcohol concomitantly with this combination product
may exhibit additive depressant effects on the central nervous system. When such combined
therapy is contemplated, the dose of one or both agents should be reduced. Concomitant use
of dihydrocodeine and antihistamines with alcohol and other CNS depressants may have an
additive effect.

Monoamine Oxidase Inhibitors: Dihydrocodeine, like all opioids, interact with monoamine
oxidase inhibitors causing central nervous system excitation and hypertension. MAO inhibitors
and beta-adrenergic blockers increase the effects of sympathomimetics. They may also prolong
and intensify the anticholinergic effects of antihistamines.

Patients should be advised that Poly Hist DHC Liquid is a potential drug of abuse. They
should protect if from theft, and it should never be given to anyone other than the individual
for whom it was prescribed.

Animal reproduction studies have not been conducted with Poly Hist DHC Liquid. It is also
not known whether this combination product can cause fetal harm when administered to
pregnant women or can affect reproduction capacity in males and females. This combination
product should be given to pregnant women only if clearly needed, especially during the first
trimester.

Babies born to mothers who have been taking opioids regularly prior to delivery will be
physically dependent. The withdrawal signs include irritability and excessive crying, tremors,
hyperactive reflexes, increased respiratory rate, increased stools, sneezing, yawning,
vomiting and fever. The intensity of the syndrome does not always correlate with the duration
of maternal opioid use or dose. There is no consensus on the best method of managing
withdrawal. Chlorpromazine 0.7-1.0 mg/kg q6h, phenobarbital 2 mg/kg q6h, and paregoric
24 drops/kg q4h, have been used to treat withdrawal symptoms in infants. The duration of
therapy is 4 to 28 days, with the dosages decreased as tolerated.

Poly Hist DHC Liquid is not recommended for use by women during and immediately
before labor and delivery because oral opioids may cause respiratory depression in the
newborn.

This product is not recommended for use in children under 6 years of age. Children under two
years may be more susceptible to the respiratory arrest, coma and death. Use of antihistamines
is not recommended in infants. This age group may be at a higher risk than other age groups
because of an increased susceptibility to anticholinergic effects, such as CNS excitation, and an
increased tendency toward convulsions. In older children taking antihistamines, a paradoxical
reaction characterized by hyperexcitability may occur. Very young children may be more sensitive
to the effects, especially the vasopressor effects of sympathomimetic amines.

Poly Hist DHC Liquid should be given with caution to the elderly.

Hepatic Impairment:
POLYHIST DHC Liquid should be given with caution to patients with hepatic insufficiency.
Since, dihydrocodeine is metabolized by the liver; the effects of this combination
product should be monitored closely in such patients.

Renal Impairment:
Poly Hist DHC Liquid should be used with caution and in reduced dosage in the
presence of impaired renal function.

Pancreatic/Biliary Tract Disease:
Opioids may cause spasms of the sphincter of Oddi and should be used with caution in
patients with biliary tract disease including pancreatitis.

This combination product is subject to the provisions of the Controlled Substance Act and
has been placed in Schedule III. Dihydrocodeine can produce drug dependence of the codeine
type and therefore has the potential of being abused. Psychological dependence, physical
dependence, and tolerance may develop upon repeated administration of dihydrocodeine, and
it should be prescribed and administered with the same degree of caution appropriate to the
use of other oral opioid medications. Symptoms of dihydrocodeine withdrawal consist of
irritability, restlessness, insomnia, diaphoresis, anxiety and palpitations.

An overdose of Poly Hist DHC Liquid is a potentially lethal poly-drug overdose situation,
and consultation with a regional Poison Control Center is recommended. A listing of the
poison control centers can be found in standard references such as the Physician's Desk
Reference®.

Signs and Symptoms: Symptoms of overdosage include pinpoint pupils, respiratory depression,
extreme somnolence progressing to stupor, loss of consciousness, or coma, skeletal muscle
flaccidity, cold and clammy skin and other symptoms common with narcotic overdosage.
Convulsions, cardiovascular collapse, and death may occur. A single case of acute
rhabdomyolysis associated with an overdose of dihydrocodeine has been reported.

Recommended Treatment: Immediate treatment of an overdosage of Poly Hist DHC
Liquid includes support of cardiorespiratory function and measures to reduce drug absorption.
Vomiting should be induced with syrup of ipecac, if the patient is alert and has adequate laryngeal
reflexes. Oral activated charcoal should follow. The first dose should be accompanied by an
appropriate cathartic. Gastric lavage may be necessary. Hypotension is usually hypovolemic and
should be treated with fluids. Endotracheal intubation and artificial respiration may be necessary.
The pure opioid antagonist naloxone or nalmefene is a specific antidote against respiratory depression
that results from opioid overdose. Opioid antagonists should not be given in the absence of clinically
significant respiratory or circulatory depression secondary to opioid overdose. They should be
administered cautiously to persons who are known, or suspected to be, physically dependent on any
opioid agonist including dihydrocodeine. In such cases, an abrupt or complete reversal of opioid
effects may precipitate an acute abstinence syndrome. The prescribing information for the specific
opioid antagonist should be consulted for details of their proper use.

*In mild cases or in particularly sensitive patients, less frequent or reduced doses
may be appropriate and adequate.


How is Poly Hist DHC Supplied

KEEP THIS AND ALL MEDICATIONS OUT OF THE REACH OF CHILDREN.
IN CASE OF ACCIDENTAL OVERDOSE, SEEK PROFESSIONAL ASSISTANCE
OR CONTACT A POISON CONTROL CENTER IMMEDIATELY.

Dispense in a tight, light-resistant container as defined in the USP/NF with a child-resistant closure.

This bottle not to be dispensed to consumer.

The packaging below represents the labeling currently used:

Principal Display Panel and Side Panel for 473mL Label:

*In mild cases or in particularly sensitive patients, less frequent or reduced doses may be
appropriate and adequate.

Refer to the attached package insert for full prescribing information.

KEEP THIS AND ALL MEDICATIONS OUT OF THE REACH OF CHILDREN.
IN CASE OF ACCIDENTAL OVERDOSE, SEEK PROFESSIONAL ASSISTANCE
OR CONTACT A POISON CONTROL CENTER IMMEDIATELY.

This bottle is not to be dispensed to consumer.

Dispense in a tight, light-resistant container with a child-resistant cap. 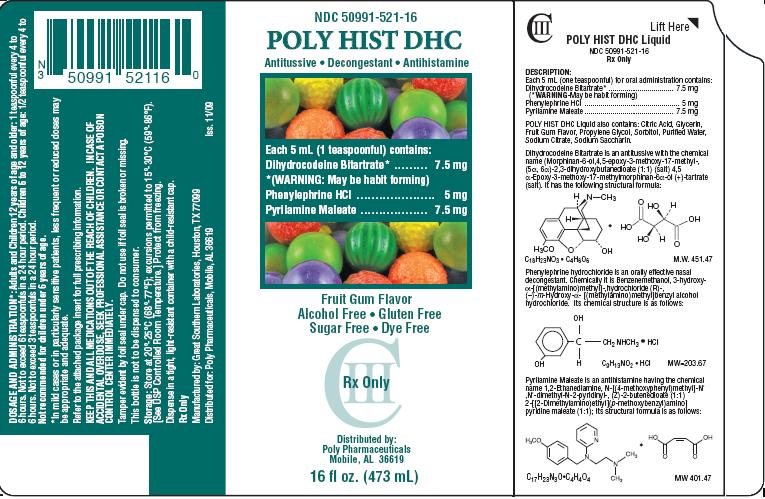 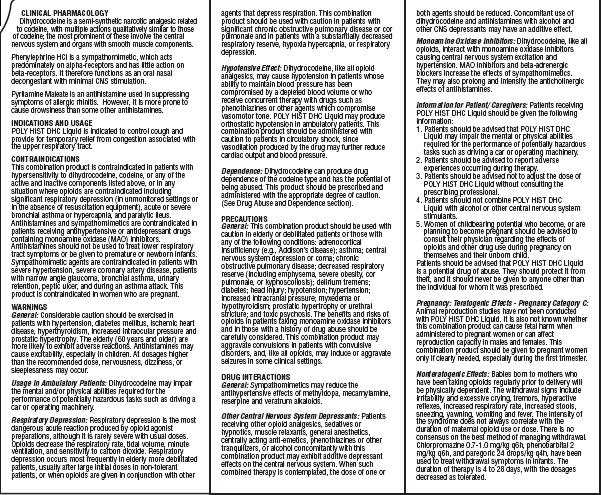 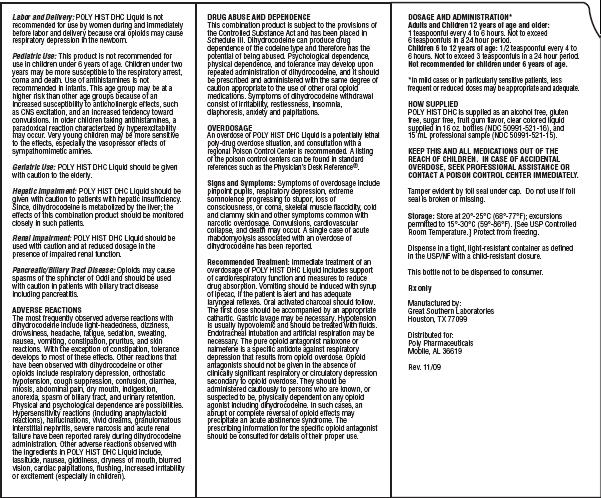