METHOXSALEN LOTION IS A POTENT TOPICAL DRUG. READ ENTIRE BROCHURE BEFORE PRESCRIBING OR USING THIS MEDICATION.

METHOXSALEN LOTION IS A POTENT DRUG CAPABLE OF PRODUCING SEVERE BURNS IF IMPROPERLY USED. IT SHOULD BE APPLIED ONLY BY A PHYSICIAN UNDER CONTROLLED CONDITIONS FOR LIGHT EXPOSURE AND SUBSEQUENT LIGHT SHIELDING. THIS PREPARATION SHOULD NEVER BE DISPENSED TO A PATIENT.

Oxsoralen Lotion is a clear, colorless to straw colored liquid with an odor of acetone. Each ml. of Oxsoralen Lotion contains 10 mg. methoxsalen in an inert vehicle containing alcohol (71% v/v), propylene glycol, acetone, and purified water.

The exact mechanism of action of methoxsalen with the epidermal melanocytes and keratinocytes is not known. Psoralens given orally are preferentially taken up by epidermal cells (Artuc et al, 1979)1. The best known biochemical reaction of methoxsalen is with DNA. Methoxsalen, upon photoactivation, conjugates and forms covalent bonds with DNA which leads to the formation of both monofunctional (addition to a single strand of DNA) and bifunctional adducts (crosslinking of psoralen to both strands of DNA) (Dall'Acqua et al, 1971)2. Reactions with proteins have also been described (Yoshikawa et al, 1979)3.

Methoxsalen acts as a photosensitizer. Topical application of this drug and subsequent exposure to UVA, whether artificial or sunlight, can cause cell injury. If sufficient cell injury occurs in the skin an inflammatory reaction will result. The most obvious manifestation of this reaction is delayed erythema which may not begin for several hours and may not peak for 2 to 3 days or longer. It is crucial to realize that the length of time the skin remains sensitized or when the maximum erythema will occur is quite variable from person to person. The erythematous reaction is followed over several days or weeks by repair which is manifested by increased melanization of the epidermis and thickening of the stratum corneum. The exact mechanics are unknown but it has been suggested that melanocytes in the hair follicles are stimulated to move up the follicle and to repopulate the epidermis. (Ortonne, et al, 1979)4

As a topical repigmenting agent in vitiligo in conjunction with controlled doses of ultraviolet A (320-400 nm) or sunlight.

SKIN BURNS
Serious skin burns from either UVA or sunlight (even through window glass) can result if recommended exposure schedule is exceeded and/or protective covering or sunscreens are not used. The blistering of the skin sometimes encountered after UV exposure generally heals without complication or scarring. (Farrington Daniels, Jr., M.D., personal communication). Suitable covering of the area of application or a topical sunblock should follow the therapeutic UVA exposure.
CARCINOGENICITY

Animal Studies. Topical methoxsalen has been reported to be a potent photocarcinogen in certain strains of mice. (Pathak et al 1959)5.
Human Studies. None of our clinical investigators reported skin cancer as a complication of topical treatment for vitiligo. However, it is recommended that caution be exercised when the patient is fair-skinned, has a history of prior coal tar UV treatment, or has had ionizing radiation or taken arsenical compounds. Such patients who subsequently have oral psoralen – UVA treatment (PUVA) are at increased risk for developing skin cancer.

A. This product should be applied only in small well-defined lesions and preferably on lesions which can be protected by clothing or a sunscreen from subsequent exposure to radiant UVA. If this product is used to treat vitiligo of face or hands, be very emphatic when instructing patient to keep the treated areas protected from light by use of protective clothing or sunscreening agents. The area of application may be highly photosensitive for several days and may result in severe burn injury if exposed to additional UV or sunlight.

Safety and effectiveness in children below the age of 12 years have not been established.

Systemic adverse reactions have not been reported. The most common adverse reaction is severe burns of the treated area from overexposure to UVA, including sunlight. TREATMENT MUST BE INDIVIDUALIZED. Minor blistering of the skin is not a contraindication to further treatment and generally heals without incident. Treatment would be the standard for burn therapy. Since 1953, many studies have demonstrated the safety and effectiveness of topical methoxsalen and UVA for the treatment of vitiligo when used as directed. (Lerner, A.B., et al, 1953)6 (Fitzpatrick, T.B., et al, 1966)7 (Fulton, James F. et al, 1969)8

This does not apply to topical usage. In the unlikely event that the lotion is ingested, standard procedures for poisoning should be followed, including gastric lavage. Protection from UVA or daylight for hours or days would also be necessary. The patient should be kept in a darkened room.

Oxsoralen Lotion is applied to a well-defined area of vitiligo by the physician and the area is then exposed to a suitable source of UVA. Initial exposure time should be conservative and not exceed that which is predicted to be one-half the minimal erythema dose. Treatment intervals should be regulated by the erythema response; generally once a week is recommended or less often depending on results. The hands and fingers of the person applying the medication should be protected by gloves or finger cots to avoid photosensitization and possible burns.

Pigmentation may begin after a few weeks but significant repigmentation may require 6 to 9 months of treatment. Periodic re-treatment may be necessary to retain all of the new pigment. Idiopathic vitiligo is reversible but not equally reversible in every patient. Treatment must be individualized. Repigmentation will vary in completeness, time of onset, and duration. Repigmentation occurs more rapidly in fleshy areas such as face, abdomen, and buttocks and less rapidly over less fleshy areas such as the dorsum of the hands or feet.

Pharmacist–to be dispensed
only to physicians, never to
patients. Dispense only with
full statement of warnings.

In a base of alcohol
71% V/V, propylene
glycol, acetone, and
purified water. 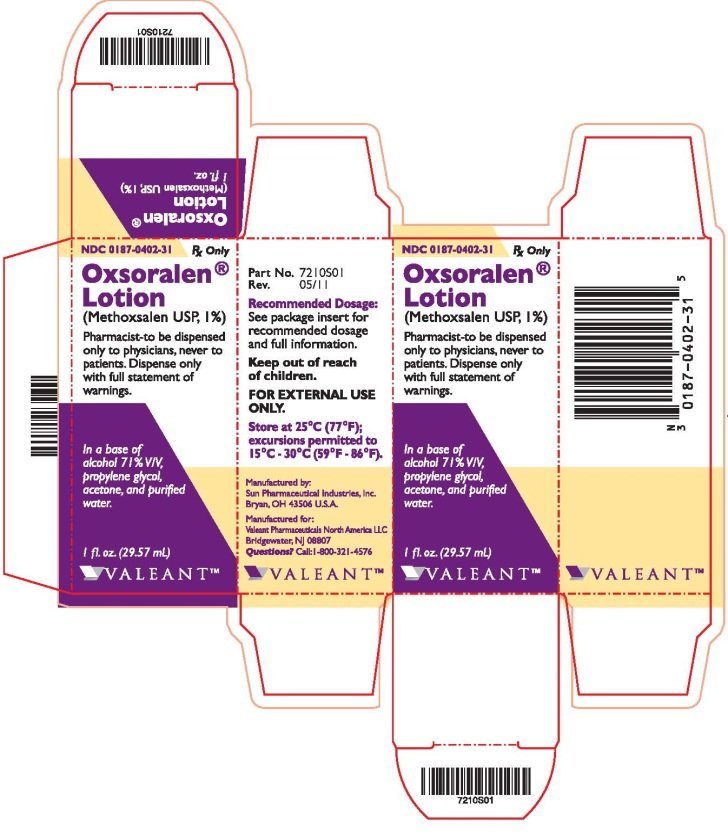