The following adverse reactions have been reported:

The Ontak brand name has been discontinued in the U.S. If generic versions of this product have been approved by the FDA, there may be generic equivalents available.

Indications and Usage for Ontak

Ontak® is indicated for the treatment of patients with persistent or recurrent cutaneous T-cell lymphoma whose malignant cells express the CD25 component of the IL-2 receptor [see Warnings and Precautions (5.4)].

For patients completing at least 4 courses of Ontak treatment in Study 1 [see Clinical Studies (14.1)], the incidence of infusion reactions was lower in the 3rd and 4th cycles as compared to the 1st and 2nd cycles of Ontak.

The onset of symptoms in patients with capillary leak syndrome may be delayed, occurring up to 2 weeks following infusion. Symptoms may persist or worsen after the cessation of Ontak.

Regularly assess patients for weight gain, new onset or worsening edema, hypotension (including orthostatic changes) and monitor serum albumin levels prior to the initiation of each course of therapy and more often as clinically indicated. Withhold Ontak for serum albumin levels of less than 3.0 g/dL [see Warnings and Precautions (5.5)].

Loss of visual acuity, usually with loss of color vision, with or without retinal pigment mottling has been reported following administration of Ontak. Recovery was reported in some of the affected patients; however, most patients reported persistent visual impairment.

Confirm that the patient's malignant cells express CD25 prior to administration of Ontak. A testing service for the assay of CD25 expression in tumor biopsy samples is available. For information on this service call 877-873-4724.

The following adverse reactions are discussed in greater detail in other sections of the label:

Hepatobiliary Disorders: Increase in serum alanine aminotransferase (ALT) or aspartate aminotransferase (AST) from baseline occurred in 84% of subjects treated with Ontak (197/234). In the majority of subjects, these enzyme elevations occurred during either the first or the second cycle; enzyme elevation resolved without medical intervention and did not require discontinuation of Ontak.

In Study 1 [see Clinical Studies (14.1)], of 95 patients treated with denileukin diftitox, 66% tested positive for antibodies at baseline probably due to a prior exposure to diphtheria toxin or its vaccine. After 1, 2, and 3 courses of treatment, 94%, 99%, and 100% of patients tested positive, respectively. Mean titers of anti-denileukin diftitox antibodies were similarly increased in the 9 and 18 mcg/kg/day dose groups after 2 courses of treatment. Meanwhile, pharmacokinetic parameters decreased substantially (Cmax~57%, AUC~80%), and clearance increased 2- to 8-fold.

The following adverse reactions have been identified during postapproval use of Ontak. Because these reactions are reported voluntarily from a population of uncertain size, it is not always possible to reliably estimate their frequency or establish a causal relationship to drug exposure.

No formal drug-drug interaction studies have been conducted with Ontak.

Clinical studies of Ontak did not include sufficient numbers of subjects aged 65 and older to determine whether they respond differently from younger subjects.

Ontak (denileukin diftitox), is a recombinant DNA-derived cytotoxic protein composed of the amino acid sequences for diphtheria toxin fragments A and B (Met1-Thr387)-His and the sequences for human interleukin-2 (IL-2; Ala1-Thr133). It is produced in an E. coli expression system and has a molecular weight of 58 kD. Neomycin is used in the fermentation process but is undetectable in the final product. Ontak is supplied in single use vials as a sterile, frozen solution intended for intravenous (IV) administration. Each 2 mL vial of Ontak contains 300 mcg of recombinant denileukin diftitox in a sterile solution of citric acid (20 mM), EDTA (0.05 mM) and polysorbate 20 (<1%) in Water for Injection, USP. The solution has a pH range of 6.9 to 7.2.

Denileukin diftitox is a fusion protein designed to direct the cytocidal action of diphtheria toxin to cells which express the IL-2 receptor. Ex vivo studies report that after binding to the IL-2 receptor on the cell surface, denileukin diftitox is internalized by receptor-mediated endocytosis. The fusion protein is subsequently cleaved, releasing diphtheria toxin enzymatic and translocation domains from the IL-2 fragment, resulting in the inhibition of protein synthesis and ultimately, cell death.

The safety and efficacy of Ontak were evaluated in a randomized, double-blind, placebo-controlled, 3-arm trial in patients with Stage Ia to III CD25(+) CTCL. Eligible patients were required to have expression of CD25 on ≥ 20% of biopsied malignant cells by immunohistochemistry [see Warnings and Precautions (5.4)]. Patients were randomized to receive 0, 9 or 18 mcg/kg/day Ontak via intravenous infusion days 1-5 of each 21-day cycle, for up to 8 cycles. Randomization was stratified by disease stage (≤IIa vs. ≥IIb). The main efficacy outcome was objective response rate (ORR), using a Weighted Skin Severity Index, in conjunction with assessment of lymph node involvement and percentage of abnormal blood lymphocytes. A total of 144 patients were randomized: 44 patients to placebo, 45 patients to 9 mcg/kg/day Ontak and 55 patients to 18 mcg/kg/day Ontak. Randomization for the study was carried out at 1:1:1 for the first 73 patients, 4:1:4 for the next 31 patients, and 1:4:4 for the remaining 40 patients. The median age of patients was 59 years (range 23 to 84 years); 34% were ≥ 65 years. Fifty-five percent were men and 86% were Caucasian. Sixty-seven percent had early stage disease (≤ IIa). Patients had received a median of 2 anti-CTCL therapies (range 0 to 6) prior to study entry. Results for objective response rate (ORR) and progression-free survival (PFS) are shown in the table below.

A randomized, double-blind study was conducted to evaluate doses of 9 or 18 mcg/kg/day in 71 patients with recurrent or persistent, Stage Ib to IVa CTCL. Entry to this study required demonstration of CD25 expression on at least 20% of the cells in any relevant tumor tissue sample (skin biopsy) or circulating cells. Tumor biopsies were not evaluated for expression of other IL-2 receptor subunit components (CD122/CD132). Ontak was administered as an IV infusion daily for 5 days every 3 weeks. Patients received a median of 6 courses of Ontak therapy (range 1 to 11). The study population had received a median of 5 prior therapies (range 1 to 12) with 63% of patients entering the trial with Stage IIb or more advanced stage disease. The median age of patients was 64 years (range 26 to 91 years); 49% were ≥ 65 years. Fifty-two percent were men and 75% were Caucasian.

Overall, 30% (95% CI: 18-41%) of patients treated with Ontak experienced an objective tumor response (50% reduction in tumor burden which was sustained for ≥6 weeks; Table 3). Seven patients (10%) achieved a complete response and 14 patients (20%) achieved a partial response. The overall median duration of response, measured from first day of response, was 4 months with a median duration for complete response of 9 months and for partial response of 4 months. 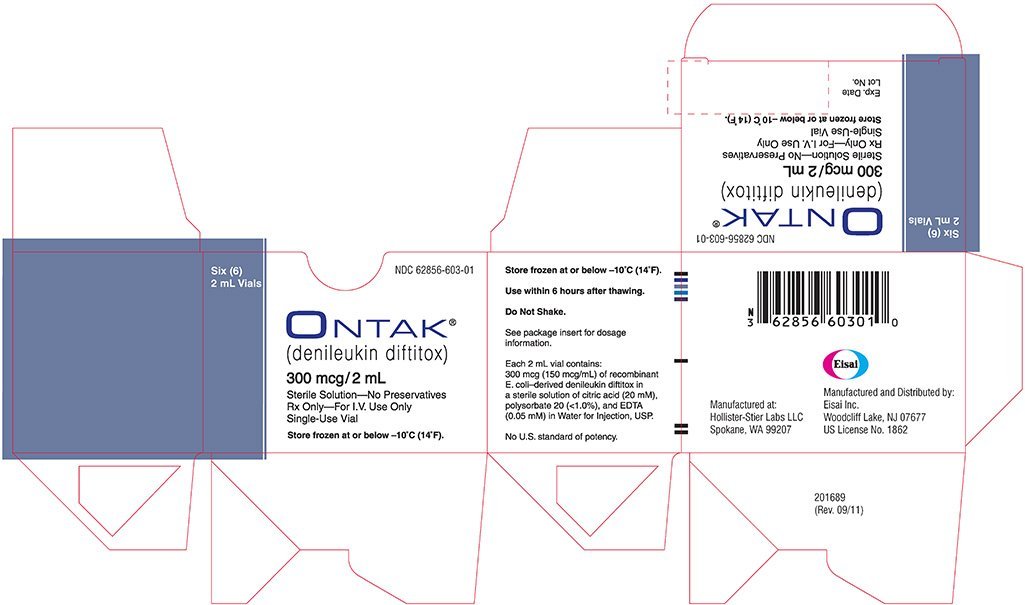