SYSTEMIC ABSORPTION OF NEOMYCIN OCCURS FOLLOWING ORAL ADMINISTRATION AND TOXIC REACTIONS MAY OCCUR. Patients treated with neomycin should be under close clinical observation because of the potential toxicity associated with their use.

NEUROTOXICITY (INCLUDING OTOTOXICITY) AND NEPHROTOXICITY FOLLOWING THE ORAL USE OF NEOMYCIN SULFATE HAVE BEEN REPORTED, EVEN WHEN USED IN RECOMMENDED DOSES. THE POTENTIAL FOR NEPHROTOXICITY, PERMANENT BILATERAL AUDITORY OTOTOXICITY AND SOMETIMES VESTIBULAR TOXICITY IS PRESENT IN PATIENTS WITH NORMAL RENAL FUNCTION WHEN TREATED WITH HIGHER DOSES OF NEOMYCIN AND/OR FOR LONGER PERIODS THAN RECOMMENDED. Serial, vestibular, and audiometric tests, as well as tests of renal function, should be performed (especially in high risk patients).

THE RISK OF NEPHROTOXICITY AND OTOTOXICITY IS GREATER IN PATIENTS WITH IMPAIRED RENAL FUNCTION. Ototoxicity is often delayed in onset and patients developing cochlear damage will not have symptoms during therapy to warn them of developing eighth nerve destruction and total or partial deafness may occur long after neomycin has been discontinued.

Neuromuscular blockage and respiratory paralysis have been reported following the oral use of neomycin. The possibility of the occurrence of neuro-muscular blockage and respiratory paralysis should be considered if neomycin is administered, especially to patients receiving anesthetics, neuro-muscular blocking agents such as tubocurarine, succinylcholine, decamethonium, or in patients receiving massive transfusions of citrate anticoagulated blood. If blockage occurs, calcium salts may reverse these phenomena but mechanical respiratory assistance may be necessary.

Concurrent and/or sequential systemic, oral, or topical use of other aminoglycosides including paromomycin and other potentially nephrotoxic and/or neurotoxic drugs such as bacitracin, cisplatin, vancomycin, amphotericin B, polymyxin B, colistin, and viomycin should be avoided because the toxicity may be additive.

Other factors which increase the risk of toxicity are advanced age and dehydration.

The concurrent use of neomycin with potent diuretics such as ethacrynic acid or furosemide should be avoided since certain diuretics by themselves may cause ototoxicity. In addition, when administered intravenously, diuretics may enhance neomycin toxicity by altering the antibiotic concentration in serum and tissue.

The Neo-Fradin brand name has been discontinued in the U.S. If generic versions of this product have been approved by the FDA, there may be generic equivalents available.

Neomycin B is identical except that the -α-D-glucopyranosyl residue in the neobiosamine moiety is β-L-idopyranosly.

The molecular weight of Neomycin is 614.67. The structural formula is represented below: 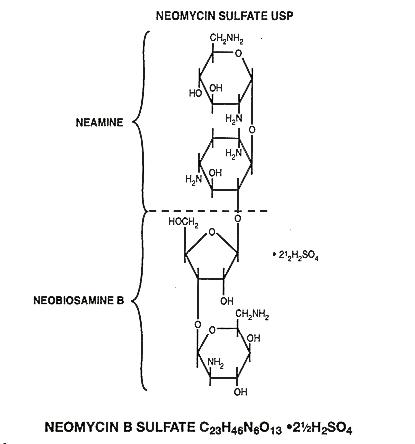 Neomycin sulfate is poorly absorbed from the gastrointestinal tract. The small absorbed fraction is rapidly distributed in the tissues and is excreted by the kidney in keeping with the degree of kidney function. The unabsorbed portion of the drug (approximately 97 percent) is eliminated unchanged in the feces.

As with other aminoglycosides, the amount of systemically absorbed neomycin transferred to the tissues increases cumulatively with each repeated dose administered until a steady state is achieved. The kidney functions as the primary excretory path as well as the tissue binding site with the highest concentration found in renal cortex. With repeated dosings, progressive accumulation also occurs in the inner ear. Release of tissue bound neomycin occurs slowly over a period of several weeks after dosing has been discontinued.

Protein binding studies have shown that the degree of aminoglycoside protein binding is low and, depending upon the methods used for testing, this may be between 0 and 30 percent.

In vitro tests have demonstrated that neomycin is bactericidal and acts by inhibiting the synthesis of protein in susceptible bacterial cells. It is effective primarily against gram-negative bacilli but does have some activity against gram-positive organisms. Neomycin is active in vitro against Escherichia coli and the Klebsiella-Enterobacter group. Neomycin is not active against anaerobic bowel flora.

Indications and Usage for Neo-Fradin

Neomycin sulfate has been shown to be effective adjunctive therapy in hepatic coma by reduction of the ammonia forming bacteria in the intestinal tract. The subsequent reduction in blood ammonia has resulted in neurologic improvement.

To reduce the development of drug-resistant bacteria and maintain the effectiveness of Neomycin Sulfate Oral Solution and other antibacterial drugs, Neomycin Sulfate Oral Solution should be used only to treat or prevent infections that are proven or strongly suspected to be caused by susceptible bacteria. When culture and susceptibility information are available, they should be considered in selecting or modifying antibacterial therapy. In the absence of such data, local epidemiology and susceptibility patterns may contribute to the empiric selection of therapy.

Neomycin sulfate oral preparations are contraindicated in the presence of intestinal obstruction and in individuals with a history of hypersensitivity to the drug.

Patients with a history of hypersensitivity or serious toxic reaction to other aminoglycosides may have a cross-sensitivity to neomycin.

Neomycin sulfate oral solution is contraindicated in patients with inflammatory or ulcerative gastrointestinal disease because of the potential for enhanced gastrointestinal absorption of neomycin.

Additional manifestations of neurotoxicity may include numbness, skin tingling, muscle twitching, and convulsions.

The risk of hearing loss continues after drug withdrawal.

Aminoglycosides can cause fetal harm when administered to a pregnant woman.

Aminoglycoside antibiotics cross the placenta and there have been several reports of total irreversible bilateral congenital deafness in children whose mothers received streptomycin during pregnancy. Although serious side effects to fetus or newborn have not been reported in the treatment of pregnant women with other aminoglycosides, the potential for harm exists. Animal reproduction studies of neomycin have not been conducted. If neomycin is used during pregnancy, or if the patient becomes pregnant while taking this drug, the patient should be apprised of the potential hazard to the fetus.

Prescribing Neomycin Sulfate Oral Solution in the absence of a proven or strongly suspected bacterial infection or a prophylactic indication is unlikely to provide benefit to the patient and increases the risk of the development of drug-resistant bacteria.

As with other antibiotics, use of oral neomycin may result in overgrowth of non-susceptible organisms, particularly fungi. If this occurs, appropriate therapy should be instituted.

Neomycin is quickly and almost totally absorbed from body surfaces (except the urinary bladder) after local irrigation and when applied topically in association with surgical procedures. Delayed-onset, irreversible deafness, renal failure, and death due to neuromuscular blockade (regardless of the status of renal function) have been reported following irrigation of both small and large surgical fields with minute quantities of neomycin.

Cross-allergenicity among aminoglycosides has been demonstrated.

Aminoglycosides should be used with caution in patients with muscular disorders such as myasthenia gravis or parkinsonism since these drugs may aggravate muscle weakness because of their potential curare-like effect on the neuromuscular junction.

There have been many reports in the literature of nephrotoxicity and/or ototoxicity with the oral use of neomycin. If renal insufficiency develops during oral therapy, consideration should be given to reducing the drug dosage or discontinuing therapy.

An oral neomycin dose of 12 grams per day produces a malabsorption syndrome for a variety of substances including fat, nitrogen, cholesterol, carotene, glucose, xylose, lactose, sodium, calcium, cyanocobalamin and iron.

Patients with renal insufficiency may develop toxic neomycin blood levels unless doses are properly regulated. If renal insufficiency develops during treatment, the dosage should be reduced or the antibiotic discontinued. To avoid nephrotoxicity and eighth nerve damage associated with high doses and prolonged treatment, the following should be performed prior to and periodically during therapy: urinalysis for increased excretion of protein, decreased specific gravity, casts and cells; renal function tests such as serum creatinine, BUN or creatinine clearance; tests of the vestibulocochlearis nerve (eighth cranial nerve) function.

Serial, vestibular and audiometric tests should be performed (especially in high risk patients). Since elderly patients may have reduced renal function which may not be evident in the results of routine screening tests such as BUN or serum creatinine, a creatinine clearance determination may be more useful.

Caution should be taken in concurrent or serial use of other neurotoxic and/or nephrotoxic drugs because of possible enhancement of the nephrotoxicity and/or ototoxicity of neomycin (see boxed WARNINGS ).

Caution should also be taken in concurrent or serial use of other aminoglycosides and polymyxins because they may enhance neomycin's nephrotoxicity and/or ototoxicity and potentiate neomycin's neuromuscular blocking effects.

Oral neomycin may enhance the effect of coumarin in anticoagulants by decreasing vitamin K availability.

No long-term animal studies have been performed with neomycin to evaluate carcinogenic or mutagenic potential or impairment of fertility.

It is not known whether neomycin is excreted in human milk but it has been shown to be excreted in cow milk following a single intramuscular injection. Other aminoglycosides have been shown to be excreted in human milk. Because of the potential for serious adverse reactions from the aminoglycosides in nursing infants, a decision should be made whether to discontinue nursing or to discontinue the drug, taking into account the importance of the drug to the mother.

Before administering the drug, patients or members of their families should be informed of possible toxic effects of the eighth nerve. The possibility of acute toxicity increases in premature infants and neonates.

The most common adverse reactions to oral neomycin are nausea, vomiting, and diarrhea. The "Malabsorption Syndrome" characterized by increased fecal fat, decreased serum carotene and fall in xylose absorption has been reported with prolonged therapy. Nephrotoxicity, ototoxicity, and neuromuscular blockage have been reported (see boxed WARNINGS and PRECAUTIONS section).

Because of low absorption, it is unlikely that acute overdosage would occur with oral neomycin. However, prolonged administration could result in sufficient systemic drug levels to produce neurotoxicity, ototoxicity, and/or nephrotoxicity.

Hemodialysis will remove neomycin from the blood.

To minimize the risk of toxicity use the lowest possible dose and the shortest possible treatment period to control the condition. Treatment for periods longer than two weeks is not recommended.

For use as an adjunct in the management of hepatic coma, the recommended dose is 4 to 12 grams per day given in the following regimen:

Neo-Fradin Oral Solution is available as a clear orange solution with a cherry flavor in 16 fl. oz bottle containing 125 mg of neomycin sulfate (equivalent to 87.5 mg of neomycin) per five mL.