The LoHist-PD brand name has been discontinued in the U.S. If generic versions of this product have been approved by the FDA, there may be generic equivalents available.

Brompheniramine Maleate is an antihistamine with the chemical name 2-Pyridinepropanamine, γ-(4-bromophenyl)-N,N-dimethyl-, (±)-, (Z) -2-butenedioate (1:1). Its structure is as follows:

Pseudoephedrine Hydrochloride is a nasal decongestant with the chemical name:

Brompheniramine maleate is a histamine antagonist, specifically an H1-receptor-blocking agent belonging to the alkylamine class of antihistamines. Antihistamines appear to compete with histamine for receptor sites on effector cells. Brompheniramine also has anticholinergic (drying) and sedative effects. Among the antihistaminic effects, it antagonizes the allergic response (vasodilatation, increased vascular permeability, increased mucus secretion) of nasal tissue. Brompheniramine is well absorbed from the gastrointestinal tract, with peak plasma concentration after single, oral doses of 4 mg reached in 5 hours; urinary excretion is the major route of elimination, mostly as products of biodegradation; the liver is assumed to be the main site of metabolic transformation.

Indications and Usage for LoHist PD

LoHist PD is indicated for the temporary relief of nasal congestion and pressure, runny nose, sneezing, itching of the nose or throat, and itchy watery eyes, due to hay fever, or other upper respiratory allergies (allergic rhinitis).

LoHist PD is contraindicated in patients with hypersensitivity or idiosyncrasy to any of its ingredients, patients taking monoamine oxidase (MAO) inhibitors or for two weeks after stopping the MAOI drug (see PRECAUTIONS, Drug Interactions section), patients with narrow-angle glaucoma, urinary retention, peptic ulcer, severe hypertension, severe coronary artery disease, patients with breathing problems such as emphysema or chronic bronchitis, or nursing mothers. Antihistamines should not be used to treat lower respiratory tract conditions including asthma.

Antihistamines may impair mental and physical abilities required for the performance of potentially hazardous tasks, such as driving a vehicle or operating machinery, and may impair mental alertness in children. In the young child, they may produce excitation.

Antihistamines may cause drowsiness and ambulatory patients who operate machinery or motor vehicles should be cautioned accordingly.

MAO inhibitors and beta adrenergic blockers increase the effect of sympathomimetics. Sympathomimetics may reduce the antihypertensive effects of methyldopa, mecamylamine, reserpine and veratrum alkaloids. Concomitant use of antihistamines with alcohol, tricyclic antidepressants, barbiturates and other CNS depressants may have an additive effect.

No information is available as to specific results of an overdose of LoHist PD. The signs, symptoms and treatment described below are those of H1 antihistamines, and ephedrine overdose.

Symptoms: Should antihistamine effects predominate, central action constitutes the greatest danger. In the small child, symptoms include excitation, hallucination, ataxia, incoordination, tremors, flushed face and fever. Convulsions, fixed and dilated pupils, coma and death may occur in severe cases. In the adult, fever and flushing are uncommon; excitement leading to convulsion and postictal depression is often preceded by drowsiness and coma. Respiration is usually not seriously depressed; blood pressure is usually stable.

Treatment: The stomach should be emptied promptly by emetics and/or gastric lavage. The installation of activated charcoal also should be considered. Cardiac function and serum electrolytes should be monitored and treatment initiated if indicated. If convulsions or marked CNS excitement occurs, diazepam may be used.

How is LoHist PD Supplied

KEEP THIS AND ALL MEDICATIONS OUT OF THE REACH OF CHILDREN. IN CASE OF ACCIDENTAL OVERDOSAGE, CONTACT A POISON CONTROL CENTER AND SEEK PROFESSIONAL ASSISTANCE IMMEDIATELY. 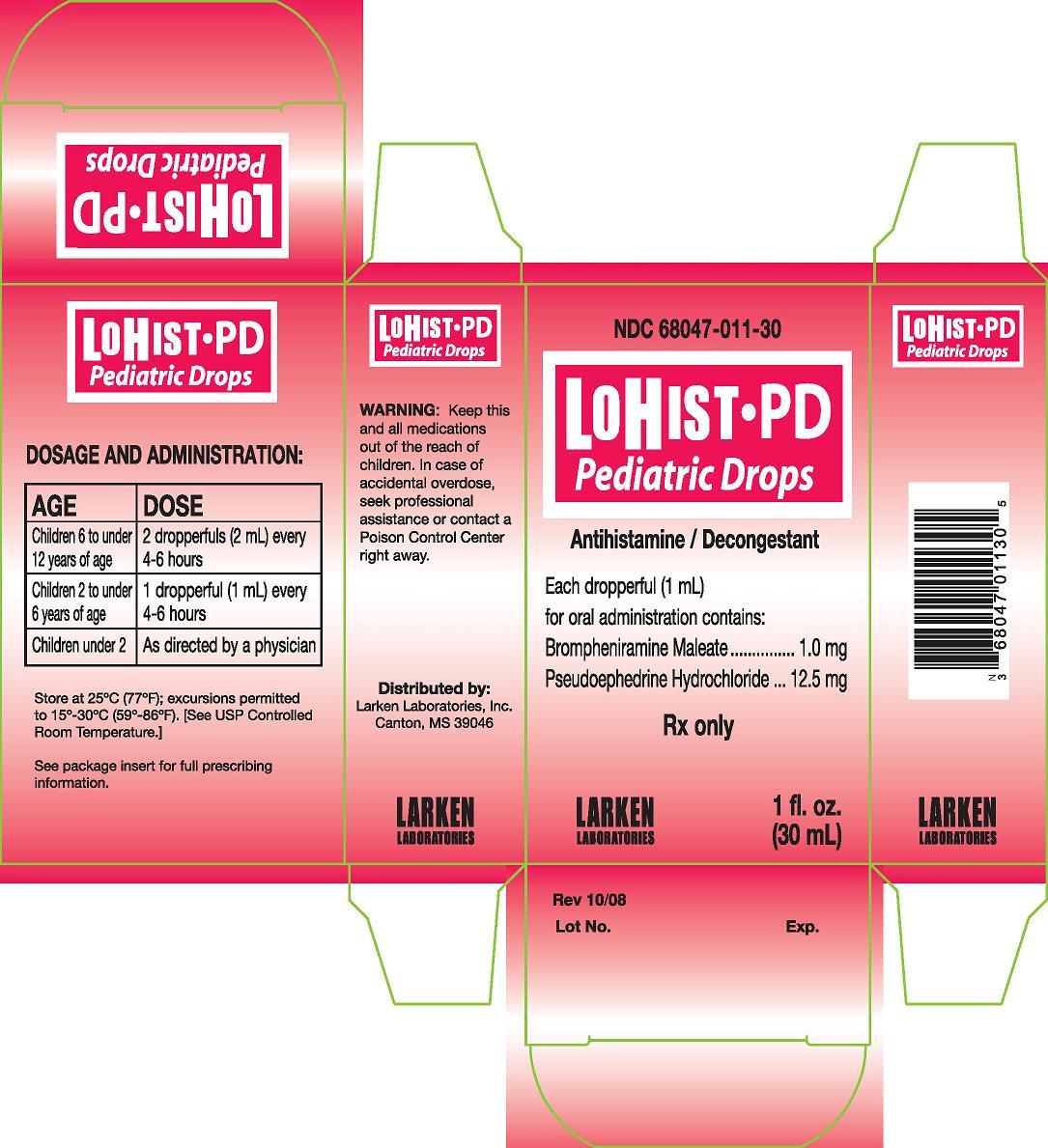