The Kemstro brand name has been discontinued in the U.S. If generic versions of this product have been approved by the FDA, there may be generic equivalents available.

Kemstro™ (baclofen orally disintegrating tablets) is a muscle relaxant and antispastic. Baclofen USP is a white to off-white, odorless or practically odorless crystalline powder. It is slightly soluble in water, very slightly soluble in methanol, and insoluble in chloroform. Its chemical name is 4-amino-3-(4-chlorophenyl)-butanoic acid. The molecular weight of baclofen is 213.66 and the empirical formula is C10H12CINO2. The structural formula is represented below: 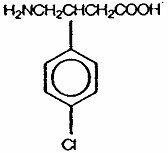 The precise mechanism of action of baclofen is not fully known. Baclofen is capable of inhibiting both monosynaptic and polysynaptic reflexes at the spinal level, possibly by hyperpolarization of afferent terminals, although actions at supraspinal sites may also occur and contribute to its clinical effect. Although baclofen is an analog of the putative inhibitory neurotransmitter gamma-amino-butyric acid (GABA), there is no conclusive evidence that actions on GABA systems are involved in the production of its clinical effects. In studies with animals, baclofen has been shown to have general CNS depressant properties as indicated by the production of sedation with tolerance, somnolence, ataxia, and respiratory and cardiovascular depression.

Baclofen is rapidly and extensively absorbed. Absorption may be dose-dependent, being reduced with increasing doses. Kemstro™ given with or without water is bioequivalent to the baclofen conventional tablet. Thus Kemstro™ can be placed on the tongue until it disintegrates and then be swallowed with or without water. Following a single 20 mg oral dose of Kemstro™, the peak plasma concentration was reached about 1½ hours after administration.

The apparent volume of distribution is 59 liters. Baclofen does not readily cross the blood-brain barrier. Plasma protein binding is approximately 30%.

In a study using radiolabeled baclofen, approximately 85% of the dose was excreted unchanged in the urine and feces. About 15% of the dose was metabolized, primarily by deamination. The γ-hydroxy metabolite, 3-(p-chlorophenyl)-4-hydroxybutyric acid, is formed after deamination of baclofen.

Kemstro™ is useful for the alleviation of signs and symptoms of spasticity resulting from multiple sclerosis, particularly for the relief of flexor spasms and concomitant pain, clonus, and muscular rigidity.

Patients should have reversible spasticity so that treatment with Kemstro™ will aid in restoring residual function.

Kemstro™ may also be of some value in patients with spinal cord injuries and other spinal cord diseases.

Kemstro™ is not indicated in the treatment of skeletal muscle spasm resulting from rheumatic disorders.

The efficacy of Kemstro™ in stroke, cerebral palsy, and Parkinson's disease has not been established and, therefore, it is not recommended for these conditions.

Kemstro™ is contraindicated in patients who are hypersensitive to any component of this product.

Hallucinations and seizures have occurred on abrupt withdrawal of baclofen. Therefore, except for serious adverse reactions, the dose should be reduced slowly when the drug is discontinued.

Because baclofen is primarily excreted unchanged by the kidneys, it should be given with caution and it may be necessary to reduce the dosage in patients with impaired renal function.

Baclofen has not significantly benefited patients with stroke. These patients have also shown poor tolerability to the drug.

In patients with epilepsy, the clinical state and electroencephalogram should be monitored at regular intervals, since deterioration in seizure control and EEG have been reported occasionally in patients taking baclofen.

Because of the possibility of sedation, patients should be cautioned regarding the operation of automobiles or other dangerous machinery, and activities made hazardous by decreased alertness. Patients should also be cautioned that the central nervous system depressant effects of baclofen may be additive to those of alcohol and other CNS depressants.

The central nervous system depressant effects of baclofen may be additive to those of alcohol and other CNS depressants.

A dose-related increase in incidence of ovarian cysts and a less marked increase in enlarged and/or hemorrhagic adrenal glands was observed in female rats treated chronically with baclofen.

Ovarian cysts have been found by palpation in about 4% of the multiple sclerosis patients that were treated with baclofen for up to one year. In most cases these cysts disappeared spontaneously while patients continued to receive the drug. Ovarian cysts are estimated to occur spontaneously in approximately 1% to 5% of the normal female population.

Clinical studies of baclofen did not include sufficient numbers of subjects aged 65 and over to determine whether they respond differently from younger subjects. In general, dose selection for an elderly patient should be cautious, usually starting at the low end of the dosing range, reflecting the greater frequency of decreased hepatic, renal, or cardiac function, and of concomitant disease or other drug therapy.

Sedating drugs may cause confusion and over-sedation in the elderly; elderly patients generally should be started on low doses of Kemstro™ and observed closely.

The most common adverse reaction during treatment with baclofen is transient drowsiness (10-63%). In one controlled study of 175 patients, transient drowsiness was observed in 63% of those receiving baclofen tablets compared to 36% of those in the placebo group. Other common adverse reactions are dizziness (5-15%), weakness (5-15%) and fatigue (2-4%). Others reported:

Some of the CNS and genitourinary symptoms may be related to the underlying disease rather than to drug therapy. The following laboratory tests have been found to be abnormal in a few patients receiving baclofen: increased SGOT, elevated alkaline phosphatase, and elevation of blood sugar.

The adverse experience profile seen with Kemstro™ was similar to that seen with baclofen tablets.

In the alert patient, empty the stomach promptly by induced emesis followed by lavage. In the obtunded patient, secure the airway with a cuffed endotracheal tube before beginning lavage (do not induce emesis). Maintain adequate respiratory exchange, do not use respiratory stimulants. It is unknown what effect hemodialysis or peritoneal dialysis has on the serum concentration of baclofen.

The determination of optimal dosage requires individual titration. Start therapy at a low dosage and increase gradually until optimum effect is achieved (usually between 40-80 mg daily).

Thereafter additional increases may be necessary but the total daily dose should not exceed a maximum of 80 mg daily (20 mg four times a day).

The lowest dose compatible with an optimal response is recommended. If benefits are not evident after a reasonable trial period, patients should be slowly withdrawn from the drug (see WARNINGS, Abrupt Drug Withdrawal).

Using dry hands, the patient should be instructed to place the tablet on the tongue, where it will disintegrate and can then be swallowed with or without water.

Because baclofen is primarily excreted unchanged by the kidneys, it should be given with caution and it may be necessary to reduce the dosage in patients with impaired renal function.

Kemstro™ (baclofen orally disintegrating tablets) 10 mg are white, round, orange-flavored, scored and engraved “10” on the unscored side and “SP” above and “351” below the score on the other side. They are supplied as follows:

Kemstro™ (baclofen orally disintegrating tablets) 20 mg are white, round, orange-flavored, scored and engraved “20” on the unscored side and “SP” above and “352” below the score on the other side. They are supplied as follows:

Dispense in a tight container as defined in the USP/NF with a child-resistant closure.