Indications and Usage for Gintuit

Gintuit (Allogeneic Cultured Keratinocytes and Fibroblasts in Bovine Collagen) is an allogeneic cellularized scaffold product indicated for topical (non-submerged) application to a surgically created vascular wound bed in the treatment of mucogingival conditions in adults.

Gintuit is not intended to provide root coverage.

For topical application in the oral cavity only

For single patient use only.

Gintuit is used as one application over a surgically created vascular wound bed in the oral cavity. The size of Gintuit is adjusted for the size of the wound bed.

The safety and efficacy of repeat application(s) of Gintuit have not been established.

Preparation of the Surgical Site

Gintuit is stored on a semi-permeable polycarbonate base within a plastic insert, which separates the product from an agarose gel medium in a sterile transparent shipping tray.

There is a potential for hypersensitivity reactions to occur with Gintuit.

Monitor for both early and later signs of hypersensitivity reaction following Gintuit application. Evaluate and treat signs and symptoms of potential allergic reactions according to standard practice. If necessary, remove Gintuit as part of the treatment for the allergic reaction.

The safety of this product for oral administration has not been evaluated beyond six months. The long-term potential for oral mucosal cancers to arise from, or in response to, this product is unknown.

Transmission of infectious diseases by known or unknown infectious agents may occur with Gintuit.

Product manufacture also includes reagents derived from animal materials, including bovine pituitary extract (BPE). All animal-derived reagents are tested for viruses, retroviruses, bacteria, fungi, yeast, and mycoplasma before use. Bovine materials are sourced to minimize bovine spongiform encephalopathy (BSE), the cause of a rare fatal condition in humans called variant Creutzfeldt-Jakob disease (vCJD). vCJD has never been attributed to use of any medical product manufactured with BPE, but the theoretical possibility cannot be dismissed.

These measures do not totally eliminate the risk of transmitting these or other transmissible infectious diseases and disease agents. Report the occurrence of a transmitted infection to Organogenesis Inc. at 1-888-943-8235.

Gintuit is shipped after passing primary test results from in-process microbial tests. A final sterility test is initiated prior to shipping, but the result will not be available for up to 14 days. If microbial contamination is detected after the product has been shipped, Organogenesis will notify health care providers and recommend appropriate actions.

In Studies One and Two, local (occurring at the site of Gintuit application) adverse reactions included gingival pain, gingival injury (due to inadvertent failure to remove a polycarbonate base from Gintuit before application), and ulceration.

In another study (n=15), in which the placement of Gintuit was under a mucosal flap, local (occurring at the site of Gintuit application) adverse reactions included impaired healing and suture-related complications.

The safety of Gintuit beyond six months was not evaluated in the clinical trials.

Gintuit is manufactured using a similar process as Apligraf, an FDA-approved medical device. Localized allergic reaction, skin inflammation and erosion, skin blistering, localized wound infection, and cellulitis have been reported during post-approval use of Apligraf for the treatment of chronic cutaneous wounds. Because these reactions are reported voluntarily by a population of uncertain size, and because there are no controls, it is not possible to determine their frequency in the exposed population or establish a causal relationship to exposure to Apligraf. It is uncertain whether information obtained from the postmarketing safety database from use of Apligraf in chronic cutaneous wounds can be extrapolated to use of Gintuit in the oral environment.

Exposure to topical antiseptics, such as povidone-iodine solution and chlorhexidine (concentrations greater than 0.12%), has been shown to degrade Gintuit during in vitro and in vivo histological studies.

If cytotoxic topical antiseptics or antibiotics, including those listed above, have been used, then irrigate the wound thoroughly with saline and allow a suitable wash-out period to elapse before applying Gintuit.

The safety and efficacy of Gintuit in infants and children have not been established.

Clinical studies of Gintuit did not include sufficient numbers of subjects aged 65 years and older to determine whether they respond differently than younger subjects.

The active ingredients of Gintuit are the allogeneic keratinocytes, allogeneic dermal fibroblasts, and bovine Type I collagen. In vitro studies have shown that Gintuit secretes human growth factors and cytokines, and contains extracellular matrix proteins. Growth factors, cytokines, and extracellular matrix proteins are known to be involved in wound repair and regeneration.

The cells are isolated from donated human newborn foreskin tissue and are multiplied into cell banks used in large-scale manufacturing. The donor’s mother is tested and found negative for human pathogens, and the cell banks are extensively tested for microbiological safety [See Warnings and Precautions (5.4)].

A final sterility test is initiated prior to shipping, but the result will not be available for up to 14 days. Passing results from in-process microbial tests are required for release of Gintuit for shipping.

Gintuit does not function as a tissue graft.

The mechanism of action by which Gintuit increases keratinized tissue at the treated site has not been identified.

The effectiveness of Gintuit beyond six months or with repeat administration was not evaluated in the clinical trials.

Gintuit is supplied ready for use as a cellular sheet approximately 75 mm in diameter and 0.75 mm thick, in a sealed heavy-gauge polyethylene bag (polybag) with a 10% CO2/air atmosphere. Gintuit is stored on a semi-permeable polycarbonate base within a plastic insert, which separates the product from the agarose gel medium in a sterile transparent shipping tray.
(NDC 42606-044-01)

Prior to application of Gintuit, the healthcare provider should

Following application of Gintuit, provide post-procedure instructions, including the following 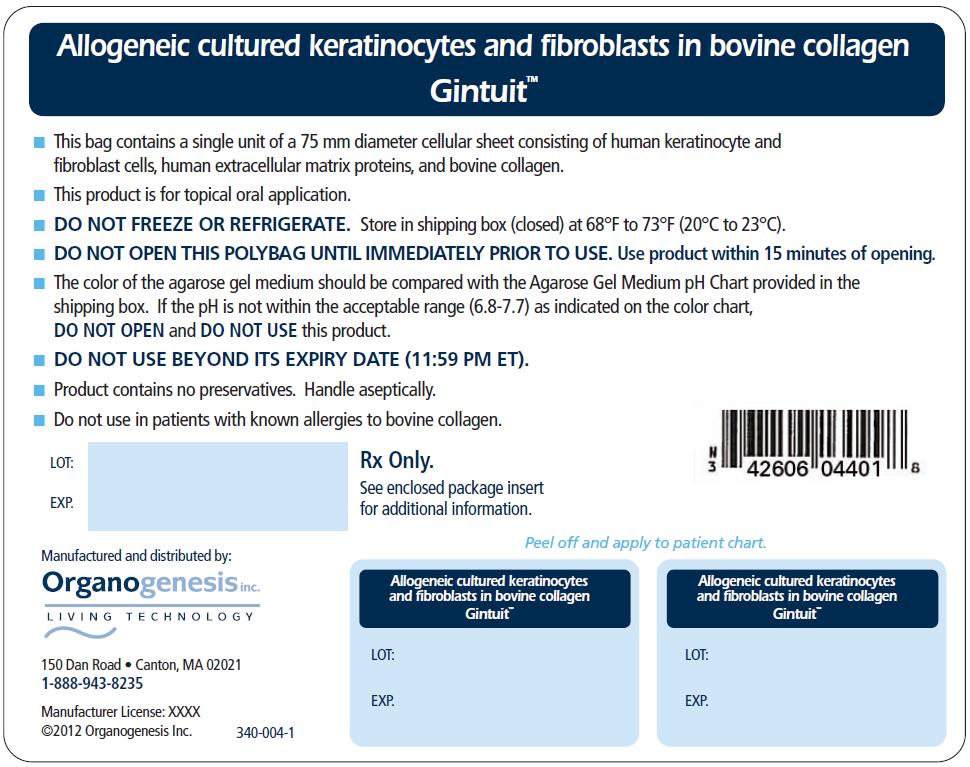 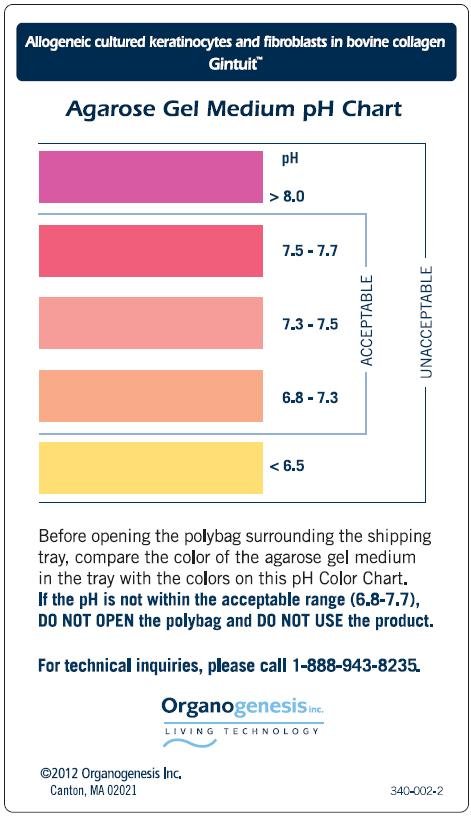 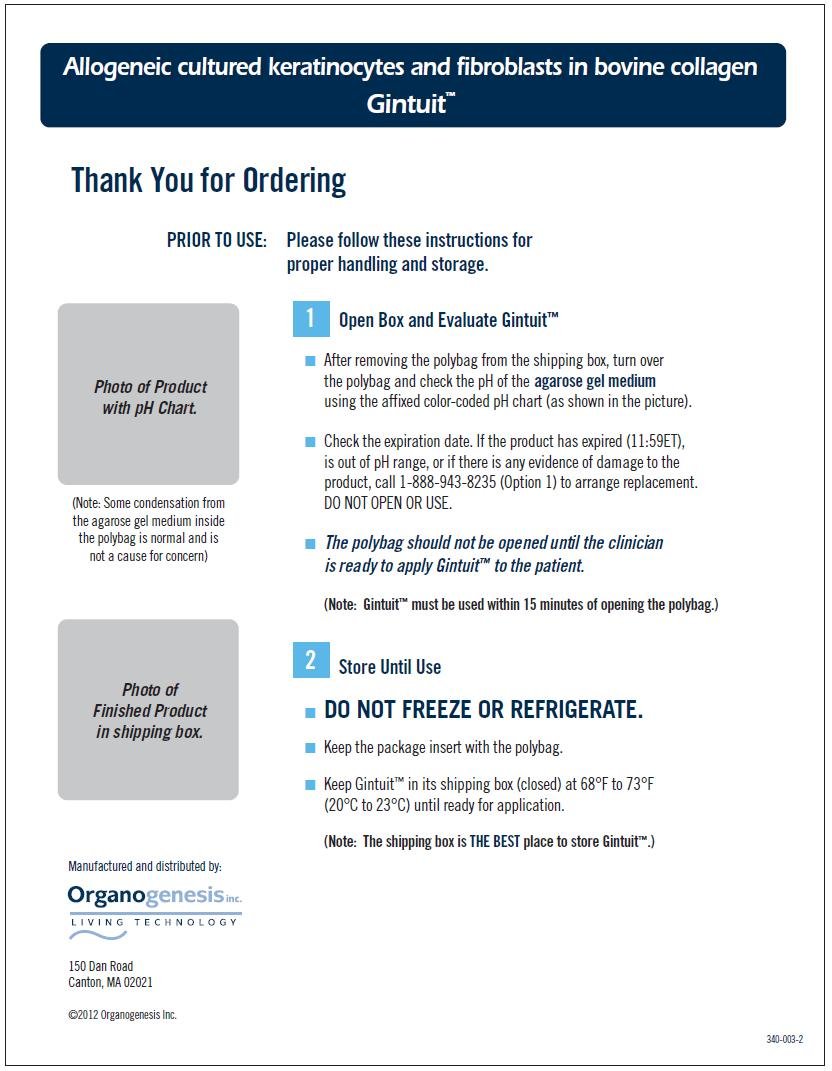