Acetaminophen, 4'-hydroxyacetanilide, a slightly bitter, white, odorless, crystalline powder, is a non-opiate, non-salicylate analgesic and antipyretic. It has the following structural formula:

The analgesic action of Acetaminophen involves peripheral influences, but the specific mechanism is as yet undetermined. Antipyretic activity is mediated through hypothalamic heat regulating centers. Acetaminophen inhibits prostaglandin synthetase. Therapeutic doses of Acetaminophen have negligible effects on the cardiovascular or respiratory system; however, toxic doses may cause circulatory failure and rapid shallow breathing.

Acetaminophen:
Acetaminophen is rapidly absorbed from the gastrointestinal tract and is distributed throughout most body tissue. The plasma half life is 1.25 to 3 hours, but may be increased by liver damage and following overdosage. Elimination of Acetaminophen is principally by liver metabolism (conjugation) and subsequent renal excretion of metabolites. Approximately 85% of an oral dose appears in the urine within 24 hours of administration, most as the glucuronide conjugate, with small amounts of other conjugates and unchanged drug. (See Overdosage for toxicity information)

Phenyltoloxamine Citrate:
Phenyltoloxamine Citrate is an H1 blocking agent which interferes with the action of histamine primarily in capillaries surrounding mucous tissues and sensory nerves of the nasal and adjacent areas. It has the ability to interfere with certain areas of acetylcholine inhibiting secretions in the nose, mouth and pharynx. It commonly causes CNS depression.

For the temporary relief of minor aches and pains associated with headaches, backache, muscular aches, the menstrual and premenstrual periods, colds, the flu, toothaches, as well as for minor pain from arthritis and to reduce fever.

This product should not be administered to patients who have previously exhibited hypersensitivity to Acetaminophen or Phenyltoloxamine Citrate.

Acetaminophen may product false positive test results for urinary 5-hydroxyindoleacetic acid. The sedative effects of Phenyltoloxamine Citrate are additive to the CNS depressant effects of alcohol, hypnotics, sedative and tranquilizers.

No adequate studies have been conducted in animals to determine whether Phenyltoloxamine Citrate or Acetaminophen have a potential for carcinogenesis, mutagenesis, or impairment of fertility.

Teratogenic Effects: Pregnancy Category C: There are no adequate and well controlled studies in pregnant women. Use during pregnancy only if the potential benefit justifies the potential risk to the fetus.

Acetaminophen is excreted in breast milk in small amounts but the significance of its effect on nursing infants in not knows. Because many drugs are excreted in human milk and because of the potential for serious adverse reactions in nursing infants from Phenyltoloxamine Citrate and Acetaminophen, a decision should be made whether to discontinue the drug, taking into account the importance of the drug to the mother.

The following adverse drug events may be borne in mind as potential effects of Acetaminophen: allergic reactions, rash, thrombocytopenia , argranulocytosis.

Following an acute overdosage, toxicity may result from Phenyltoloxamine Citrate or Acetaminophen.

Acetaminophen:In Acetaminophen overdosage: dose-dependent, potentially fatal hepatic necrosis is the most serious adverse effect. Renal tubular necrosis, hypoglycemic coma, and thrombocytopenia may also occur. Early symptoms following a potentially hepatotoxic overdose may include: nausea, vomiting, daiphoresis and general malaise. Clinical and laboratory evidence of hepatic toxicity may not be apparent until 48 to 72 hours post-ingestion. In adults, hepatic toxicity has rarely been reported with acute overdoses of less than 10 grams or fatalities with less than 15 grams.

Treatment: A single or multiple overdose with Phenyltoloxamine Citrate or Acetaminophen is a potentially lethal overdose, and consultation with a regional poison control center is recommended.

Immediate treatment includes support of cardiorespiratory function and measures to reduce drug absorption. Vomiting should be induced mechanically, or with syrup of Ipecac, if the patient is alert (adequate pharyngeal and laryngeal reflexes).

Children under six years of age: Consult a physician.

KEEP THIS AND ALL DRUGS OUT OF THE REACH OF CHILDREN

In case of accidental overdose, seek professional assistance or contact a Poison Control Center immediately. Prompt medical attention is critical for adults as well as for children even if you do not notice any signs or symptoms. As with any drug, if you are pregnant or nursing a baby, seek the advise of a health professional before using this product. 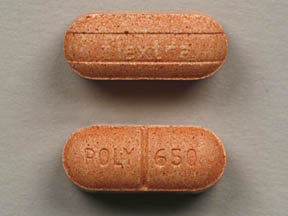