For once daily self-applied systemic use as a dental caries preventive in pediatric patients. It has been established that ingestion of fluoridated drinking water (1 ppm F*) during the period of tooth development results in a significant decrease in the incidence of dental caries.1 Epiflur ™ (sodium fluoride) Tablets were developed to provide systemic fluoride for use as a supplement in pediatric patients from 6 months to age 3 years and older living in areas where the drinking water fluoride content does not exceed 0.6 ppm F*.

Epiflur™ Tablets, 1 mg F* are contraindicated when the fluoride content of drinking water is 0.3 ppm F* or more and should not be administered to pediatric patients under age 6 years.

Prolonged daily ingestion of quantities greater than the recommended amount may result in various degrees of dental fluorosis in pediatric patients under age 6 years, especially if the water fluoridation exceeds 0.6 ppm. Read directions carefully before using. Keep out of the reach of infants and children.

Please refer to the CONTRAINDICATIONS:, WARNINGS: and OVERDOSAGE sections for overdosage concerns. Use in pediatric patients below the age of 6 months is not recommended by current American Dental Association and American Academy of Pediatrics guidelines.

Do not eat or drink dairy products within one hour of fluoride administration. Incompatibility of fluoride with dairy foods has been reported due to formation of calcium fluoride which is poorly absorbed.

In a study conducted in rodents, no carcinogenesis was found in male and female mice and female rats treated with fluoride at dose levels ranging from 4.1 to 9.1 mg/kg of body weight. Equivocal evidence of carcinogenesis was reported for male rats treated with 2.5 mg and 4.1 mg of body weight. In a second study, no carcinogenesis was observed in rats, males or females treated with fluoride up to 11.3 mg/kg of body weight. This dose is at least 400 times greater than the recommended daily dose of Epiflur™ Tablets. Fluoride ion is not mutagenic in standard bacterial systems. It has been shown that fluoride ion has potential to induce chromosome aberrations in cultured human and rodent cells at doses much higher than those in which humans are exposed. In vivo data is conflicting. Some studies report chromosome damage in rodents while other studies using similar protocols report negative results. Potential adverse reproductive effects of fluoride exposure in humans has not been adequately evaluated. Adverse effects on reproduction were reported for rats, mice, fox, and cattle exposed to 100 ppm or greater concentrations of fluoride in their diet or drinking water. Other studies conducted in rats demonstrated that lower doses of fluoride (5 mg/kg of body weight) did not result in impaired fertility and reproductive capabilities. This dose is approximately 200 times greater than the recommended daily dose of Epiflur™ Tablets.

It has been shown that fluoride crosses the placenta of rats, but only 0.01% of the amount administered is incorporated in fetal tissue. Animal studies (rats, mice, rabbits) have shown that fluoride is not a teratogen. Maternal exposure to 12.2 mg fluoride/kg of body weight (rats) or 13.1 mg/kg of body weight (rabbits) did not affect the litter size or fetal weight and did not increase the frequency of skeletal or visceral malformations. Epidemiological studies conducted in areas with high levels of naturally fluoridated water showed no increase in birth defects. Heavy exposure to fluoride during in utero development may result in skeletal fluorosis which becomes evident in childhood.

It is not known if fluoride is excreted in human milk. However, many drugs are excreted in human milk and caution should be exercised when Fluoride Tablets are administered to a nursing woman. Reduced milk production was reported in farm-raised fox when the animals were fed a diet containing a high concentration of fluoride (98 – 137 mg/kg of body weight). No adverse effects on parturition, lactation, or offspring were seen in rats administered fluoride up to 5 mg/kg of body weight. This dose is at least 200 times greater than the recommended daily dose of Epiflur™ Tablets.

The use of Epiflur™ Tablets as a caries preventive in pediatric age groups 6 months to 16 years is supported by evidence from adequate and well controlled studies on fluoride supplementation from birth through adolescence. 1-5

Epiflur™ Tablets (any strength) are not indicated for use in geriatric patients.

Allergic rash and other idiosyncrasies have been rarely reported.

Dissolve in the mouth or chew before swallowing, preferably at bedtime after brushing teeth. See schedule below to determine dosage. 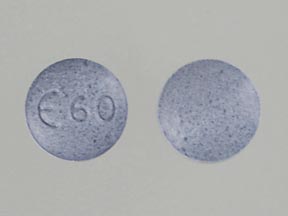