WEDNESDAY, March 31, 2021 -- In January, the coronavirus swept through Brian and Maria Padla's family of seven in Philadelphia, starting with their oldest daughter, 16, and then infecting Brian, Maria, and their four younger children.

The virus seemingly came and went without much fanfare for the family. During their two-week-long quarantine, the kids spent a day or two with runny noses and low-grade fevers. Brian and Maria felt a bit worse, and their symptoms lasted longer, but it was still only a mild illness in their experience.

Then, on Feb. 11 – almost exactly four weeks to the day when the Padlas were first struck by COVID-19 – their youngest son, 4-year-old James, came down with another illness.

They would later find out that James had multisystem inflammatory syndrome (MIS-C), a mysterious and severe condition linked to COVID-19 infection that primarily affects children.

On that Thursday morning in February, Brian and Maria were getting their five kids ready to leave for their homeschooling co-op when James said he had to go to the bathroom. When James went into the bathroom, he started screaming. Brian asked his son what was wrong, but James said nothing in response.

James' initial outcry was a fitting symbol of what was to come.

It became clear that James wasn't well that morning, so Brian called into work to say that he'd be staying home to take care of him. Brian, 40, is a music director at a parish in Philadelphia and a music teacher at a local Catholic school that has been open for in-person classes.

During that first day, James seemed to be dealing with the average type of virus that often infects children in the winter. When Brian called James' doctor, the pediatrician agreed with that assessment. James was tired and had a fever of around 101 degrees.

However, the next day he refused to eat, go to the bathroom or even get out of bed. Then, his fever went up to 103 – and close to 104 – and Tylenol wouldn't bring it down.

Friday marked the second call to their pediatrician, who said that it was just "some kind of fever" and gave them the typical advice given the knowledge at hand, to keep James hydrated and call back if anything changes.

Late that evening, James started to develop what the Padlas would later find out are the "tell-tale symptoms" of MIS-C. "He started getting a rash on the palms of his hands, the bottom of his feet and his ears," Brian said. "His lips got really dark red and swollen, and the whites of his eyes turned very red."

Other than fever, red eyes, rash and fatigue, common symptoms of MIS-C include abdominal pain, vomiting, diarrhea and neck pain, according to the U.S. Centers for Disease Control and Prevention.

Maria started searching James' symptoms on Google and came across an article "for this thing called MIS-C," Brian said. While he thought there was "no way" his son could have MIS-C, his parental instincts kicked in at that moment.

"I'm usually the one who says to my wife, 'everything's fine, whatever.' But I took one look at him, and I was just like, there's something definitely 100% not right," Brian remembered.

Very early the following day, the Padlas took James to the emergency room at Children's Hospital of Philadelphia. 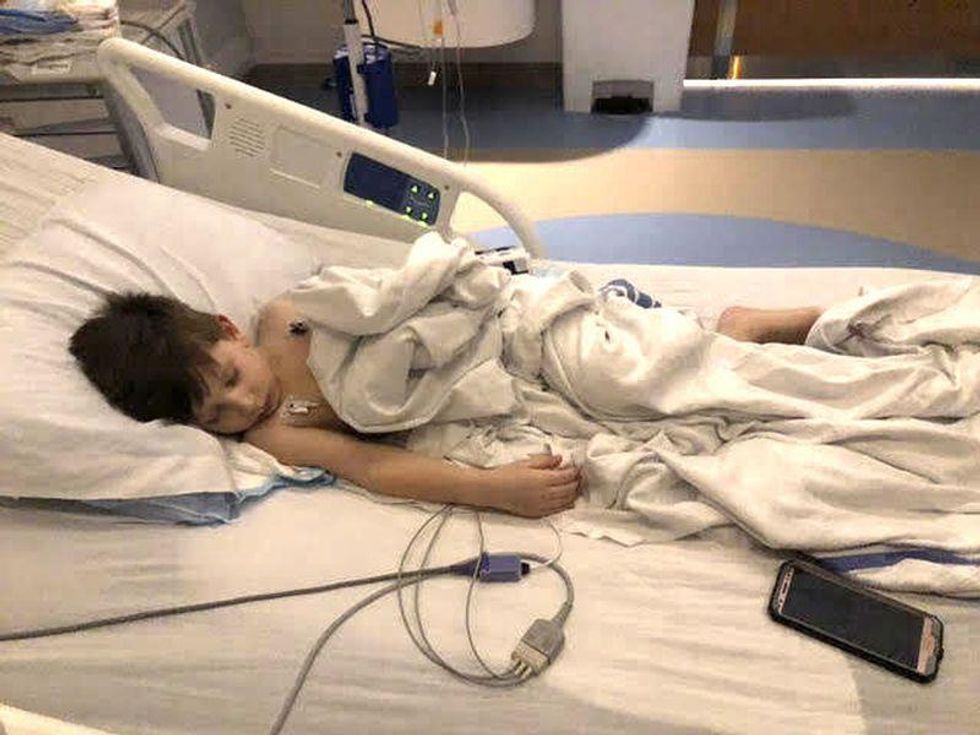 James in the hospital

From there, everything happened quickly. "Probably within 15 minutes of a couple of doctors coming in, they said, 'This sounds like he has the textbook case of multisystem inflammatory syndrome,'" Brian recalled.

MIS-C is a rare illness that typically arises in children who were previously infected with COVID-19. It usually starts around a month after someone contracts COVID-19, as was the case for James.

The condition is marked by an influx of inflammation that affects the functioning of organs and systems throughout the body. While the exact cause is unknown, MIS-C seems to be rooted in the body's immune system reacting excessively to the COVID-19 virus. Many kids who get MIS-C need to be hospitalized, but the treatment options are usually successful, and most kids recover. However, scientists and doctors are still looking at the potential long-term effects.

There have been 2,617 cases of MIS-C and 33 deaths reported to the CDC as of March 1, 2021. For some perspective, the virus that causes COVID-19 is known to primarily affect older adults and rarely leads to hospitalization and death in children, but there have been an estimated 104 deaths due to COVID-19 in kids younger than 4, and 227 deaths in kids aged 5 to 17, according to the CDC.

While MIS-C is a rare but severe complication that can come from COVID-19, it's not the only risk that the virus poses to children.

"It's not correct to say that COVID-19 is completely benign in children," said Dr. Sean O'Leary, a pediatric infectious disease specialist at Children's Hospital Colorado. "With acute COVID – non-MIS-C – some of those kids can get very sick as well and even die. So, it's certainly not fair to say it's completely benign in kids," he said.

On the other hand, O'Leary explained that the degree of risk that COVID-19 presents to children is in line with many other pediatric infectious diseases. Unlike adults, the severe outcomes of COVID-19 in children "are kind of in the same ballpark as influenza in terms of both morbidity and mortality," he said. "And we generally don't shut schools down when influenza season hits or when there are lots of other respiratory viruses hitting."

Because of its rarity, the need to simultaneously warn parents about this condition and assure them that the risks are low is a balancing act. "You don't want parents to panic every time their child has a fever for a couple of days," O'Leary said.

Brian is well aware of this balancing act and he wants more people to learn about this condition so that they can be prepared if it happens to their kid, but he also knows how unlucky his son was to get it. "I saw there's like 2,600 cases or something countrywide – what are the odds of my kid getting that?" he asked.

When James was admitted to the hospital and diagnosed with MIS-C, the doctors told Brian and Maria that the treatment options are usually effective, and most kids are back on their feet within a day or two.

Unfortunately, James' experience was a bit more complicated. The doctors started James on steroids and intravenous immunoglobulin (a transfusion of disease-fighting antibodies), intended to calm the rampant inflammation in his body.

It didn't work. James' fever continued to spike, and the pain in his belly became so bad that no one could touch him.

Waiting to see if the first treatment would work was one of the most trying periods in James' battle with MIS-C, according to Brian. "He basically turned into an infant again," Brian said. "He couldn't move, and anytime we would try to get him to go to the bathroom, he would scream from the pain in his belly. We wound up just having to put him in diapers because he started peeing the bed from the IV fluids and all that. He just sat there the entire day and did nothing except cry and sleep."

James' doctors told Brian this was not unusual, as some kids respond better to different treatments. "They said that they're seeing an increased caseload of this, and some of them have been getting a little more difficult to treat than others," Brian said. "Unfortunately, I guess James was one of those people."

When it became clear that a new approach was needed, the doctors decided to start him on a daily injection of a drug called anakinra, a medication that tames the immune system and is typically used to treat rheumatoid arthritis. "That really is when he started making his turn around – when they gave him the anakinra – each day he just got better and better," Brian said.

Children's hospitals now have a pretty firm grasp on how to treat this condition, even if there remains much mystery surrounding why, how and in whom it develops.

Children's Hospital Colorado has taken care of over 90 patients with MIS-C since the pandemic began, O'Leary estimated. Children's hospitals typically see spikes in MIS-C cases around four weeks after COVID-19 cases peak in the area due to the timeline of the disease.

"Things got really busy in December, roughly a month after that big fall surge had picked up," O'Leary said. "I think we had, on average, a patient a day in December, and that continued some into January and, nowadays, I'd say we're seeing one or two cases a week."

Because MIS-C can affect various organs and systems in the body, doctors with different specialties usually join forces to treat MIS-C as a team.

A team of doctors gathered together to treat MIS-C may include cardiologists, infectious disease specialists, rheumatologists and nephrologists (kidney specialists). "Basically, almost any team can sometimes get involved," O'Leary added.

Brian said that having a team of doctors was helpful in his experience, as each doctor was able to describe what was going on in different parts of James' body and how the treatment options may help. "They were really good at explaining things," Brian said. "But, unfortunately, at the point that you're listening to it, you hear it, but you don't absorb all the information you're hearing."

After 10 days in the hospital, including a couple of days on the new treatment, James started feeling well enough to stand up. His 4-year-old legs were weak from the sickness and the days of lying in bed, so a physical therapist came in to help him practice walking again. Soon after, he walked out of the hospital holding the hands of his parents for support.

Once home, James still needed to get anakinra injections for a little while, according to Brian. The only health concern remaining is the inflammation in James' coronary artery, which his doctors will keep an eye on.

Emotionally, Brian sees signs of how the trauma of the experience may still be affecting James. "He has these emotional breakdowns and outbursts, which is very uncharacteristic of him," Brian said.

At this point, doctors don't know why any child will go on to develop MIS-C after having COVID-19. This question is top of mind for doctors like O'Leary, who are treating these kids.

"I think understanding how it happens and what's causing it is very important and is kind of a fascinating question, because there really aren't other viruses that do this," O'Leary said. "With MIS-C, it's fairly clearly linked with prior COVID-19 infection, but why that happens in certain individuals and not others is a very unusual question."

Further Support and Information on COVID-19

Are You Eating Foods That Harm Your 'Microbiome'?

MONDAY, April 19, 2021 -- People who eat plenty of vegetables, fish and fiber may have more inflammation-fighting bacteria in their guts, but fast-food lovers may be feeding...

Oregonians Rebel as State Considers 'Indefinite Extension' of Pandemic Rules An indefinite extension on wearing masks and social distancing in all businesses is being...