Vasectomy reversal is surgery to undo a vasectomy. During the procedure, a surgeon reconnects each tube (vas deferens) that carries sperm from a testicle into the semen. After a successful vasectomy reversal, sperm are again present in the semen, and you may be able to get your partner pregnant.

Pregnancy rates after vasectomy reversal will range from about 30% to over 90%, depending on the type of procedure. Many factors affect whether a reversal is successful in achieving pregnancy, including time since a vasectomy, partner age, surgeon experience and training, and whether you had fertility issues before your vasectomy.

Deciding to have a vasectomy reversal may happen for several reasons, including loss of a child, a change of heart or remarriage, or to treat chronic testicular pain after vasectomy.

Almost all vasectomies can be reversed. However, this doesn't guarantee success in conceiving a child. Vasectomy reversal can be attempted even if several years have passed since the original vasectomy — but the longer it has been, the less likely it is that the reversal will work.

When considering vasectomy reversal, here are a few things to think about:

When choosing a doctor, don't be afraid to ask questions about how many vasectomy reversals the doctor has done, the type of techniques used and how often the vasectomy reversals have resulted in pregnancy. Also ask about the risks and potential complications of the procedure.

Make sure you know what steps you need to take before surgery. Your doctor will probably ask you to stop taking certain medications, including blood-thinning medications and pain relievers, such as aspirin or ibuprofen (Advil, Motrin IB, others), because they can increase your risk of bleeding.

Bring tightfitting undergarments, such as an athletic supporter, to wear after surgery. This will support your scrotum and hold bandages in place.

Arrange for someone to drive you home after surgery. Surgery generally takes about two to four hours or longer. You may need additional time to recover if the procedure is done with general anesthesia. Ask your doctor when you can expect to go home after surgery.

Before vasectomy reversal surgery, your doctor will likely want to:

Doctors usually perform vasectomy reversals at a surgery center or hospital. The procedure is generally done on an outpatient basis — without an overnight stay. Some surgeons can do the surgery in the clinic, but you'll want to make sure that the surgeon is able to do a more complex repair (vasoepididymostomy) in the clinic, if that becomes necessary.

Your doctor may use general anesthesia to make you unconscious during surgery. Or your surgeon may give you an anesthetic that keeps you from feeling pain but doesn't put you to sleep — such as a local anesthetic.

Vasectomy reversal is more difficult than a vasectomy and should be done using microsurgery, in which a surgeon uses a powerful surgical microscope to magnify the vas deferens as much as 40 times its size. This type of surgery requires specialized skills and expertise.

Doctors performing this surgery usually will reattach the vas deferens in one of two ways:

The decision to perform a vasovasostomy versus a vasoepididymostomy depends on whether sperm are seen when fluid from the vas deferens is analyzed at the time of surgery.

It is not possible to know ahead of time which procedure is needed. In most cases, the surgeon decides during the operation which technique will work best. Sometimes a combination of the two surgical techniques is needed — a vasovasostomy on one side and a vasoepididymostomy on the other. The longer it has been since your vasectomy, the more likely you are to need a vasoepididymostomy on one or both sides.

During surgery, your doctor will make a small cut (incision) on your scrotum. This will expose the tube that carries sperm (vas deferens) and release it from surrounding tissues.

If the fluid contains no sperm, scar tissue may be blocking sperm flow. In this case, your doctor may choose to perform a vasoepididymostomy.

Robot-assisted surgery has been used for vasectomy reversal but usually is required only in select cases.

Immediately after surgery, your doctor will cover the incision with bandages. You'll put on tightfitting undergarments, such as an athletic supporter, and apply ice for 24 to 48 hours to reduce swelling.

You may be sore for several days. If your doctor places bandages over the incision after your surgery, ask when it's OK to take them off. Any stitches should dissolve in seven to 10 days.

After you return home, take it easy and try to limit activities that might cause the testicles to move around excessively. As the anesthetic wears off, you may have some pain and swelling. For most men, the pain isn't severe and gets better after a few days to a week.

Your doctor may also give you the following instructions:

Although it's usually not required or recommended, you may choose to have sperm frozen (cryopreservation) in case your vasectomy reversal doesn't work. If you're not able to father a child through sexual intercourse, you may still be able to have children through assisted reproductive technology such as in vitro fertilization. 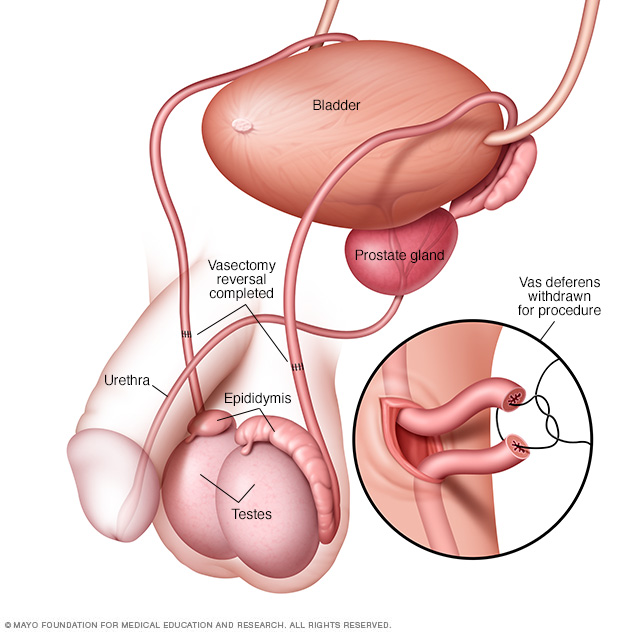 Sometime after surgery, your doctor will examine your semen under a microscope to see if the operation was successful.

Your doctor may want to check your semen periodically. Unless you get your partner pregnant, checking your semen for sperm is the only way to tell if your vasectomy reversal was a success.

When a vasectomy reversal is successful, sperm may appear in the semen within a few weeks, but it can sometimes take a year or more. The likelihood of achieving pregnancy depends on various factors, including the number and quality of sperm present and the female partner's age.

If the vasectomy reversal doesn't work

Vasectomy reversals sometimes fail if there is an underlying issue with the testicle that cannot be recognized during surgery or if a blockage develops sometime after surgery. Some men have a second-attempt vasectomy reversal surgery if the procedure doesn't work the first time. Success rates are slightly lower for the second attempt than for the initial attempt.

You may also be able to father a child through in vitro fertilization by using frozen sperm. Sperm may be retrieved directly from the testicle or epididymis either at the time of the reversal surgery or at a later date. Doctors don't usually recommend freezing sperm at the time of reversal surgery, as it may be an unnecessary extra procedure.