Vasectomy is a form of male birth control that cuts the supply of sperm to your semen. It's done by cutting and sealing the tubes that carry sperm. Vasectomy has a low risk of problems and can usually be performed in an outpatient setting under local anesthesia.

Before getting a vasectomy you need to be certain you don't want to father a child in the future. Although vasectomy reversals are possible, vasectomy should be considered a permanent form of male birth control.

Vasectomy is a safe and effective birth control choice for men who are certain they don't want to father a child in the future.

A potential concern with vasectomy is that you might later change your mind about wanting to father a child. Although it might be possible to reverse your vasectomy, there's no guarantee it will work. Reversal surgery is more complicated than vasectomy, can be expensive and is ineffective in some cases.

If you have chronic testicular pain or testicular disease, you're not a good candidate for a vasectomy. For most men, a vasectomy doesn't cause any noticeable side effects, and serious complications are rare.

Side effects right after surgery can include:

Delayed complications can include:

Many men worry that a vasectomy could cause serious problems — but these fears are unfounded. For example, a vasectomy won't:

Your doctor will probably ask you to stop taking aspirin, nonsteroidal anti-inflammatory drugs or other blood-thinning medications several days before your surgery. These can include warfarin (Coumadin, Jantoven, others), heparin and over-the-counter pain medications such as ibuprofen (Advil, Motrin IB, others).

Bring a pair of tightfitting underwear or an athletic supporter to wear after the procedure to support the scrotum and minimize swelling.

Shower or bathe on the day of the surgery. Be sure to wash your genital area thoroughly. Trim hair if necessary.

Arrange for a ride home after your surgery to avoid movement and pressure on the surgery area caused by driving.

Before doing a vasectomy, your doctor will want to meet with you to be sure it's the right form of birth control for you.

At the initial appointment (consultative visit), be prepared to discuss:

Some family medicine or general practice doctors do vasectomies, but most are done by doctors who specialize in the male reproductive system (urologists).

A vasectomy is usually done at a doctor's office or surgery center under local anesthesia, which means you'll be awake and have medicine to numb the surgery area.

Vasectomy surgery usually takes about 10 to 30 minutes. To perform a vasectomy, your doctor will likely follow these steps:

Following a vasectomy, you'll have some bruising, swelling and pain. It usually gets better within a few days. Your doctor will give you instructions for recovery. Your doctor might tell you to:

You will ejaculate semen (seminal fluid) after a vasectomy but it will no longer contain sperm (the reproductive cells) once you have ejaculated about 20 times. A vasectomy blocks the sperm made by the testes from reaching the semen. Instead, the body absorbs the sperm, which is harmless. 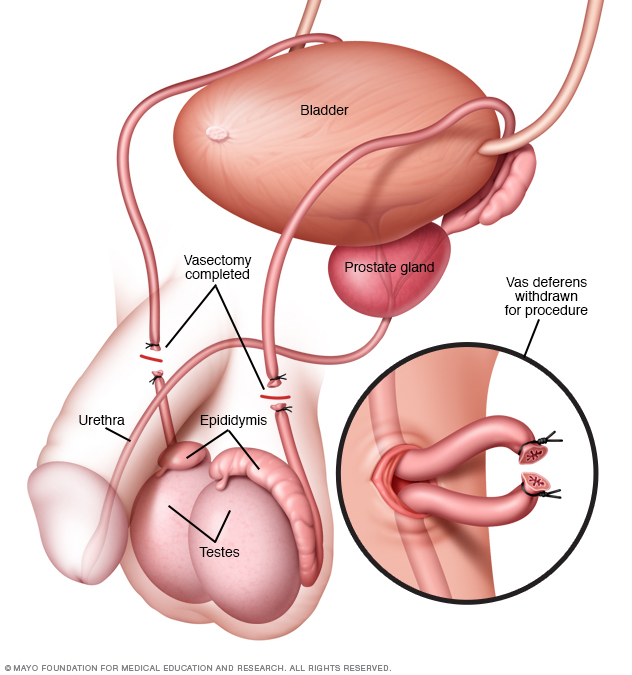 In a vasectomy, the tube that carries sperm from each testicle (vas deferens) is cut and sealed.

A vasectomy doesn't provide immediate protection against pregnancy. Use an alternative form of birth control until your doctor confirms there are no sperm in your semen. Before having unprotected sex, you'll need to wait several months or longer and ejaculate 15 to 20 times or more to clear any sperm from your semen.