The originating document has been archived. We cannot confirm the completeness, accuracy and currency of the content.

Spermicide is a type of contraceptive that kills sperm or stops it from moving. You insert spermicide in the vagina before sex. The chemicals in the spermicide, such as nonoxynol-9, prevent sperm from entering the uterus. You can get spermicide over-the-counter. It's available in many forms, including cream, gel, foam, film, suppository and tablet.

Spermicide isn't a very effective birth control method when used alone. However, you can use spermicide with a barrier method — such as a condom, diaphragm or cervical cap — to improve its effectiveness with preventing pregnancy. Spermicide doesn't protect against sexually transmitted infections.

Newer to the market is a vaginal pH regulator gel (Phexxi) that immobilizes sperm, so they can't get to an egg to fertilize it. Similar to some types of spermicide, you put the gel in your vagina with a pre-filled applicator. This type of contraceptive gel is available by prescription only. 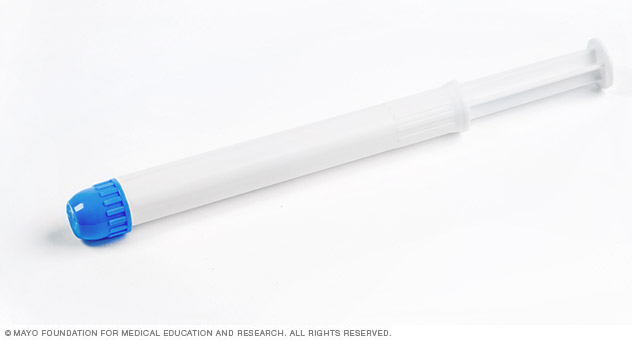 Spermicide is a contraceptive substance that immobilizes or kills sperm before they enter the uterus. This single-use applicator contains a spermicide gel. Spermicide can be used alone or with a barrier method — such as a condom, diaphragm or cervical cap — to prevent pregnancy.

Spermicide is a contraceptive that helps prevent pregnancy. Spermicide:

Your health care provider may discourage use of spermicide if:

Vaginal pH regulator gel (Phexxi) also helps prevent pregnancy. It provides a nonhormonal option for birth control to be used right before you have sex.

About 28 out of 100 women who use spermicide alone will get pregnant in the first year of typical use. The vaginal pH regulator gel has shown similar results. Using backup birth control can reduce the risk of pregnancy.

Spermicide may increase the risk of urinary tract infections. Vaginal irritation — such as burning or itching or a rash — is the most common side effect of spermicide. Spermicide may also cause an allergic reaction. Spermicide may cause penile irritation or burning urination in your sexual partner.

Vaginal pH regulator gel can cause vaginal itching or a burning sensation in the vagina. Penile irritation is also possible. More research is needed to know whether this contraceptive gel might protect against STIs.

You can use vaginal pH regulator gel in combination with most types of birth control, but it's not recommended for use with the vaginal ring.

Before using spermicide or a vaginal pH regulator gel, read the product instructions carefully. Consult your health care provider if you have any concerns.

Similar to spermicide, you apply the vaginal pH regulator gel (Phexxi) directly to your vagina. The combination of lactic acid, citric acid and potassium bitartrate in the gel immobilizes sperm so that they can't fertilize an egg. You need to apply the gel within an hour before having sex and reapply the gel each time you have sex.

Talk with your health care provider if you develop persistent vaginal irritation or recurring urinary tract infections after using spermicide or a vaginal pH regulator gel. 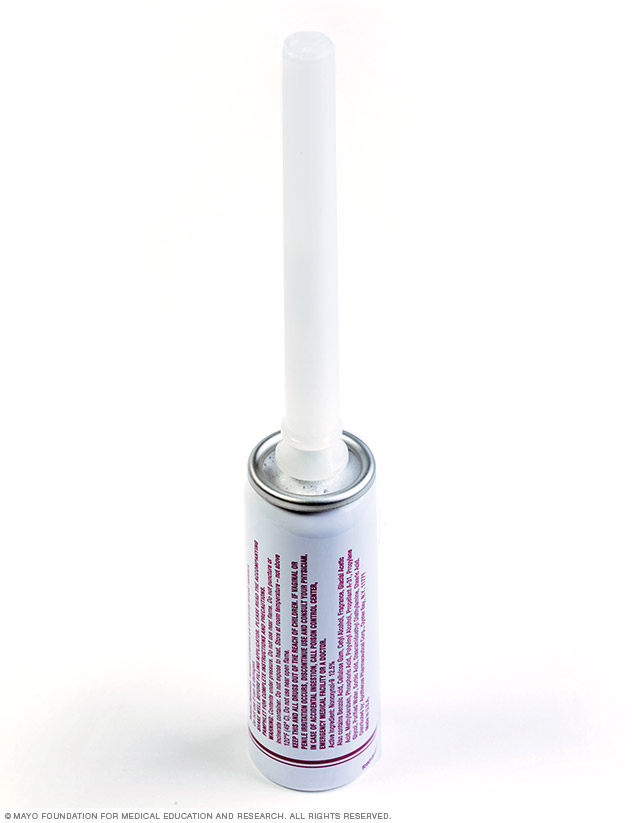 Spermicide comes in many forms. This is an example of a package that contains spermicide foam. Spermicide can be used alone or with a barrier method — such as a condom, diaphragm or cervical cap — to prevent pregnancy. 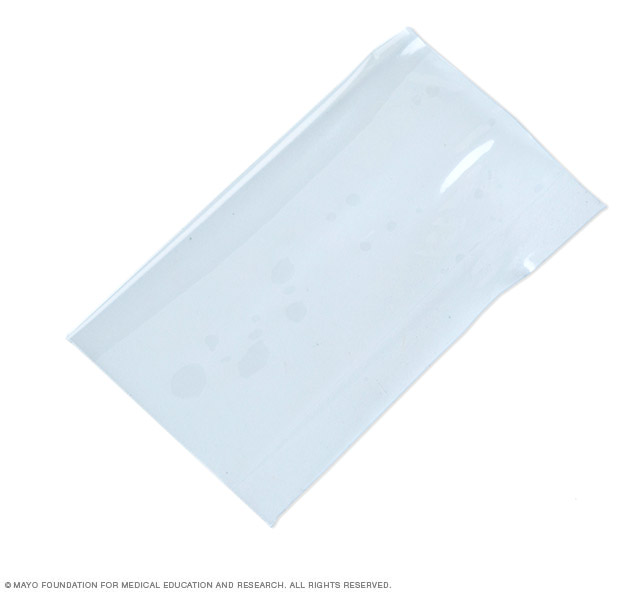 Spermicide comes in many forms. This is a spermicide film, which dissolves once it's placed in the vagina. Spermicide can be used alone or with a barrier method — such as a condom, diaphragm or cervical cap — to prevent pregnancy.