Radiation therapy is a type of cancer treatment that uses beams of intense energy to kill cancer cells. Radiation therapy most often uses X-rays, but protons or other types of energy also can be used. 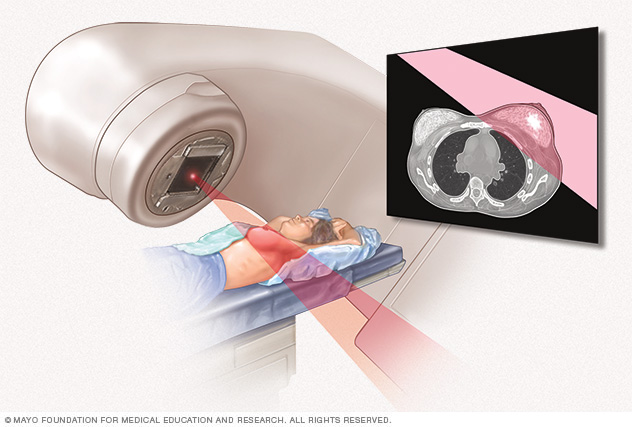 External beam radiation uses high-powered beams of energy to kill cancer cells. Beams of radiation are precisely aimed at the cancer using a machine that moves around your body.

How radiation therapy is used in people with cancer

Your doctor may suggest radiation therapy as an option at different times during your cancer treatment and for different reasons, including:

Some side effects may develop later. For example, in rare circumstances a new cancer (second primary cancer) that's different from the first one treated with radiation may develop years later. Ask your doctor about potential side effects, both short and long term, that may occur after your treatment.

Before you undergo external beam radiation therapy, your health care team guides you through a planning process to ensure that radiation reaches the precise spot in your body where it's needed. Planning typically includes:

After the planning process, your radiation therapy team decides what type of radiation and what dose you'll receive based on your type and stage of cancer, your general health, and the goals for your treatment.

The precise dose and focus of radiation beams used in your treatment is carefully planned to maximize the radiation to your cancer cells and minimize the harm to surrounding healthy tissue.

External beam radiation therapy is usually conducted using a linear accelerator — a machine that directs high-energy beams of radiation into your body.

You typically receive external beam radiation on an outpatient basis five days a week over a certain period of time. In most instances, treatments are usually spread out over several weeks to allow your healthy cells to recover in between radiation therapy sessions.

Expect each treatment session to last approximately 10 to 30 minutes. In some cases, a single treatment may be used to help relieve pain or other symptoms associated with more-advanced cancers.

During a treatment session, you'll lie down in the position determined during your radiation simulation session. You might be positioned with molds to hold you in place.

The linear accelerator machine may rotate around your body to reach the target from different directions. The machine makes a buzzing sound.

You'll lie still and breathe normally during the treatment, which takes only a few minutes. For some patients with lung or breast cancer, you might be asked to hold your breath while the machine delivers the treatment. 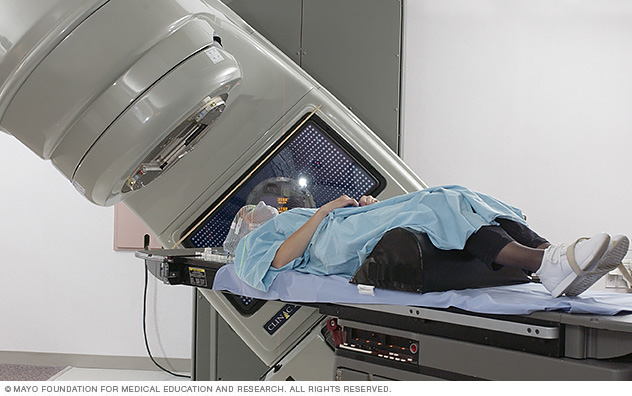 During external beam radiation therapy, you're positioned on a table and a large machine moves around you sending beams of radiation into precise points in your body.

If you're receiving radiation to a tumor, your doctor may have you undergo periodic scans after your treatment to see how your cancer has responded to radiation therapy.

In some cases, your cancer may respond to treatment right away. In other cases, it may take weeks or months for your cancer to respond. Some people aren't helped by radiation therapy.