Prostate brachytherapy procedures vary based on the type:

What you experience during brachytherapy depends on whether you receive HDR or LDR treatment. 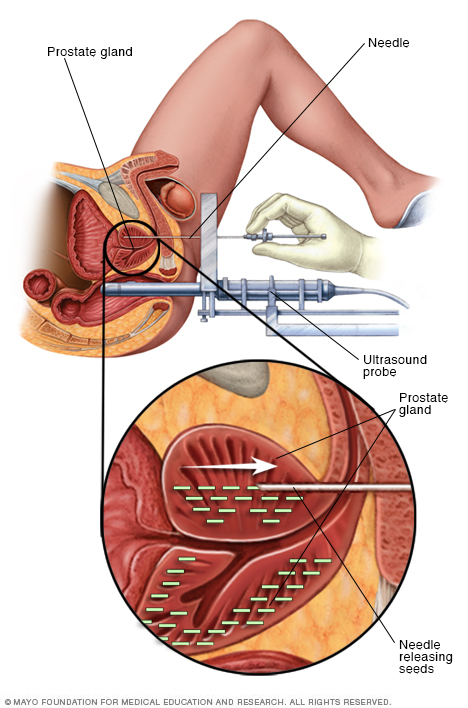 Permanent prostate brachytherapy involves placing many radioactive seeds within the prostate to treat prostate cancer. During the procedure, an ultrasound probe is placed in the rectum to help guide the placement of seeds. The seeds emit radiation that dissipates over a few months.

Prostate brachytherapy is used to treat prostate cancer. The procedure places radioactive sources within the prostate, so the cancer receives most of the radiation and nearby healthy tissue receives a minimal dose of radiation.

If you have early-stage prostate cancer that's less likely to spread beyond the prostate, brachytherapy may be the only treatment used.

For larger prostate cancers or those that have a greater chance of spreading beyond the prostate, brachytherapy may be used along with other treatments, such as external beam radiation therapy (EBRT) or hormone therapy.

Prostate brachytherapy generally isn't used for advanced prostate cancer that has spread to the lymph nodes or to distant areas of the body.

Prostate cancer occurs in the prostate gland, which is located just below the bladder in males and surrounds the top portion of the tube that drains urine from the bladder (urethra). This illustration shows a normal prostate gland and a prostate with a tumor.

Prostate brachytherapy may cause side effects, including:

Some serious complications can occur after prostate brachytherapy, but these are rare. They include:

To prepare for prostate brachytherapy, you will:

During this procedure, you may be placed under anesthesia so that you aren't aware during the procedure and won't feel pain.

Once the seeds are placed in your body, you'll spend some time in a recovery area, and then you can go home. The low levels of radiation in the seeds generally aren't harmful to others, but as a precaution, you may be asked to avoid close contact with children and pregnant women for a short time. Your doctor may advise you to wear a condom during sex.

Before receiving HDR brachytherapy treatments, thin tubes are inserted through the perineum and into your prostate at precise locations. You'll be under anesthesia for this part of the procedure so that you aren't aware and won't feel pain. The tubes are kept in place until you've completed your treatments.

For HDR brachytherapy treatments, the tubes are connected to a machine that feeds wires containing radioactive sources into the prostate. The radioactive wires are left in place for a set amount of time, typically several minutes. You may hear clicking noises as the machine adjusts the wires. Then the radioactive wires are removed. The procedure may be repeated a few times, depending on your specific treatment plan.

The radioactive source is removed from your body after HDR brachytherapy, so you won't need any special precautions to avoid close contact with other people.

After prostate brachytherapy, you can expect some pain and swelling in the perineum. You may find relief by placing an ice pack over the area and taking pain medication prescribed by your doctor.

You can resume normal activities when you feel up to it. Your doctor may give you instructions for your recovery, such as avoiding vigorous exercise and heavy lifting.

After prostate brachytherapy, you may undergo follow-up blood tests to measure the level of prostate-specific antigen (PSA) in your blood. These tests may give your doctor an idea of whether treatment has been successful.

Ask your doctor when you can expect to know whether your prostate cancer is responding to treatment.

Treatment for a rising PSA after brachytherapy

A persistently rising PSA level after brachytherapy may indicate that the cancer has returned. Your doctor may recommend imaging tests and a prostate biopsy to look for signs of cancer.

If your cancer has spread beyond your prostate, other treatments, such as hormone therapy, may be considered.