Myomectomy (my-o-MEK-tuh-me) is a surgical procedure to remove uterine fibroids — also called leiomyomas (lie-o-my-O-muhs). These common noncancerous growths appear in the uterus. Uterine fibroids usually develop during childbearing years, but they can occur at any age.

The surgeon's goal during myomectomy is to take out symptom-causing fibroids and reconstruct the uterus. Unlike a hysterectomy, which removes your entire uterus, a myomectomy removes only the fibroids and leaves your uterus.

Your doctor might recommend myomectomy for fibroids causing symptoms that are troublesome or interfere with your normal activities. If you need surgery, reasons to choose a myomectomy instead of a hysterectomy for uterine fibroids include:

Myomectomy has a low complication rate. Still, the procedure poses a unique set of challenges. Risks of myomectomy include:

To minimize risks of myomectomy surgery, your doctor may recommend:

You'll need to fast — stop eating or drinking anything — in the hours before your surgery. Follow your doctor's recommendation on the specific number of hours.

If you're on medications, ask your doctor if you should change your usual medication routine in the days before surgery. Tell your doctor about any over-the-counter medications, vitamins or other dietary supplements you're taking.

Depending on your procedure, you may receive one of the following types of anesthesia:

Sometimes other types of anesthesia, such as a spinal or local, may be used. Ask your doctor about the type of anesthesia you may receive.

Finally, talk to your doctor about pain medication and how it will likely be given.

Whether you stay in the hospital for just part of the day or overnight depends on the type of procedure you have. Abdominal myomectomy (laparotomy) usually requires a hospital stay of one to two days. In most cases, laparoscopic or robotic myomectomy is done outpatient or with only one overnight stay. Hysteroscopic myomectomy is often done with no overnight hospital stay.

Depending on the size, number and location of your fibroids, your surgeon may choose one of three surgical approaches to myomectomy.

In abdominal myomectomy (laparotomy), your surgeon makes an open abdominal incision to access your uterus and remove fibroids. Your surgeon will generally prefer to make a low, horizontal ("bikini line") incision, if possible. Vertical incisions are needed for larger uteruses.

In laparoscopic or robotic myomectomy, both minimally invasive procedures, your surgeon accesses and removes fibroids through several small abdominal incisions.

Compared with women who have a laparotomy, women who undergo laparoscopy have less blood loss, shorter hospital stays and recovery, and lower rates of complications and adhesion formation after surgery. There are limited comparisons between laparoscopic and robotic myomectomy. Robotic surgery may take longer and be more costly, but otherwise few differences in outcomes are reported.

To treat smaller fibroids that bulge significantly into your uterus (submucosal fibroids), your surgeon may suggest a hysteroscopic myomectomy. Your surgeon accesses and removes the fibroids using instruments inserted through your vagina and cervix into your uterus.

At discharge from the hospital, your doctor prescribes oral pain medication, tells you how to care for yourself, and discusses restrictions on your diet and activities. You can expect some vaginal spotting or staining for a few days up to six weeks, depending on the type of procedure you've had. 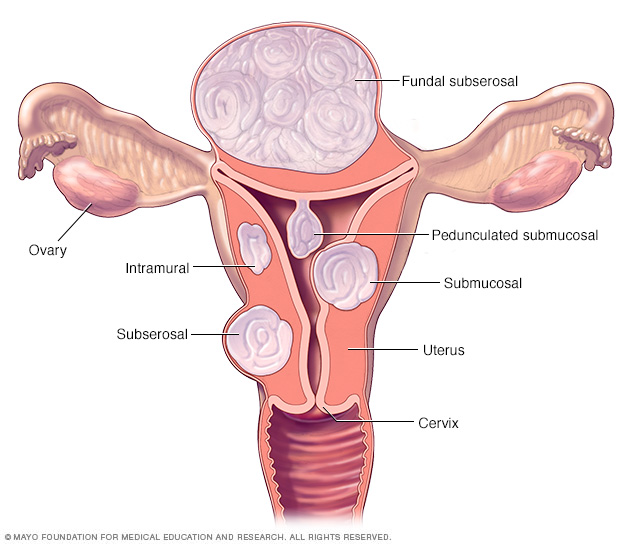 Outcomes from myomectomy may include:

Women who have new or recurring fibroids may have additional, nonsurgical treatments available to them in the future. These include:

Some women with new or recurring fibroids may choose a hysterectomy if they have completed childbearing.