A liver biopsy is a procedure to remove a small piece of liver tissue, so it can be examined under a microscope for signs of damage or disease. Your doctor may recommend a liver biopsy if blood tests or imaging studies suggest you might have a liver problem. A liver biopsy is also used to determine the severity of liver disease. This information helps guide treatment decisions.

The most common type of liver biopsy is called percutaneous liver biopsy. It involves inserting a thin needle through your abdomen into the liver and removing a small piece of tissue. Two other types of liver biopsy — one using a vein in the neck (transjugular) and the other using a small abdominal incision (laparoscopic) — also remove liver tissue with a needle. 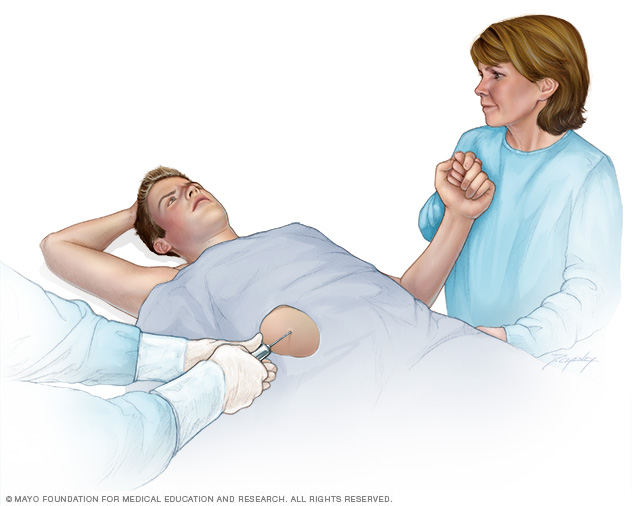 A liver biopsy is a procedure to remove a small sample of liver tissue for laboratory testing. A liver biopsy is commonly performed by inserting a thin needle through your skin and into your liver.

A liver biopsy may be done to:

Your doctor may recommend a liver biopsy if you have:

A liver biopsy also is commonly performed to help diagnose and stage certain liver diseases, including:

A liver biopsy is a safe procedure when performed by an experienced doctor. Possible risks include:

In a transjugular procedure, a thin tube is inserted through a large vein in your neck and passed down into the vein that runs through your liver. If you have a transjugular liver biopsy, other infrequent risks include:

Before your liver biopsy, you'll meet with your doctor to talk about what to expect during the biopsy. This is a good time to ask questions about the procedure and make sure you understand the risks and benefits.

When you meet with your doctor, bring a list of all medications you take, including over-the-counter medications, vitamins and herbal supplements. Before your liver biopsy, you'll likely be asked to stop taking medications and supplements that can increase the risk of bleeding, including:

You may be asked not to drink or eat for six to eight hours before the liver biopsy. Some people can eat a light breakfast.

Before your biopsy, you'll have a blood test to check your blood's ability to clot. If you have blood-clotting problems, you may be given a medication before your biopsy to reduce the risk of bleeding.

Arrangements for your recovery

You may receive a sedative before your liver biopsy. If this is the case, arrange for someone to drive you home after the procedure. Have someone stay with you or check on you during the first night. Many doctors recommend that people spend the first evening within an hour's driving distance of the hospital where the biopsy is done, in case a complication develops.

A liver biopsy is done at a hospital or outpatient center. You'll likely arrive early in the morning.

Just before your biopsy you will:

The steps involved in liver biopsy vary according to the type:

After the biopsy, you can expect to:

Your liver tissue goes to a laboratory to be examined by a doctor who specializes in diagnosing disease (pathologist). The pathologist will look for signs of disease and damage to the liver. Your biopsy report should come back from the pathology lab within a few days to a week.

At a follow-up visit, your doctor will explain the results. You may be diagnosed with a liver disease, or your liver disease may be given a stage or grade number based on the severity — mild, moderate or severe. Your doctor will discuss what treatment, if any, you need.