Occult blood in the stool may indicate colon cancer or polyps in the colon or rectum — though not all cancers or polyps bleed.

Typically, occult blood is passed in such small amounts that it can be detected only through the chemicals used in a fecal occult blood test.

A fecal occult blood test isn't recommended if you have colon cancer symptoms. If you notice blood in your stool or in the toilet or if you experience abdominal pain or a change in your bowel habits, make an appointment with your doctor.

Risks and limitations of the fecal occult blood test include:

Various foods, dietary supplements and medications can affect the results of some fecal occult blood tests — either indicating that blood is present when it isn't (false-positive) or missing the presence of blood that's actually there (false-negative). Your doctor may ask you to avoid certain foods or medicines. To ensure accurate test results, follow your doctor's instructions carefully.

For about three days before the test, your doctor may ask you to avoid:

There are several types of fecal occult blood tests, each with a different approach to collecting and testing stool. They include:

For accurate results, follow the instructions and return the samples promptly. 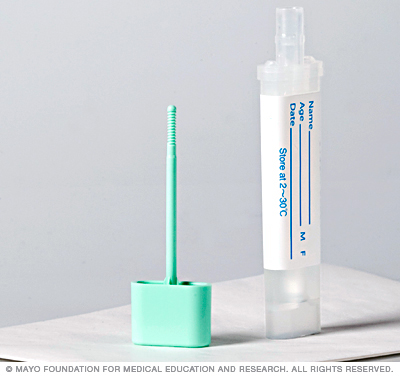 This simple fecal occult blood test kit may be used at home. First, you place the sheet of special paper on top of the water in the toilet bowl. After you have a bowel movement, you use the sampling stick to collect a small amount of stool that has been deposited on the floating paper. You then place the sampling stick with the stool sample in the collection container and snap the cap in place. You may either return the sample to your doctor or send it directly to the lab for analysis.

Your doctor will review the results of the fecal occult blood test and then share the results with you.