No incisions are needed for endometrial ablation. Your doctor inserts slender tools through the passageway between your vagina and uterus (cervix).

The tools vary, depending on the method used to ablate the endometrium. Methods might include extreme cold, heated fluids, microwave energy or high-energy radiofrequencies.

To reduce menstrual bleeding, doctors generally start by prescribing medications or an intrauterine device (IUD). Endometrial ablation might be an option if these other treatments don't help or if you're not able to have other therapies.

Endometrial ablation generally isn't recommended for postmenopausal women or women who have:

Complications of endometrial ablation are rare and can include:

In the weeks before the procedure, your doctor might:

The opening in your cervix needs to be widened (dilated) to allow for the passage of the instruments used in endometrial ablation. Dilation of your cervix can happen with medication or the insertion of a series of rods that gradually increase in diameter.

Endometrial ablation procedures vary by the method used to remove or destroy the endometrium. Options include: 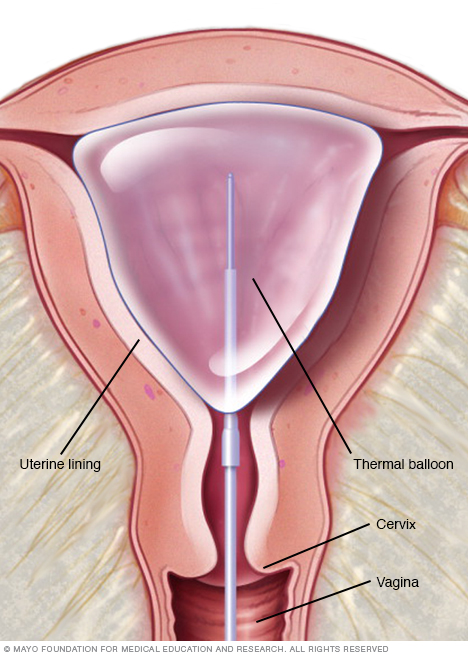 One type of endometrial ablation uses a thermal balloon filled with heated fluid to destroy the lining of the uterus (endometrium). 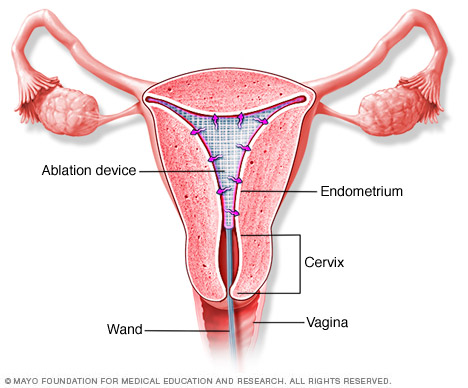 It might take a few months to see the final results, but endometrial ablation usually reduces the amount of blood lost during menstruation. Most women will have lighter periods, and some will stop having periods entirely.

Endometrial ablation isn't a sterilization procedure, so you should continue to use contraception. Pregnancy might still be possible, but it will likely be hazardous and end in miscarriage.