Egg freezing, also known as mature oocyte cryopreservation, is a method used to save women's ability to get pregnant in the future.

Eggs harvested from your ovaries are frozen unfertilized and stored for later use. A frozen egg can be thawed, combined with sperm in a lab and implanted in your uterus (in vitro fertilization).

Your doctor can help you understand how egg freezing works, the potential risks and whether this method of fertility preservation is right for you based on your needs and reproductive history.

Egg freezing might be an option if you're not ready to become pregnant now but want to try to make sure you can get pregnant later.

Unlike with fertilized egg freezing (embryo cryopreservation), egg freezing doesn't require sperm because the eggs aren't fertilized before they're frozen. Just as with embryo freezing, however, you'll need to use fertility drugs to make you ovulate so that you'll produce multiple eggs for retrieval.

You can use your frozen eggs to try to conceive a child with sperm from a partner or a sperm donor. A donor can be known or anonymous. The embryo can also be implanted in the uterus of another person to carry the pregnancy (gestational carrier).

If you use your frozen eggs to have a child, the risk of miscarriage will be primarily based on your age at the time your eggs were frozen. Older women have higher miscarriage rates, mainly due to having older eggs.

Research to date hasn't shown an increase in the risk of birth defects for babies born as a result of egg freezing. However, more research is needed on the safety of egg freezing.

If you're considering freezing your eggs, look for a fertility clinic with expertise in the field. Experts are commonly known as reproductive endocrinologists.

The Centers for Disease Control and Prevention and the Society for Assisted Reproductive Technology provide information online about U.S. fertility clinics' pregnancy and live birth rates, although data related to pregnancies using frozen eggs is limited. Keep in mind, however, that a clinic's success rate depends on many factors, such as the ages of the women it treats.

If the expense of egg freezing concerns you, ask for information about the costs associated with each step of the procedure and the annual storage fees.

Before beginning the egg-freezing process, you'll likely have some screening blood tests, including:

You'll take synthetic hormones to stimulate your ovaries to produce multiple eggs — rather than the single egg that typically develops monthly. Medications that might be needed include:

During treatment, your doctor will monitor you. You'll have blood tests to measure your response to ovarian-stimulation medications. Estrogen levels typically increase as follicles develop, and progesterone levels remain low until after ovulation.

Follow-up visits will also include having vaginal ultrasound — a procedure that uses sound waves to create an image of the inside of your ovaries — to monitor the development of fluid-filled sacs where eggs mature (follicles).

When the follicles are ready for egg retrieval — generally after 10 to 14 days — an injection of human chorionic gonadotropin (Pregnyl, Ovidrel) or another medication can help the eggs mature.

Egg retrieval is done under sedation, typically in your doctor's office or a clinic. A common approach is transvaginal ultrasound aspiration, during which an ultrasound probe is inserted into your vagina to identify the follicles.

A needle is then guided through the vagina and into a follicle. A suction device connected to the needle is used to remove the egg from the follicle. Multiple eggs can be removed, and studies show that the more eggs retrieved— up to 15 per cycle — the better the chances of birth.

After egg retrieval, you might have cramping. Feelings of fullness or pressure might continue for weeks because your ovaries remain enlarged.

The process most commonly used for egg freezing is called vitrification. High concentrations of substances that help prevent ice crystals from forming during the freezing process (cryoprotectants) are used with rapid cooling.

Typically, you can resume normal activities within a week of egg retrieval. Avoid unprotected sex to prevent an unintended pregnancy. 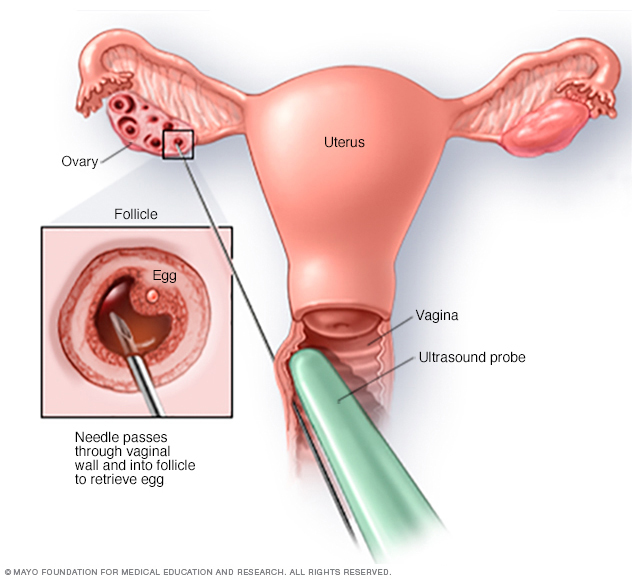 Egg retrieval is often done through a procedure called transvaginal ultrasound aspiration. During this procedure, an ultrasound probe is inserted into the vagina to identify the follicles. A needle is then guided through the vagina and into a follicle. A suction device connected to the needle is used to remove the egg from the follicle. Multiple eggs can be removed from multiple follicles in about 15 to 20 minutes.

When you want to use your frozen eggs, they'll be thawed, fertilized with sperm in a lab, and implanted in your or a gestational carrier's uterus. 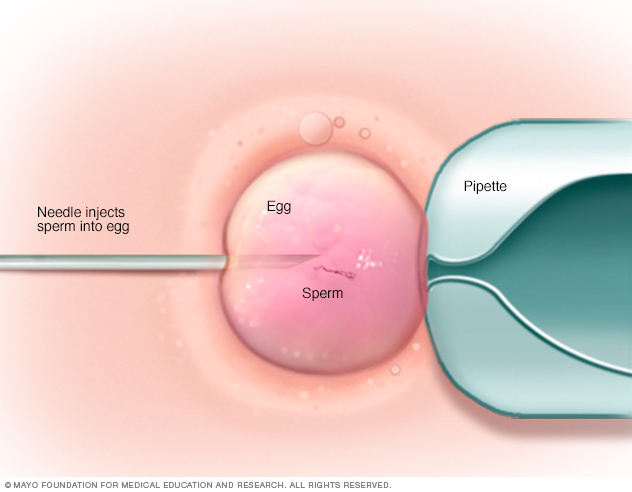 In intracytoplasmic sperm injection (ICSI), a single healthy sperm is injected directly into each mature egg. ICSI is often used when semen quality or number is a problem or if fertilization attempts during prior in vitro fertilization cycles failed.