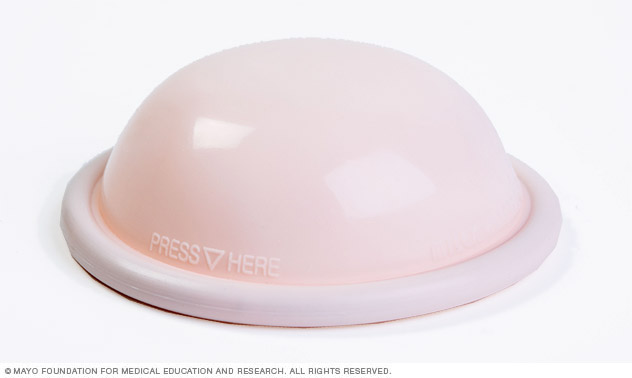 A diaphragm is a reusable rubber or silicone cup that covers the cervix. The diaphragm is inserted into the vagina with spermicide before sex to prevent pregnancy.

The diaphragm isn't appropriate for everyone, however. Your doctor may discourage use of the diaphragm if you:

For a newer type of diaphragm — the Caya diaphragm — pregnancy rates are slightly higher, with an estimate that around 17 out of 100 women will get pregnant after one year of typical use.

Consistent and correct use is essential to the effectiveness of either type of diaphragm. For example, you may get pregnant when using a diaphragm if:

Spermicide applied to the diaphragm may damage the cells lining the vagina, causing:

Always use the diaphragm with spermicidal cream, foam or gel. Avoid use of body lotions near your vagina and vaginal medications when using the diaphragm. If you're using a diaphragm and douche, wait until at least six hours after sex to avoid washing away spermicide.

Make sure you regularly check your diaphragm for puncture marks or cracks. To search for holes, hold your diaphragm up to the light and gently stretch the rubber between your fingers or fill the diaphragm with water. Replace your diaphragm at least every two years. You may need to have your diaphragm checked and possibly refitted if:

To use the diaphragm: 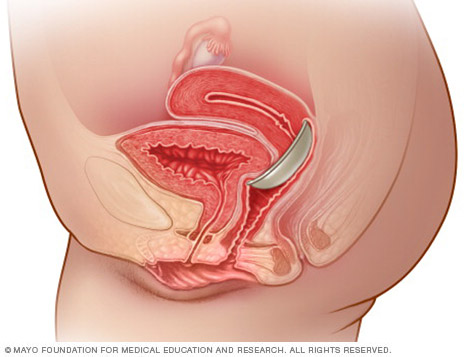 Before sex, the diaphragm is inserted into the vagina with spermicide. The diaphragm covers the cervix and is held in place by the vaginal walls.