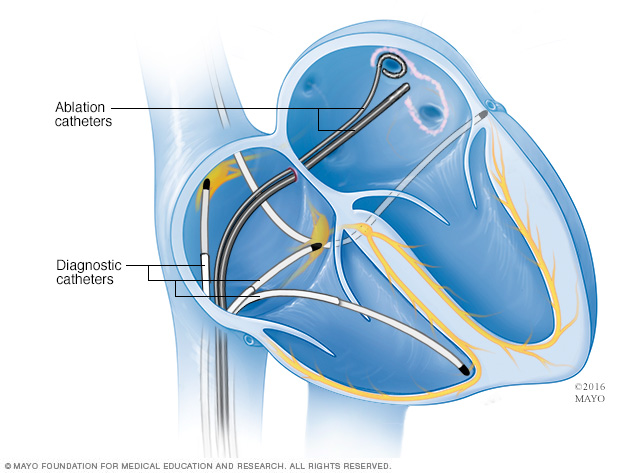 Cardiac ablation is a procedure that scars tissue in your heart to block abnormal electrical signals. It's used to restore a normal heart rhythm. Long flexible tubes (catheters) are threaded through blood vessels to your heart. Sensors on the tips of the catheters use heat or cold energy to destroy (ablate) the tissue. This illustration shows a type of cardiac ablation called pulmonary vein isolation.

When your heart beats, the electrical signals that cause your heart to squeeze (contract) must follow a specific pathway through your heart. Any disruption in the signaling pathway can trigger an abnormal heartbeat (arrhythmia).

Depending on your type of heart rhythm problem, cardiac ablation may be one of your first treatments. Other times, it's done when other medicines or treatments don't work.

Your doctor may recommend cardiac ablation if you:

Discuss the risks and benefits of cardiac ablation with your doctor to understand if this procedure is right for you.

Your doctor may order several tests to get more information about your heart condition before your cardiac ablation.

You'll need to stop eating and drinking the night before your procedure. Your doctor or nurse will tell you how or if you should continue any medications before a cardiac ablation.

Cardiac ablation is done in the hospital. A specialist will insert an IV into your forearm or hand and give you a medication called a sedative to help you relax.

The amount of sedation needed for the procedure depends on your specific arrhythmia and other health conditions. You may be being fully awake or lightly sedated, or you may be given general anesthesia (fully asleep).

Your doctor may inject dye through the catheter, which helps your blood vessels show up more clearly on X-ray images.

Sensors on the tip of the catheter send electrical impulses and record your heart's electricity. Your doctor uses this information to identify the area that is causing your arrhythmia and to decide where to apply the ablation. This part of the procedure is called an electrophysiology (EP) study.

One of the following ablation techniques is used to create small scars in your heart and block the abnormal heart rhythms:

You may feel some minor discomfort when the catheter is moved into your heart and when energy is being delivered. If you have severe pain or shortness of breath, let your doctor know.

Cardiac ablation usually takes three to six hours to complete (but it can vary a lot based on the type of arrhythmia you have).

Afterward, you'll be taken to a recovery area for a few hours where doctors and nurses will closely monitor you. Depending on your condition, you may go home the same day or spend the night in the hospital. Plan to have someone else drive you home after your procedure.

Some people feel a little sore after the procedure. The soreness shouldn't last more than a week. Most people return to normal activities within a few days after having cardiac ablation, but you should avoid any heavy lifting for about a week. 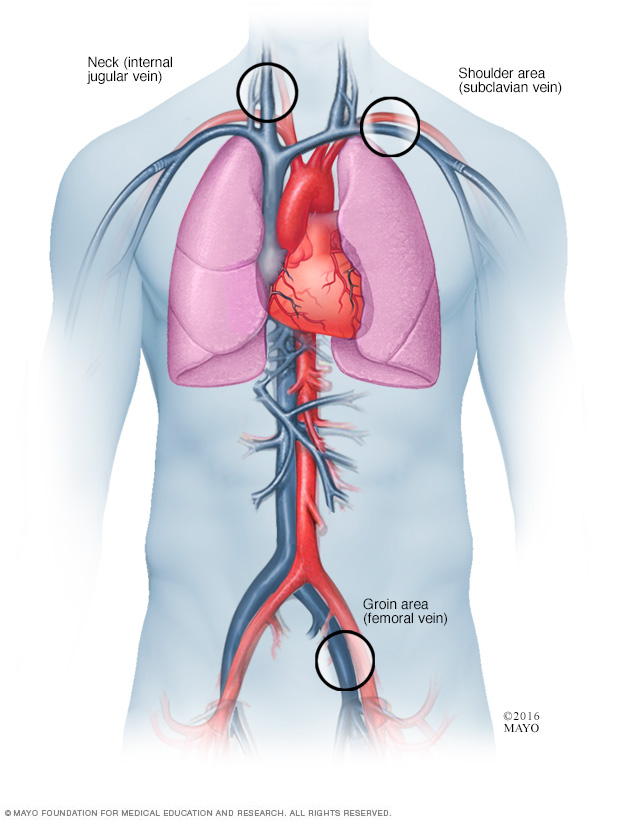 During cardiac ablation, catheters are passed through a vein in order to reach your heart. Catheters may be inserted in your groin, your shoulder or your neck.

Most people see improvements in their quality of life after cardiac ablation. But there's a chance that your abnormal heartbeat may return. If this happens, the procedure may be repeated or you and your doctor might consider other treatments. Depending on your type of arrhythmia, you may still need to take heart medication after a cardiac ablation.