Gamma Knife radiosurgery is a type of radiation therapy used to treat tumors, vascular malformations and other abnormalities in the brain.

Gamma Knife radiosurgery, like other forms of stereotactic radiosurgery (SRS), is not surgery in the traditional sense because there is no incision.

Instead, Gamma Knife radiosurgery uses specialized equipment to focus about 200 tiny beams of radiation on a tumor or other target with submillimeter accuracy. Although each beam has very little effect on the brain tissue it passes through, a strong dose of radiation is delivered to the place where all the beams meet.

Gamma Knife radiosurgery is usually a one-time therapy completed in a single day. 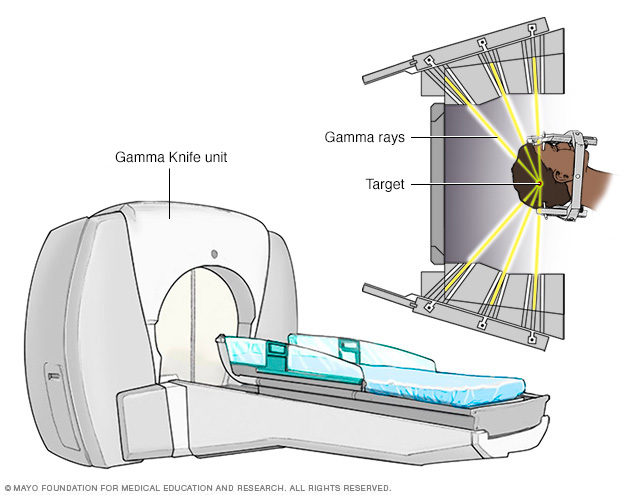 Gamma Knife stereotactic radiosurgery technology uses many small gamma rays to deliver a precise dose of radiation to a target.

Gamma Knife radiosurgery is often a safer alternative to standard brain surgery (neurosurgery), which requires incisions in the scalp, an opening in the skull and membranes surrounding the brain, and dissection into brain tissue. This type of radiation treatment is usually performed when:

Gamma Knife radiosurgery is most commonly used to treat the following conditions:

Early complications or side effects are usually temporary. Some people experience mild headaches, a tingling sensation on the scalp, nausea or vomiting. Other side effects may include:

Avoid wearing the following items during the procedure:

Tell your doctor if you:

Before the procedure begins, you'll have a lightweight frame attached to your head with four pins. This frame will stabilize your head during the radiation treatment and serve as a point of reference for focusing the beams of radiation. During this process:

After the head frame is attached, you'll undergo imaging scans of your brain that show the location of the tumor or other abnormality in relation to the head frame. The type of scan used depends on the condition being treated:

The results of the brain scans are fed into a computerized planning system that allows the radiosurgery team to determine the appropriate areas to treat, doses of radiation and how to focus the radiation beams to treat the areas. This planning process may take an hour or two. During that time, you can relax in another room, but the frame must remain attached to your head.

Children are often anesthetized for the imaging tests and during the radiosurgery. Adults are usually awake, but may be given a mild sedative to help them relax.

You'll lie on a bed that slides into the Gamma Knife machine, and your head frame will be attached securely to a helmet inside the machine.

You'll have an intravenous (IV) tube that delivers fluids to your bloodstream to keep you hydrated during the day. A needle at the end of the IV is placed in a vein, most likely in your arm.

The time needed to complete the procedure may range from less than an hour to about four hours, depending on the size and shape of the target. During the procedure:

Gamma Knife radiosurgery is usually an outpatient procedure, but the entire process will take most of a day. You may be advised to have a family member or friend who can be with you during the day and who can take you home. In some cases, an overnight stay in the hospital may be necessary.

After the procedure, you can expect the following: 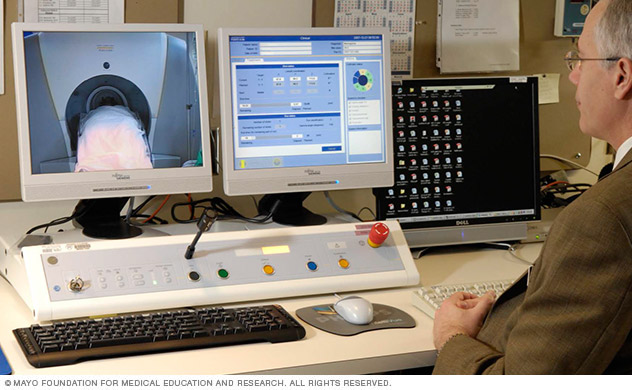 A radiation oncologist monitors the Gamma Knife procedure in progress. 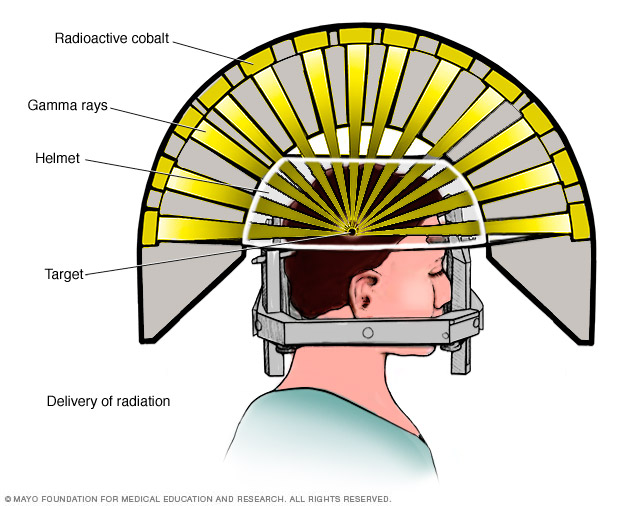 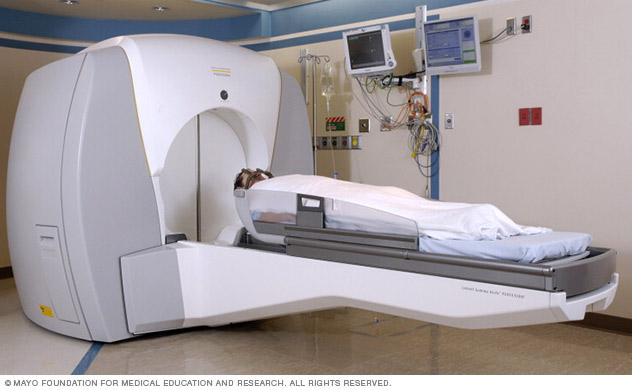 The treatment effect of Gamma Knife radiosurgery occurs gradually, depending on the condition being treated:

Gamma Knife radiosurgery uses multiple, tiny beams of radiation to shrink tumors. The left brain scan shows a pretreatment image of a noncancerous tumor — an image enhanced by the use of a special dye (contrast agent). At six months after treatment (middle image), the tumor appears slightly larger but doesn't take up as much of the contrast agent — isn't as bright in the center — indicating a positive treatment effect. At seven years (right image), the tumor appears much smaller. 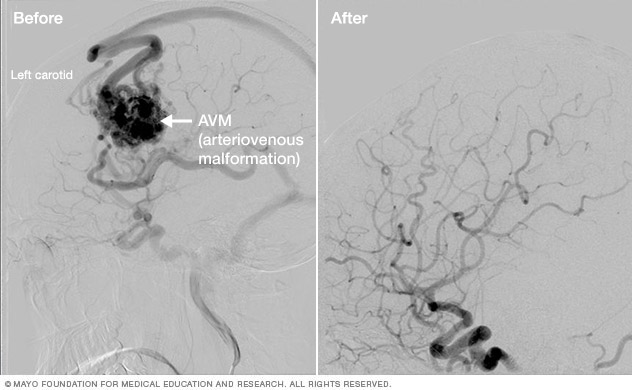 Brain AVM before and after Gamma Knife treatment 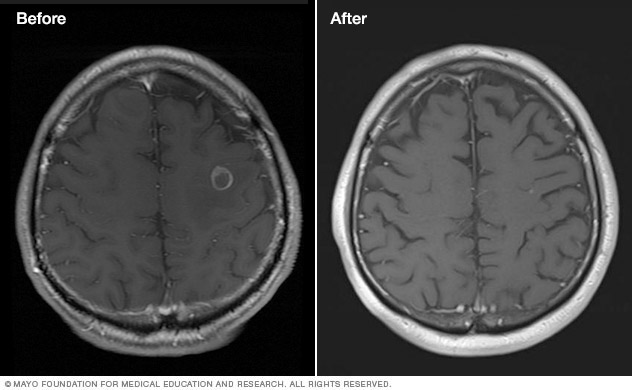 Brain tumor before and after Gamma Knife treatment