A bone density test determines if you have osteoporosis — a disorder characterized by bones that are more fragile and more likely to break.

In the past, osteoporosis would be suspected only after you broke a bone. By that time, however, your bones could be quite weak. A bone density test enhances the accuracy of calculating your risk of breaking bones.

A bone density test uses X-rays to measure how many grams of calcium and other bone minerals are packed into a segment of bone. The bones that are most commonly tested are in the spine, hip and sometimes the forearm.

Doctors use bone density testing to:

Bone density tests differ from bone scans. Bone scans require an injection beforehand and are usually used to detect fractures, cancer, infections and other abnormalities in the bone.

Although osteoporosis is more common in older women, men also can develop the condition. Regardless of your sex or age, your doctor may recommend a bone density test if you've: 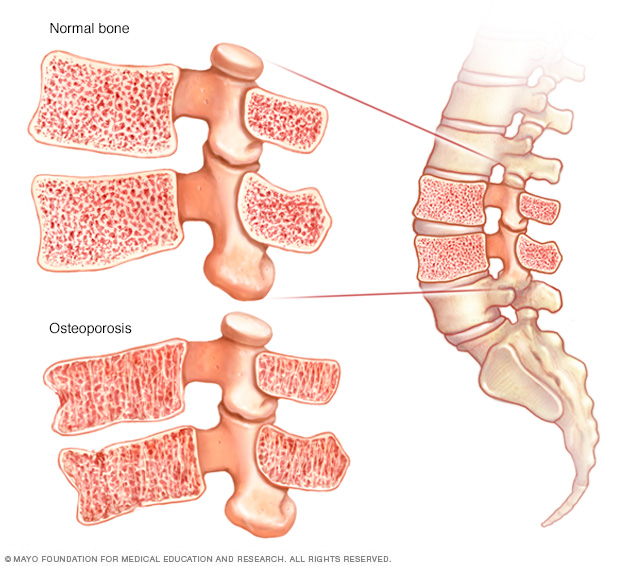 With bone loss, the outer shell of a bone becomes thinner and the interior becomes more porous. Normal bone (A) is strong and flexible. Osteoporotic bone (B) is weaker and subject to fracture.

Limitations of bone density testing include:

If you're having the test done at a medical center or hospital, be sure to tell your doctor beforehand if you've recently had a barium exam or had contrast material injected for a CT scan or nuclear medicine test. Contrast materials might interfere with your bone density test.

Avoid taking calcium supplements for at least 24 hours before your bone density test.

Wear loose, comfortable clothing and avoid wearing clothes with zippers, belts or buttons. Remove all metal objects from your pockets, such as keys, money clips or change.

Bone density tests are usually done on bones that are most likely to break because of osteoporosis, including:

If you have your bone density test done at a hospital, it'll probably be done on a central device, where you lie on a padded platform while a mechanical arm passes over your body. The amount of radiation you're exposed to is very low, much less than the amount emitted during a chest X-ray. The test usually takes about 10 to 30 minutes.

A small, portable machine can measure bone density in the bones at the far ends of your skeleton, such as those in your finger, wrist or heel. The instruments used for these tests are called peripheral devices, and are often found in pharmacies. Tests of peripheral bone density are less expensive than are tests done on central devices.

Because bone density can vary from one location in your body to another, a measurement taken at your heel usually isn't as accurate a predictor of fracture risk as a measurement taken at your spine or hip. Consequently, if your test on a peripheral device is positive, your doctor might recommend a follow-up scan at your spine or hip to confirm your diagnosis. 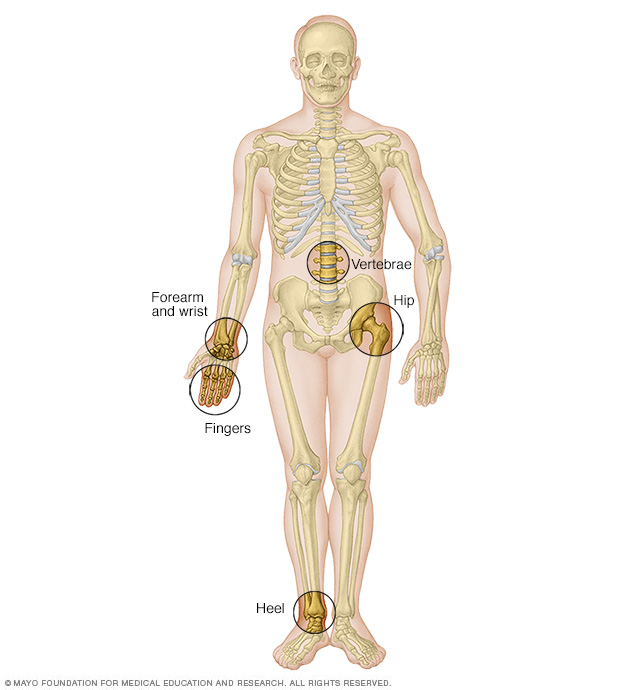 Your bone density test results are reported in two numbers: T-score and Z-score.

Your Z-score is the number of standard deviations above or below what's normally expected for someone of your age, sex, weight, and ethnic or racial origin. If your Z-score is significantly higher or lower than the average, it may suggest that something other than aging is causing abnormal bone loss. If your doctor can identify the underlying problem, that condition can often be treated and the bone loss slowed or stopped.