AV (atrioventricular) node ablation is a cardiac catheterization procedure to treat atrial fibrillation. Your doctor applies radiofrequency energy (heat) to the pathway connecting the upper chambers (atria) and lower chambers (ventricles) of your heart (AV node) through a catheter. This destroys a small area of tissue, which prevents the atria from sending faulty electrical impulses to the ventricles.

The faulty impulses are still generated, so the atria continues to quiver (fibrillate). But signals are prevented from reaching the ventricles.

After AV node ablation, your symptoms will likely improve, and you won't need to take drugs to control your heart rate. But you may need to take blood-thinning medications to reduce the risk of stroke. A permanent pacemaker is implanted to make the bottom chamber contract with a normal rate.

AV node ablation is done to safely correct the heart rate and ease symptoms of people with atrial fibrillation that hasn't responded to medication or other interventions. It's generally considered as a last resort for correcting atrial fibrillation. Also, this procedure is more likely to be considered for older patients because it requires the placement of a pacemaker.

To be considered for AV node ablation and pacemaker implantation, you will need to undergo several tests. If you are scheduled for the procedure, your care team will talk with you about how to prepare and what to bring to the hospital.

When it's time for your procedure, you will be moved to a specially equipped procedure room called the cardiac catheterization laboratory. Your doctor will insert catheters. He or she then uses electrodes in one of the catheters to apply heat (radiofrequency energy) to destroy the electrical connection between the upper and lower heart chambers (AV node). This blocks the faulty electrical impulses.

Once the AV node is destroyed, your doctor implants a small medical device to maintain a heart rhythm (pacemaker), unless your pacemaker is already in place. You will need a pacemaker for the rest of your life. 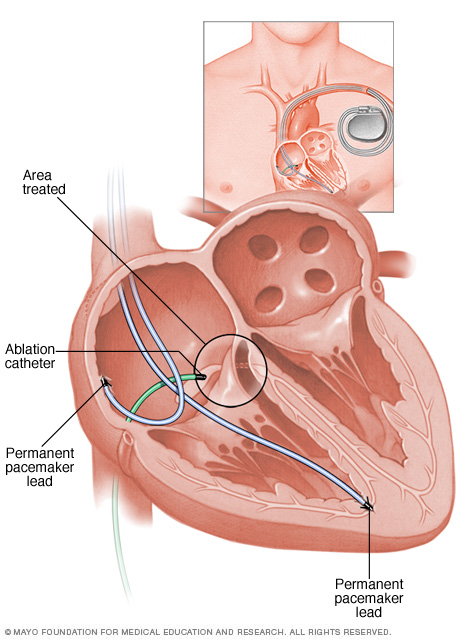 In atrioventricular (AV) node ablation, doctors use radiofrequency energy to destroy the electrical connection between the upper and lower heart chambers (AV node), blocking the heart's electrical impulses. Once the AV node is destroyed, doctors then implant a small medical device to maintain a heart rhythm (pacemaker).

AV node ablations have a high success rate. After the procedure, your heart rate is controlled by the implanted pacemaker, so you won't need to take drugs for heart rate control. You may need to take blood thinners, depending on your risk of stroke.